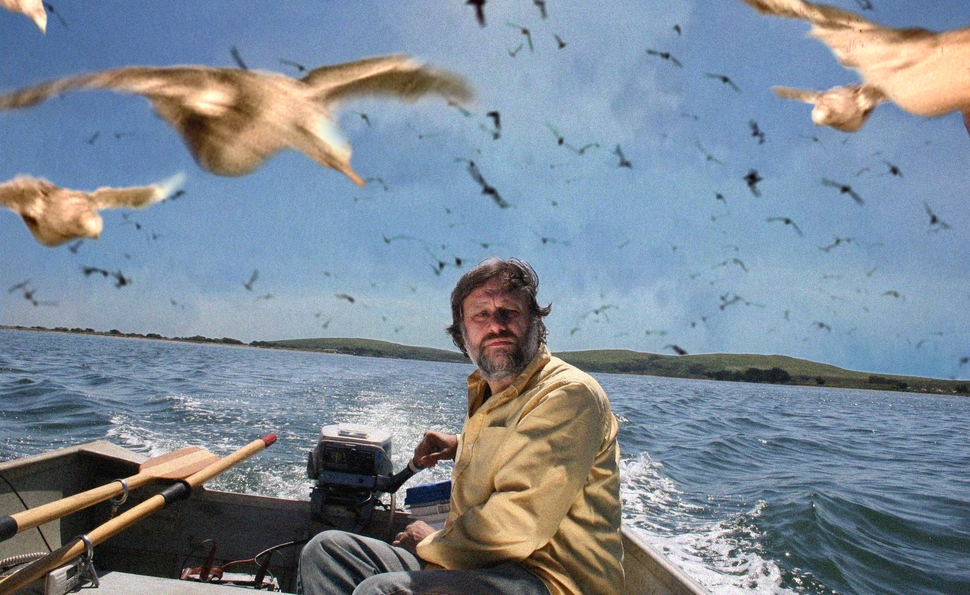 The Pervert’s Guide To Ideology

The 2006 cine-essay The Pervert’s Guide To Cinema, directed by Sophie Fiennes and written by and starring Slavoj Zizek, is a three-part, 150-minute lecture on the sociological and psychological meanings of a handful of popular movies, such as Psycho, The Matrix, and Blue Velvet. Fiennes and Zizek’s new collaboration, The Pervert’s Guide To Ideology could’ve easily been called The Pervert’s Guide To Cinema: Part Four. It follows the same format, with Zizek standing (or sitting) in famous film locations and talking, rapidly and nonstop, in a thick Slavic accent. The main difference is that where Guide To Cinema covered a range of topics, Guide To Ideology zeroes in on the rigidity of personal belief, as revealed in films as diverse as The Sound Of Music, The Dark Knight, and Jaws. And it isn’t just about cinema. Zizek digresses to talk about Coca-Cola, the Kinder Surprise Egg, the Catholic church, the heavy-metal band Rammstein, Nazi anti-Semitism, grassroots protest movements, and more.

As with Guide To Cinema, viewers’ tolerance for Guide To Ideology will likely be exclusively tied to their tolerance for Zizek: his ideas, his voice, his gestures, and his incessant analysis of every aspect of culture. This is not a conversation. There’s no pushback to any of Zizek’s assertions—no alternate reading of “Climb Every Mountain” to argue that maybe it isn’t an expression of Catholic permissiveness, or that the ultimate message of James Cameron’s Titanic is not that rich people have the right to leech the vitality of the poor. And Zizek doesn’t build a cohesive argument over the course of the film’s 136 minutes; he just pivots from point to point as though he were reading notes for a paper, not the paper itself. At a certain point, the excitable “What does this really mean?” approach becomes self-defeating, because all the observations are treated with the same level of gusto. Zizek could probably make the exact opposite points from what he’s saying and come across as equally credible.

But Fiennes’ methods of framing this material make a huge difference in how palatable it all is. By perching Zizek atop a toilet in the latrine from Full Metal Jacket, or having him lie on a shabby bed like Travis Bickle from Taxi Driver, she creates a sense of personal identification between the lecturer and the lecture. Zizek doesn’t exempt himself when he describes how Starbucks enables consumers to feel virtuous when they overpay for coffee, or when he talks about how A Clockwork Orange and West Side Story depict violent youth as far from mindless products of dire social conditions. The recurring message in The Pervert’s Guide To Ideology is that the cultural order thrives on contradictions: The ultimate desire is to continue feeling desire, religion gives cover to immoral acts, racism is partly a function of envy, and so on. Zizek’s eventual assertion is that the only avenue to social change is to become aware of all of this, and to push through regardless.

The other advantage to Fiennes’ approach is that it makes Zizek’s spiel more subtly playful. It’s hard to bristle too much at any movie that uses as its first example the reality-revealing sunglasses in John Carpenter’s cult classic They Live, and as one of its final examples the mass orgy in Michelangelo Antonioni’s Zabriskie Point (which to Zizek is a symbol of how revolutions become hegemonic). Taken in the right spirit, The Pervert’s Guide To Ideology is a lot of fun, like watching a movie with a friend, then going out for drinks and talking late into the night. Just don’t expect to get a word in edgewise.