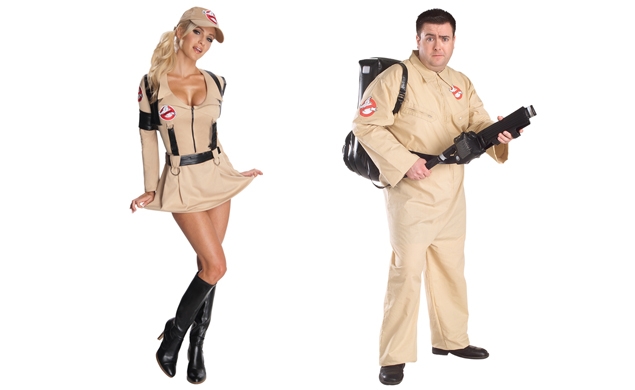 Yesterday afternoon, the announcement that Sony will be producing an “all male” Ghostbusters film as a franchise companion to the previously announced, much-discussed “all female” Ghostbusters whipped the Internet into a frenzy the likes of which we haven’t seen since, well, the announcement of an all-female Ghostbusters. As with that previous announcement, battle lines were quickly drawn between those who think this is a good idea and those who think this is a bad idea, with a third group standing outside the fray scratching their heads and saying, “Wait, what?” It’s a weird, confusing announcement, one that undercuts a project that’s garnered Sony a huge amount of mostly positive buzz, outside of a thankfully small, annoyingly loud minority waving the tired, tattered old “ruined childhood” banner. The timing is even more confusing, with this announcement coming before Paul Feig’s still-not-titled-but-I’m-just-going-to-keep-calling-it LadyBusters has started production in earnest. (The film begins shooting in June.) Before either film has left the starting gate, they’ve already been positioned as competitors.

Sure, that’s not what Sony would have us believe, what with the simultaneous announcement that the studio is forming “Ghostcorps,” a production company headed up in part by original Ghostbusters primaries Ivan Reitman and Dan Aykroyd. After years of Aykroyd’s idle threats, it seems Ghostbusting is back in a big way, and Sony is going to be the shepherd of this grand new (old) franchise and all its many tentacles. You wanted a new Ghostbusters, world? Well, Sony’s gonna give you two for the price of two! There’s room for everybody, assuming everybody wants to shell out for two separate movies based on another movie they committed to memory a couple decades back.

Having two Ghostbusters, one led by women, one by men, is just a new form of an old sort of brand extension: the distaff counterpart. The Hardy Boys begat Nancy Drew. The Chipmunks begat The Chipettes. Hercules begat Xena. One for the boys, one for the girls, double the merchandising opportunities. Everyone wins, but Sony especially wins—if winning just means making all the money. But with this announcement, Sony has turned what’s unfortunately still a revolutionary action—rebooting a franchise with an all-female cast in place of a male one—into the same sort of tired gender-line toeing that’s kept the entertainment industry chugging for decades.

The idea that there is “girl entertainment” and “boy entertainment” is outmoded but annoyingly persistent, based more in advertising opportunities than how most people actually consume entertainment. It’s not just film where we see this—the toy industry, with its insidiously color-coded products, is a particularly guilty party—but this Ghostbusters hubbub provides a much-needed opportunity to question why we as a culture continue to feel the need to cater individually to boys and girls, or men and women, based on their gender first and foremost. Feig’s Ghostbusters has now become the cinematic equivalent of a pink razor: an inherently gender-neutral entity gussied up in a gender-specific way that tells women, “This is for you, not for boys.” By offering a Ghostbusters for boys and a Ghostbusters for girls, Sony is implicitly telling potential audiences, “This is for you, not for them.”

That sort of us/them mentality, even if it stems from a well-meaning (read: money-grubbing) place, breeds competition, and turns this idea of dual Ghostbusters into dueling Ghostbusters. Barring a statistically improbable fluke, one of these movies is going to be more successful than the other—and based on the rumor that the all-male Ghostbusters will star box-office-gold-miners Chris Pratt and Channing Tatum, it’s dispiritingly obvious which is likely to make more money. The outcome of that competition is going to affect how Ghostcorps proceeds with its inevitable sequels, and how the industry views the potential of future female-led projects.

Hopefully, once Feig’s and the Russos’ films actually hit theaters, the lure of new big-screen ghostbusting action will lure audiences equally, regardless of whether they identify as men, women, or some other point along the gender spectrum. But at this point, all we can do is critique the idea of a male/female Ghostbusting dyad, and as it appears right now, this idea stinks. And not because there’s already a male-led Ghostbusters—two, actually, plus a couple of cartoon series. No, it’s because a new Ghostbusters that presents a team that’s the same gender as the original is going to default to the “real” Ghostbusters reboot, while Feig’s is going to be the “other,” the spin-off; it’s going to be the Chipettes, even though, technically speaking, it came first. (Worth mentioning: The Chipettes were awesome, and have all the best songs in the 1987 team-up movie The Chipmunk Adventure.)

Men and women don’t need their “own” movies. Individual viewers gravitate toward movies based on individual tastes and interests, and if women tend to gravitate toward “female-friendly” movies, it’s at least partly because they’ve been conditioned to do so by a deeply ingrained advertising and marketing machine that sees them as separate from (but presumably/hopefully equal to) male viewers. Rather than sticking with the courageous action of bucking that long-standing trend, Sony has chosen to double down on its investment in a cowardly, craven manner that deepens and reinforces the rift between male and female moviegoers, at least in the eyes of those responsible for getting movies made. In bringing Ghostbusters into the modern age, Sony has regressed back to one of the oldest, most problematic entertainment-industry fallacies. Forget ghosts: Inherently gendered entertainment is what really needs busting.

ETA: ETA: After this article went to press, it was revealed that the newly announced film may not be as “guy-centric” as initially reported, though it is based in a concept that “spins out of the chemistry between real-life friends Channing Tatum and Chris Pratt,” both of whom, last time I checked, are dudes. But more to the point, it’s also suggested that this new Ghostbusters, along with Feig’s, is part of a planned “expanded universe” that will eventually see the merging of the two films in an Avengers-style crossover. Assuming this does come to fruition—and that’s a big assumption—it still positions Feig’s movie as the “other,” the girl-friendly portion of this presumed universe. My objection stands.