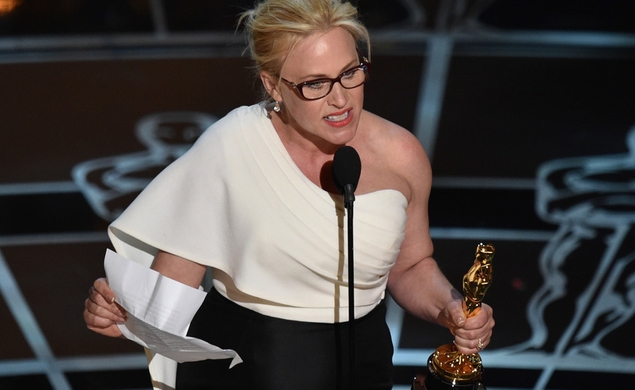 Harbinger of doom: Scarcity of female directors
Ready for our installment of “this week in depressing stats”? According to an L.A. Times analysis, the number of major studio films directed by women has been “stubbornly low” over the past five years, hitting a “high” of 8.1 percent in 2010 and falling to 4.6 percent last year. You might recall that last Sunday at the Oscars, all of the directing nominees were men; no woman has been nominated for directing since Kathryn Bigelow won for The Hurt Locker in 2010. The studio with the highest percentage of films directed by women over the past five years was Sony Pictures, specifically Sony Pictures Classics (but, you know, now Amy Pascal’s gone); the lowest was Warner Bros., which actually has “bros” in its name, so.

Seems like it’s sort of a catch-22: The studios want to hire somebody with experience, but they’re not giving women the chance to gain that experience. Their best bet is independent film, where, as director Lynn Shelton puts it, “You can buy a camera for $1,500. It’s insane how easy it is to make an independent movie. You’re not dependent on other people allowing you to do it.” That’s partly because, according to the piece, “risk is considered a masculine activity,” and “women are perceived to be less trustworthy with resources.” So true. I lost all my tampons and hairdryers just last week.

Harbinger of doom: Amy Pascal’s replacement is a white dude
Remember several paragraphs ago, when we talked about how Sony did the best job of hiring female directors last year? One of the driving forces behind this was Amy Pascal, who’s now gone off to Spider-man-ier pastures. Is her replacement another woman, perhaps even—dare I say it—a woman of color? Hell no. It’s a white dude. How imaginative, Sony.

In an attempt to predict how things might go under Tim Rothman’s reign, I did a Google News search on “Tim Rothman” and “women” and found this lovely quote, from a New Yorker piece about What’s Your Number, in which Anna Farris plays a “hard-partying 30-something who reads in Marie Claire that if a woman sleeps with more than 20 men, she’ll never get married.” “I voted for a lower number, like one,” said Rothman. “There’s an innocent quality to Anna’s sexuality, and an inherent kindness to her, that makes it possible to make a movie about sex and have it feel like she’s still a sweetheart.” Wait, women can have sex and still be sweet? Can’t. Compute.

Rothman sounds like he’s always been a perfect fit for the overtly sexist film industry, and I’m sure he’ll be quite happy at Sony.

Sign of hope: Proof that diversity sells
Just yesterday, UCLA’s Ralph Bunche Center released a report, called “Flipping The Script,” that can be boiled down to two words: Diversity sells. The study looked at theatrical film releases in 2012 and 2013, and all broadcast, cable, and digital platform TV programs from 2012-13, and concluded that audiences are demanding and more actively viewing programs with diverse casts and storylines. “Business as usual in the Hollywood industry may soon be unsustainable,” wrote Darnell Hunt, the head of the center. “Evidence from this report (and its predecessor in the series) shows clearly that America’s increasingly diverse audiences prefer diverse content created with the input of diverse talent.”

The center issued a report last year showing that women and minorities were “falling far short in making inroads into influential Hollywood positions compared with the actual demographics of the U.S. population.” Nothing speaks to Hollywood like money, so let’s hope that these results bring about actual change.

Middle of the column, middle of the road: The Oscars
There was so much Female Stuff going down at the Oscars, you guys. Let’s break it all down:

Patricia Arquette’s gender-based pay-gap comments. During her Best Supporting Actress speech, Patricia Arquette made an appeal for equal pay:  “To every woman who gave birth, to every taxpayer and citizen of this nation, we have fought for everybody else's equal rights,” she said. “It’s our time to have wage equality once and for all, and equal rights for women in the United States of America.” It was simplistic, sure, but it was important nonetheless. Meryl Streep and Jennifer Lopez loved it, Twitter loved it for a few minutes, and then all hell broke loose when, backstage, Arquette clarified her comments further: “The truth is, right under the surface, there are huge issues that are at play that do affect women, and it’s time for all the women in America and all the men that love women and all the gay people and all the people of color that we all fought for to fight for us now.”

Oof. As RH Reality Check’s Andrea Grimes put it, this was a spectacular “intersectionality fail.” Arquette’s second statement implied that the LGBT community and people of color have already achieved equality; suggested that fighting for each others’ equality is a quid-pro-quo, charity-based game; and excluded women of color and LGBT women who still count as “women who deserve equal pay,” and who statistically make even less than white women do. What happened to “feminism is for everyone,” my girl Patty?

After the backlash, Arquette took up the conversation yet again on Twitter: “Wage equality will help ALL women of all races in America,” she wrote. “It will also help their children and society. Women have been basically paying a gender tax for generations. I have long been an advocate for the rights of the #LBGT community. The question is why aren’t you an advocate for equality for ALL women? If you are fighting against #Equalpay you are fighting for ALL women and especially women of color to make less money than men.”

I appreciate and understand Arquette’s intent, and chalk the goofs up to potential ignorance or an unintentional mishandling of her own message. That message, while imperfect and exclusionary, is still necessary; even more significantly, Arquette spurred a national conversation about feminism, intersectionality, and the pay gap. Isn’t it a little sad, though, that an Oscar speech advocating for simple gender equality shook everybody up so much? Discussions like these should be status quo by now.

The red carpet. Supporting a campaign called #AskHerMore, Reese Witherspoon put red-carpet reporters on blast for asking women about their fashion choices instead of the ones they make on screen. Did she succeed in changing the conversation? Eh, kind of? While some actresses took the opportunity to make empowering statements, others were directed in similarly stereotypical directions. Take Naomi Watts, who ended up talking about cooking—specifically, the frittata she’d made earlier—and how she’d “starved herself” until the ceremony. Like Arquette’s speech, #AskHerMore was an overly simplistic statement, and one that didn’t extend far outside of the insular Oscars ceremony, but it was an admirable effort on Witherspoon’s part. Let’s #DoMore and #DoBetter next year.

The transparent overcompensation for the lack of nominee diversity. Due to the pre-Oscars outcry about the ceremony’s lack of diversity (specifically, its Selma snubs and its whitewashed acting categories), the Academy bent over backwards on Sunday to prove itself inclusive. No fewer than 15 non-white presenters and performers took the stage, including Eddie Murphy, Jennifer Lopez, Viola Davis, Idris Elba, and Oprah. Even host Neil Patrick Harris seemed to zero in on black audience members, singling out Octavia Spencer for a painful bit involving a briefcase and forcing David Oyelowo to stand up and awkwardly demonstrate his British accent.

While it’s wonderful (though, again, depressing that it’s not yet the norm) to see an Oscars broadcast that isn’t a sea of white faces, the move reeked of Academy pandering and of “too little, too late.” How about next year, start actively seeking out and recognizing the work of people who aren’t white men, Academy? (Regardless, major props go to Common and John Legend, whose rendition of “Glory” was stunning, and whose speech, in which Legend lamented the number of black men in prison and stated, “Selma is now because the struggle for justice is now,” was incredibly important and powerful.)

Sign of hope: Young women taking up the feminist mantle
Io9 has a heartening story about a young girl who could basically be writing this column: 11-year-old Rowan Hansen, who wrote a letter to DC Comics asking why there aren’t more female superheroes. “It’s not like the male superheroes are better than the female superheroes, but there are just more of them,” she wrote. “If Batman gets to wear armor, then why doesn’t Wonder Woman get to wear armor? I know that she’s kind of invulnerable, but it would still be nicer if she didn’t have to wear a bathing suit all the time.” Did you know the word “invulnerable” at 11?

In response, DC Comics tweeted at her, “Thanks, Rowan. We agree, we're working hard to create more superhero fun for girls!” (“Superhero fun for girls” is now the comic-book equivalent of the Lego Movie’s “female stuff” that gave this column its name.) Hansen later appeared on the Today Show, where she was plied with gifts from DC, including a drawing showing her as a superhero. Apparently this—and that stupid tweet—merited an eye-roll from Hansen, too: “I don’t want people to think, ‘Oh yeah, they responded to her. Now it's over.’ I want people to keep trying to make this happen. Because it’s very important to me.” Damn, Rowan. You keep at it, girl. We need you.

Overall, was this a good, bad, or neutral week for women in movies, Rachel?
This week was just a hot mess, y’all. I’m exhausted from a) thinking about all of this Female Stuff and b) furiously typing about it. I’m gonna have to call it straight neutral—the good and bad weighed equally in the balance. On one hand, we’ve got stars like Patricia Arquette advocating for feminism; on the other hand, we’ve got stars like Patricia Arquette advocating for feminism quite poorly. While younger women like Rowan Hansen are eager to take up the feminist mantle, older women like (admittedly less-than-perfect) Amy Pascal are being replaced by old, slut-shaming white dudes. And while this week boasts a larger-than-usual number of female-centric projects and films, it also brings news that the women at the helm of these types of projects are getting less work than ever before.