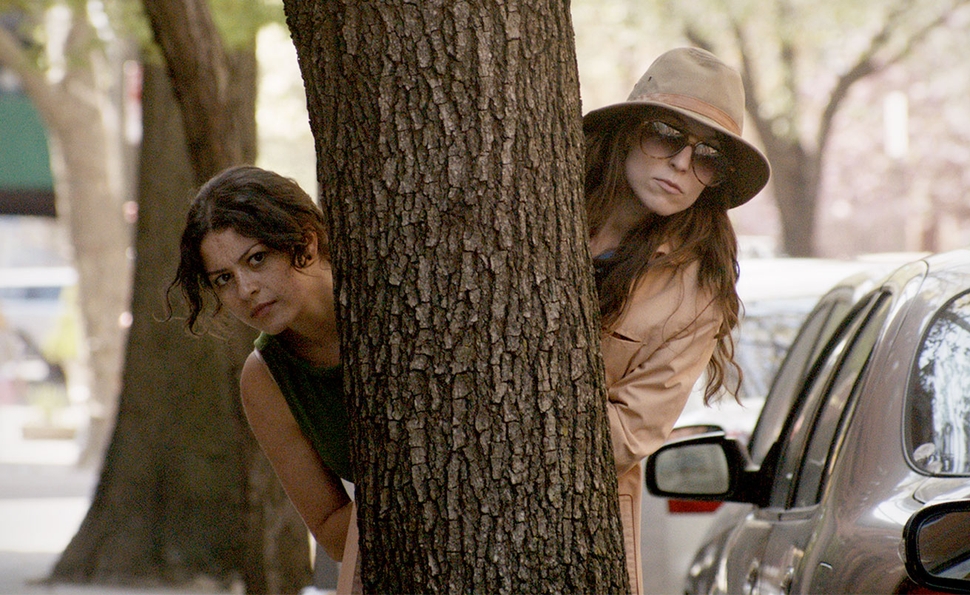 At heart, Lawrence Michael Levine’s Wild Canaries is yet another indie film about arty, chatty New Yorkers who have trouble committing to jobs or relationships. The big difference is that Wild Canaries is also a murder mystery, and that one wrinkle is enough to give the movie an energy and a sense of focus that carries through almost from start to finish. It’s amazing what a little plot and a little visual style will do to freshen up the familiar.

Levine also stars as Noah, a grumpy 36-year-old living with his much younger, somewhat wide-eyed fiancée Barri (Sophia Takal), and Barri’s lesbian best friend Jean (Alia Shawkat). Noah works with his ex-girlfriend Eleanor (Annie Parisse)—also a lesbian—and occasionally plays poker with his landlord Damien (Jason Ritter), a degenerate spendthrift with anger issues. Nobody in this movie seems all that happy with their partners, their homes, or what they do for a living, and everybody is casually looking for something new to do, and someone else to be. Then an elderly neighbor turns up dead under mysterious circumstances, and the otherwise-idle Barri takes it on herself to play amateur detective, dragging along a reluctant Noah and an eager Jean.

Levine rises to the challenge of making his own, offbeat private-eye picture. About three-fourths of the time, Wild Canaries is shot like a typical urban-relationship dramedy, mixing restless camera moves with tight close-ups. But whenever the sleuthing starts, Levine works in snap-zooms and old-fashioned iris-in/iris-out effects, all while Michael Montes’ sprightly retro score recalls the mainstream Hollywood comedies of the 1970s. At times, the vibe of the film resembles Peter Bogdanovich’s breezy screwball homages, crossed with one of Woody Allen’s shaggy 1990s/2000s genre exercises. (The movie’s similarities to Manhattan Murder Mystery in particular are hard to ignore.)

Yet even when Wild Canaries’ characters are breaking into apartments and hunting for clues, they talk like they’re in an entirely different kind of movie—one where couples arguing about whether they have a future together is just as important as whether they’re living in the same building as a killer. The disconnect between Wild Canaries’ two modes is sometimes too wide, making the movie come across either as a sloppy mystery or a scatterbrained melodrama. More often, the mix keeps the film lively and unpredictable. One minute, Noah and Barri are passive-aggressively talking through their financial problems; then suddenly, the music cues pep up, Mark Schwartzbard’s cinematography changes gears, and Noah and Barri are winding through the streets of Brooklyn, tailing their dead neighbor’s creepy son Anthony (played by Kevin Corrigan).

Mostly, the genre-play gives Levine a mandate to keep his characters sharp and well-defined. Wild Canaries’ plot takes some strange, borderline-preposterous turns, which work because they’ve been set up by how these people have behaved from the beginning of the movie—whether it’s Noah’s incompetence when it comes to modern technology, or Barri’s romantic optimism and can-do attitude. It’s rare for a film that feels this loose to be populated by men and women so precisely constructed that they could’ve been pulled right out of a novel. That’s Levine’s real accomplishment here. He’s found some barely explored ground in the overlap between the modern slice-of-life and the whodunit. He’s like the cinematic equivalent of a remodeler, who rips the floor up from one kind of movie to discover a sturdier, more handsome kind hidden just below.