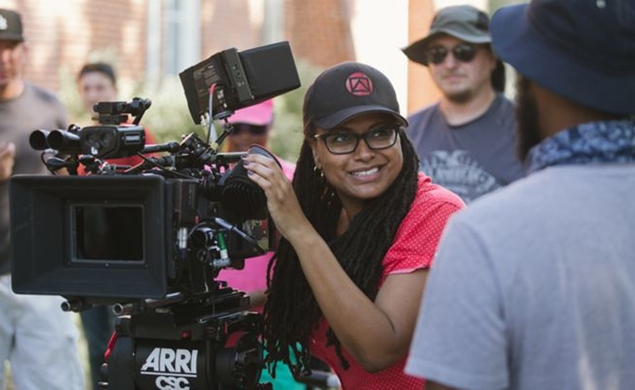 Harbinger of doom: The industry’s unchanging dearth of diversity
This week, The Chicago Tribune published a story called “Best Picture nod for Selma caps big year for black women.” The piece kicks off with this fact: “Three black women released movies in 2014, more than ever before in a single year. And one of them is a contender for the Motion Picture Academy’s top prize.” A triumph? Not really. That’s three out of 373 films that came out in theaters. The piece also notes that, over the past seven years, only three black female filmmakers were connected to the top 700 movies; over the past decade, more than 95 percent of the directors of top-grossing films over the past decade were made by men; and almost 90 percent of those filmmakers were white.

Selma’s Ava DuVernay, Beyond The Lights’ Gina Prince-Blythewood, and Belle’s Amma Asante all weigh in on the so-called “big year for black women.” “Three is not enough,” says DuVernay. “While we celebrate the three, we’re talking three in the hundreds of films that came out last year between the U.K. and the United States. Unless (our success) equals more women being able to do the same thing next year—which legacy says is probably not going to happen—then we’re still at the same place.” All three insist that the number of female filmmakers of any ethnicity working in Hollywood has remained basically unchanged for the past 20 years—hovering around 5 percent—and cite financing and marketing (specifically, studios looking at women as a “niche market”) as their primary roadblocks.

The AP’s Jake Coyle makes a similar point about this year’s Oscar race. He recalls the progress made last year when Lupita Nyong’o won her Oscar for Twelve Years A Slave—specifically during her speech, in which she talked about the importance of on-screen representation of what she called “dark beauty”—and looks at this year’s white-washed nomineee pool as a setback. It’s a pattern, says Coyle: “Whenever change seems to come, a frustrating hangover follows.” Spike Lee agrees, telling Coyle, “Every 10 years we have the same conversation.”

Some troubling stats follow: An Associated Press survey of the Academy’s voting history since the first Academy Awards in 1929 shows that in those 87 years, nine black actors have won Oscars, four Latinos and three Asians, a record that doesn't even speak to other categories like best director, where only one woman (Kathryn Bigelow) has won. The number of non-whites to be nominated for Best Actor or Best Actress has nearly doubled in just the last two decades, but the 9.4 percent of non-white acting nominees over the Academy’s history is about four times less than the percentage of the non-white population.

The numbers are a reflection of the film industry at large, but also a reflection of the 94 percent white and 77 percent male membership of the Academy, and of our culture’s lack of inclusiveness in terms of both gender and race. Please hold while I go cry into a giant bottle of wine.

He tells EW:  “I actually think it’s empowering. Some bloody feminists are accusing me of being a misogynist. I’m like, ‘It couldn’t be further from the truth.’ It’s a celebration of women and the woman being empowered in a weird way in my mind, which will cause a big argument again I’m sure. It’s meant to be tongue-in-cheek and crazy… For the 20 percent who were offended by it, there are 80 percept who are rolling around laughing so hard. Those 20 percent of people just need to lighten up a little bit. It’s about pushing boundaries and having a bit of fun. It’s not meant to be offensive, and it’s definitely not misogynist or any attack on women.”

Oh, okay, Matthew Vaughn. We’ll just let you, a successful male director, mansplain feminism and female empowerment, and decide what is and what isn’t misogynist or offensive to women. Thanks for letting us know that the scene was just meant to be “empowering in a weird way” for us “bloody feminists.” Sorry some of us got offended by your anal-sex joke! We’re just really boring and stupid and don’t understand your high-level humor.

Harbinger of doom meets sign of hope: The reaction to Amy Schumer’s Trainwreck trailer
At the end of last week, a trailer was released for Trainwreck, which Amy Schumer’s writing, directing, and starring in. The end! No, of course it’s not the end. The reactions to the trailer ranged from positive and life-affirming to totally denigrating and terrible. See: Hollywood Elsewhere’s Jeffrey Wells’ post on the flick. Actually, don’t see it; I’ll just share it with you here so he won’t get more page views:

“With Trainwreck (Universal, 7.17), director Judd Apatow is once again introducing a chubby, whipsmart, not conventionally attractive, neurotically bothered female comic to a mass audience — first Melissa McCarthy in Bridesmaids (’11), then Lena Dunham in HBO’s Girls (’12) and now Amy Schumer, the star and writer of Trainwreck as well as the star of Comedy Central’s Inside Amy Schumer. She’s obviously sharp and clever and funny as far as the woe-is-me, self-deprecating thing goes, but there’s no way she’d be an object of heated romantic interest in the real world. And yet that’s the apparent premise of Apatow’s film. Schumer’s wide facial features reminded me of a blonde Lou Costello around the time of Buck Privates, or Jennifer Aniston’s somewhat heavier, not-as-lucky sister who watches a lot of TV. Don’t look at me—I’m not the one who made her the star of a film about a plucky, free-spirited girl that a lot of guys want to bang. You know who would be better in a film like this? An actress who’s nicely attractive, has the funnies and the soulful stuff besides? Jenny Slate.”

This is the harbinger of doom part. There’s not one sentence in this summary that isn’t wholly sexist, disgusting, small-minded, and deeply cruel. Who is giving this man a platform? Also, is anybody sleeping with him? If it’s you, please stop. For all of us.

The sign of hope part? Schumer responded in the most perfectly Schumer-y way ever: By posting a photo of herself sporting underwear on stage—looking great, obviously—with a caption that read, “I am a size 6 and have no plans of changing. This is it. Stay on or get off. Kisses!” She then spoke with USA Today, saying, “It was such an example of sort of the reason for trolling. It seems like a rewarding experience for people who do that stuff. From the bottom of my heart—I could not care less.”

In under 24 hours, Schumer managed to shame both Wells and the concept of fat-shaming altogether, likely empowering millions of women and embarrassing millions of Jeffrey Wells-esque assholes in the process. Amy Schumer, I fucking love you; never change.

Harbinger of doom: Michael Cimino and “the thing the girl made about the box.”
In other regressive comments of the week, The Hollywood Reporter talked to Deer Hunter director Michael Cimino, marking his first interview in 13 years. He talked about winning the Oscar for Deer Hunter and current war movies, including American Sniper. He also dropped this lovely quote. “There's got to be some extreme emotional reaction for the movie to be doing that well. It hasn't happened since Deer Hunter. I mean, all the movies that have been made about war, from Platoon to the thing the girl made about the box …” The interviewer interrupted him: “The Hurt Locker, directed by Kathryn Bigelow.” Cimino’s reply: “The Hurt Locker, right. (Laughs.) There’s been none of that.” Cimino also decried rumors that he’s going through a gender transition, calling them an “insult” and “a personal assassination.” Seriously, dude?

Tim Grierson broke it down best on Twitter, pointing out that during Bigelow’s Hurt Locker follow-up Zero Dark Thirty, when Maya (Jessica Chastain) is finally in the same room as Bin Laden’s dead body, you can faintly hear someone in the background referring to her as “the girl.” “Even in her moment of triumph, Maya (like Bigelow) is still ‘the girl.’ Such a perfectly ironic capper to the raid sequence,” writes Grierson. And such a perfect way to encapsulate a large, sexist swath of Hollywood, Tim.

Overall, was this a good, bad, or neutral week for women in movies, Rachel?
Bad. Props to Ava DuVernay, Amma Asante, and Gina Prince-Blythewood for championing women of color and Amy Schumer for championing body acceptance. It’s important and difficult work, changing the narrative for women in Hollywood and pop culture, and, ideally, their status as second-class-citizens. But ultimately, the numbers are a clear indicator that we’re all failing, within that culture, to be inclusive of people of color and women, and high-profile male directors (and shitty male journalists) are running their damn misogynistic mouths all over the place. And there’s little sign of these things changing. At all. Oh, and we all know how the Oscars are going to turn out on Sunday (hint: white and male as hell).