In space, everyone can hear Neill Blomkamp direct the fifth Alien movie 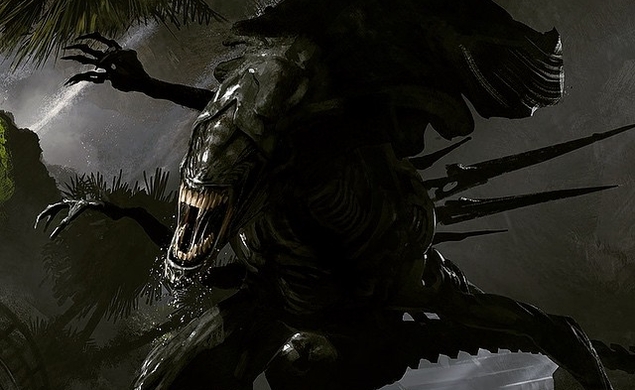 It was not too long ago that director Neill Blomkamp was just another struggling South African-by-way-of-Canada with dreams of sci-fi grandeur and a funny last name. From a journeyman career as a 3-D animator for fantasy programs, Blomkamp took Hollywood by storm with his sleeper-hit political allegory District 9. His follow-up Elysium was many things—loud, heavy-handed, and full of Matt Damon’s shiny bald head—but “a worthy successor to District 9” was not one of them. Hopefully, Blomkamp will save some face with next month’s Chappie, a feature-length Die Antwoord music video about a plucky robot who must defeat Evil Scientist Hugh Jackman (four words that fit together with a beautiful anti-logic).

But even on the eve of his new major release, Blomkamp has already announced his next project. Our beloved Kate Erbland reported last month that Blomkamp was in the process of independently cooking up concept art and production design for an imagined sequel to what is probably the most essential science-fiction film of the blockbuster era, Alien. But in Hollywood, no one can hear you creatively reenergizing a pre-existing property, and the studios appeared to give Blomkamp and his Alien baby the hard pass. Last Wednesday, Blomkamp revealed what anybody familiar with the Alien franchise already knows too well: Even, and most especially, when you think it’s dead, it may still have a little fight left in it. In an interview with Uproxx, Blomkamp said that he would not be deterred, and that he was in the process of finding a studio that could pick up what he was putting down.

Turns out a little persistence and having directed three fair-to-great major motion pictures gets you far in this crazy business called show. 20th Century Fox has now confirmed that a fifth Alien film will burst violently out of Blomkamp’s brain-chest and onto screens a few years down the line. Last night, Blomkamp posted a photo of design art for the iconic Xenomorph on his Instagram account with the caption “Um… so I think it’s officially my next film. #alien.” I generally use my Instagram account for pictures of funny-looking dogs I see around town, but this is cool, too. It’ll be a minute until Blomkamp’s A5ien sees the pure, blinding light of outer space, however. Series progenitor Ridley Scott is currently working on a sequel to Alien prequel Prometheus, to be released in 2016. It’s safe to assume that any fifth Alien would arrive after Prometheus 2: Space Murder Boogaloo.