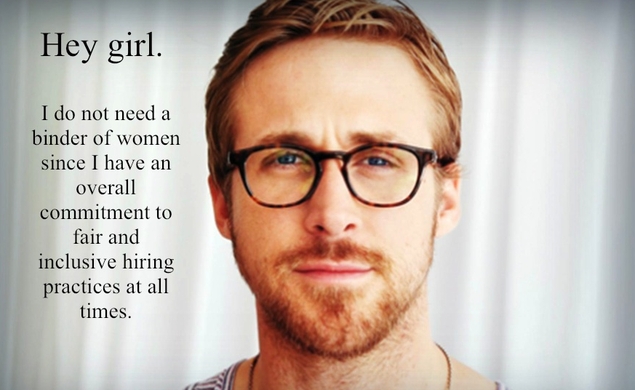 Sign of hope: Projects about, by, and/or starring lots o’ ladies
There are plenty of female-centric movies and projects in theaters, in your home, and/or aiming to be in theaters or your home sometime before we all die. Here are a few:

Harbinger of doom: Fox And Friends and Penny Nance
Earlier this week, Fox and Friends host Steve Doocy opined that Frozen depicts men as “evil and cold and bumblers,” and that this makes the film harmful for young, impressionable children to behold. Penny Nance, the CEO of Concerned Women for America, which I had no idea was a thing, showed up as a talking head to discuss the topic with Doocy. She agreed with his take, stressing that when she takes her daughters to see movies, she wants them to see “real men” and “heroes.” “It’s not just Disney; Hollywood in general has often sent a message that men are superfluous, that they're stupid, that they're in the way,” she said. “And that is not true, and it is not good social science.” HAHAHAHA. HAHAHA. K, I’m done.

Penny, I am now the new CEO of Concerned Women, and I am concerned about you. You’re worried that Hollywood is sidelining… men? That the movie industry is drawing on thin, gender-based stereotypes, misrepresenting men as one-dimensional, useless characters, willfully and consistently ignoring the fact that they’re human beings? That your daughters are growing up in a world where all movies focus on and empower women at the expense of men, and that, as a result, they’ll grow up with a skewed understanding of a man’s potential? That Hollywood doesn’t practice good social science… when it comes to men? Oh, and that there’s a shortage of movies that feature men as heroes? I lied, I’m not done laughing.

Sign of hope: Smart, influential people speaking out about feminism
As usual, there were no shortage of women and evil, cold, bumbling men willing to throw their hats in the feminist ring this week. Here are a few great quotes from around the web:

Harbinger of doom: Amy Pascal’s exit from Sony
We can speculate all we want on why Amy Pascal is leaving Sony, and argue endlessly about whether or not her exit is warranted. But ultimately, Pascal was the highest-ranking female exec in Hollywood, in an industry that has very few women at the top. It probably wasn’t a coincidence that she was the only person publicly penalized for the Sony hack and the subsequent avalanche of bad publicity. And while she wasn’t perfect—see: insensitive, racist emails re: Obama’s film taste, After Earth—throughout her career, she's spoken out about gender imbalance in the industry and worked to champion films made by and starring women. Her departure means that we have one less woman with the power to change the way Hollywood treats its female constituents.

Sign of hope: Ryan Gosling memes?
In totally bizarre but amazing news, Ph.D. students at the University of Saskatchewan, Canada, found that when men looked at Danielle Henderson's Feminist Ryan Gosling memes, their pro-feminist sympathies increased by as much as 10 percent. So, in other words, by looking at photos of Ryan Gosling overlaid with quotes like, “Hey girl. Keep your laws off my body, but keep your hands on it” or “Hey girl. I stood with Wendy Davis, but I’d lie down with you anywhere” made men think, “Hey girl, this feminism thing isn’t so scary after all.”

Why, you ask? “We don’t know what it was about him that they liked so much,” said co-researcher Linzi Williamson. “It could have been they just really admired him or they think he’s a cool dude.” Co-coordinator Sarah Sangster countered, “He’s viewed as sexual competition, so he becomes someone to live up to,” adding, “What our research says is that we shouldn’t quickly dismiss pop culture phenomena, and realize that there is potential to use it as a persuasive device.” You know what? Whatever it takes, dudes.

Harbinger of doom: “It was Bollywood’s fault” as a legal defense
The flip-side of the persuasive mechanisms of pop-culture phenomena: An Indian man accused of stalking women in Australia blamed it on Bollywood. Sandesh Baliga, who’s a 32-year-old security guard (ironic line of work, considering), was accused of stalking two different women, calling them incessantly, texting them, following them, and referring to himself as their boyfriend. When pressed in court, he said he “learned from Bollywood movies that relentlessly pursuing women was the only way to woo them,” that “male leads in Bollywood movies always got the women to say yes by doggedly chasing them.” His lawyer argued that his behavior was “quite normal” for Indian men. Take a deep, enraged breath before I tell you this next part: Court Magistrate Michael Hill accepted the argument and let him go.

Let’s entertain, for a moment, the idea that Baliga’s telling the truth. Maybe he did grow up watching Bollywood movies and taking their word as gospel. Maybe he did really believe that this was the only way a man could get a woman. And honestly, that’s not hard to believe—Bollywood movies are routinely criticized for their rampant misogyny, and even here in America, we’ve got no shortage of movies that paint stalking as sexy, as a means to a romantic end. That’s a problem in and of itself, one that needs examining, one that absolutely contributes to cultural biases, and one that definitely counts as a “harbinger of doom.”

But for an allegedly aggressive stalker to rest his entire legal defense on movie culture—and for a judge to accept that defense—is straight-up horrifying. Even if this man’s exposure to Bollywood misogyny influenced his behavior, that doesn’t excuse it, and it certainly doesn’t render it legal. This is a pitch-perfect example of how insidious misogyny is, how sneaky it is, how it hides and follows you home and calls you all the time and then gets away with less than a slap on its wrist. Yes, it’s everywhere in the movies, and yes, that’s part of why it’s everywhere in real-life, too. But we don’t get anywhere as a society by letting the industry or its consumers get away with shit like this.

Harbinger of doom (again): The reaction to Sundance 2015 awards
The Huffington Post has a breakdown of what awards went to women at Sundance 2015, and does its best to paint it in a positive light. The highlights, according to HuffPo: 36 percent of the competition films were directed by women, and about one in three awards went to those films. Winners included Crystal Moselle’s The Wolfpack (U.S. Grand Jury Documentary), Kim Longinotto from Dreamcatcher (World Cinema Documentary Directing Award), and Frida Barkers’s Pervert Park (both The World Cinema Documentary Special Jury Award for Impact and for Unparalleled Access). But female nominees were almost entirely missing from the Next category, as contestants, and they made up only one third of the awardees in most categories.

Yes, these stats are better than, say, the Oscars (and, as HuffPo points out, the U.S. Congress, which is less than 20 percent female), but they’re still not great. One-third of the pie isn’t groundbreaking—it’s just a slow, plodding step in the right direction. This isn’t bad news, necessarily, but we shouldn’t be celebrating yet, and the fact that these numbers are being lauded as proof of gender equality progress is a little depressing. Let’s reach higher, y’all!

Overall, was this a good, bad, or neutral week for women in movies, Rachel?
Bad. Why does it feel like the entire world is in denial, except for our Signs Of Hope? In one corner of the world, we’ve got men watching misogynistic movies, behaving terribly, blaming it on said movies, and walking away scot-free; in another, we’ve got (admittedly ridiculous) TV anchors bemoaning misrepresentation of men in a kids’ movie, a high-ranking female exec taking the fall for a gigantic company’s mistakes, and media celebrating the fact that women were one-third as recognized as men at a major film festival (oh, and roundly dismissing the accomplishments of an Australian writer—see below). At least we’ve got our Ryan Gosling memes to see us through.