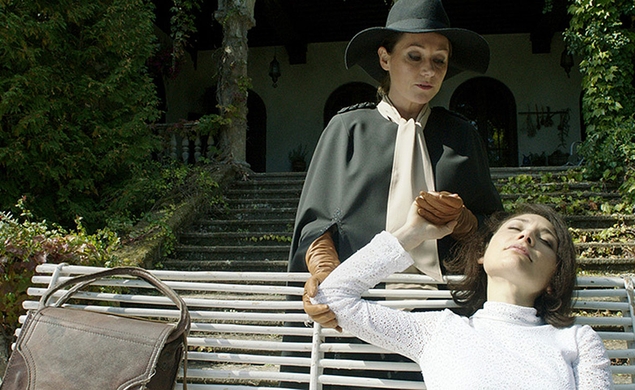 Sign of hope: Movies about, by, and/or starring lots o’ ladies
There are plenty of female-centric movies in theaters, in your home, and/or aiming to be in theaters or your home sometime before we all die. Here are a few:

Harbinger of doom: Dianne Wiest’s New York Times interview
Dianne Wiest and Tonya Pinkins recently spoke to The New York Times to promote their new play, Rasheeda Speaking, a dark comedy about racism, and they both talked about instances in their respective careers where they’ve felt marginalized. Alexis Soloski writes, “In their work on the play, both women can draw on decades of experience in the entertainment industry where they have often felt limited — if not precisely discriminated against—by appearance and type, with race being only one factor. After her early work with Woody Allen (which resulted in Oscars for Hannah And Her Sisters and Bullets Over Broadway), Ms. Wiest said that she felt she was typed as ‘a nice mom and that’s it. That’s all that ever came, except in theater.’ She also described instances of being silenced or ignored while male colleagues were praised for speaking their minds.” Wiest also admits she’s found it difficult to find enough work to pay her rent, saying, “I have to move out of my apartment soon.”

Wiest’s story isn’t unique, and it certainly isn’t as harrowing as the stories of non-famous women across America who can’t pay their rent. But it’s a microcosm of a much larger problem, and a story that matches up with those of many actresses over 40, who worry—rightly so—that they’ve aged out of most available parts that aren’t “nice moms.” It reminds me of a disturbing passage in Charles Bramesco’s wonderful Anita Ekberg’s obituary: “But as her dizzying beauty began to fade, so too did Ekberg’s life gradually fall to shambles. She virtually disappeared from the film world over the course of the ’70s, but took a much harder hit in 2011. While she convalesced from the broken hip mentioned above, robbers ransacked the actress’ home and set her villa aflame, leaving her nearly penniless. She was forced to turn to the Fellini Foundation of Rimini for financial assistance, but remained destitute until her death.”

It’s not unfair to partially blame our culture’s problem with aging women on Hollywood’s problem with aging women. (Also, Hollywood can absolutely handle that blame, so don’t feel bad about yelling at it.) If there’s anything hopeful here, it's that we seem to be hearing more stories like this—meaning the media is taking notice, and women are more emboldened to speak out.

Sign of hope: Sundance
If the Oscar nominations disappointed you with their white-washed men-washing, feel comforted by what’s happening at Sundance. It’s not a coincidence that the indie film fest is more inclusive of voices that are usually left out of the conversation—after all, indie does stand for “indignant,” which all of the people who have been systematically ignored most definitely are. This year’s fest has already seen an onslaught of work by and starring women and people of color. To name a few: The Hunting Ground, a look at rape culture on college campuses; the Nina Simone doc What Happened, Miss Simone?; The Bronze, written by and starring Melissa Rauch; the critically acclaimed horror film The Witch, centered on a woman in 17th-century New England; Diary Of A Teenage Girl, about a teen’s coming of age in 1970s San Francisco; and Sleeping With Other People, another edgy comedy from Bachelorette’s Leslye Headland.

Behind the screens, Women in Film awarded more than $33,000 in grants to filmmakers, and several smart-as-fuck ladies gathered to share their takes on women and the film industry. Emily Nussbaum moderated a panel that included Lena Dunham, Mindy Kaling, Jenji Kohan, and Kristen Wiig. (Watch the whole thing here, it’s fantastic). Some standout quotes:

Harbinger of doom: Twitter’s response to the Ghostbusters cast
While we were over here celebrating the all-female Ghostbusters cast, the terrible people of the Internet were over there, shitting all over it. A fair amount of vitriol was spewed regarding the casting news, including, but not limited to: mocking McCarthy’s weight, gender, and unfunniness; calling the film “period busters”; deeming the leads unfuckable; and claiming that Feig was destroying the original film’s legacy—oh, and everyone’s childhoods—by retelling the story with women.

Here are a few fun round-ups with actual examples. Here’s an actual quote from Ernie Hudson (from the original Ghostbusters), which is particularly egregious: “I love females. I hope that if they go that way at least they’ll be funny, and if they’re not funny at least hopefully it’ll be sexy. I love the idea of including women, I think that’s great. But all-female I think would be a bad idea. I don’t think the fans want to see that.” And here’s an awesome tweet from Saladin Ahmed that nicely sums up the problematic response. We’ve come so far, guys, but also, not far at all.

Sign of hope: Celebrities speaking out
Meanwhile, back in the land of the (relatively) civil, several celebs stepped forward and voiced their support for feminism and their opinions on gender bias; rallied for more female stories; spoke out about stereotyping; and called out the industry for its sexism. Here are some select quotes:

Harbinger of doom: Regressive bullshit
Elsewhere, other public personalities put their feet directly into their mouths.

Speaking about Knock Knock's premise, Roth says, “I think it’s very much a feminist film. I think women are gonna love it… I liked these [female] characters that, something terrible has happened to them, and they believe that all men are the same, and this is just fucking bullshit.” Okay, we’re treading on some weird ground here, but nothing outrageous so far. He goes on to explain the central conflict as follows: “[Keanu Reeves’ character] is a man that’s been castrated in a strange way and emasculated, and instead of confronting his wife and going, ‘You know what? This is fucked up. You guys should be staying here with me,’ he doesn’t. He takes it in and buries it. And then these other girls come out and they go, ‘Hey, you are hot’… They’re just tantalizing him. And he goes, ‘Yeah, you know what? I’m a man. I am a man. I’m not just here like the dad. I’m a man. I’m a sexual being, and that’s OK. My wife doesn’t want to have sex with me. My kids were making fun of me. I’m gonna do this. There’s nothing wrong with that.’ ”

Listen, Roth is purposefully debate-bating (did I just make that term up? I'm okay with that), and he’s not necessarily saying he agrees with Reeves’ character’s logic. I’m fine with a movie that allows for moral ambiguity and plays with notions of gender roles; I’m more than fine with an awesome horror movie, which I hope Knock Knock will be. It's hard to speak on how feminist the film itself is without seeing it, but in the meantime, I’m not fine with Roth, a prolific director with a boatload of male fans, conflating a lack of total control over a woman with “emasculation,” or conflating “manhood” with “having sex.” This is lazy, regressive, and reductive.

I’m also not cool with this little exchange: “Buzzfeed: But the cheating is so contentious. I mean, they’re really pushing him. He’s telling them to stop. ER: Well, he does it, though. We talked about that. If you notice, Evan’s mouth says no, but his feet say yes…’” Dammit, Roth. We’ve been working against the “no means yes” defense for years. Can you not say stupid shit like this that hinders progress and re-enforces rape culture? Thanks.

Overall, was this a good, bad, or neutral week for women in movies, Rachel?
Bad. Sure, public figures spoke out on industry-wide sexism, but that doesn’t mean it’s been eliminated. Ghostbusters’ all-female cast was announced to the sound of thousands of sexist humans wailing; aging women are being ignored in Hollywood; and other public figures are proudly espousing regressive, sexist tropes with very little blowback. This week was disheartening, Hollywood. Let’s do better next week.