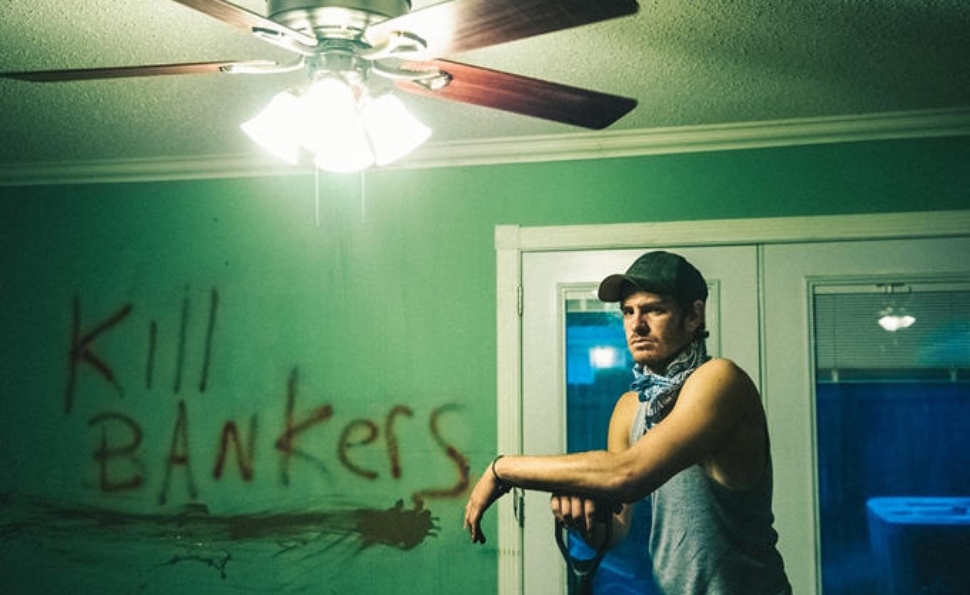 Few filmmakers have gotten off to the roaring start that Ramin Bahrani’s did with his first three films—Man Push Cart, Chop Shop, and Goodbye Solo—all of which tell small, riveting stories of people at the end of their ropes, pushed by economic inequity to at least consider taking desperate action. But Bahrani veered way off track with 2013’s At Any Price: a more lavish, star-driven melodrama about a well-off farmer whose seed business leads him to compromise both his morals and his neighbors’ financial security. As Bahrani shifted from empathizing with individuals to indicting broken social institutions, he hobbled himself as a dramatist. At Any Price frequently stops cold so that characters can exchange stilted dialogue meant serve as position papers on the woeful state of American farming.

The good news about Bahrani’s new 99 Homes is that it has far more life in it than the at-times-laughably stiff At Any Price. Credit two outstanding lead performances: by Andrew Garfield as Florida construction worker Dennis Nash, who gets evicted from his family home with his mom (played by Laura Dern) and son when they miss a few mortgage payments; and by Michael Shannon, who plays Rick Carver, a realtor who profits from (and thus encourages, sometimes illegally) homeowners who go into default. When Dennis confronts Rick, the realtor hires Dennis to help him with his evictions, teaching him the ropes of a business that’s become all about defrauding government programs instead of putting people into houses. The two actors play off each other well, but as Dennis learns all he needs to know from Rick, and has to decide how far he’s willing to go to be successful, 99 Homes ceases to be a story about a person and instead becomes an illustration of an ethical dilemma. But at least it’s a punchy one. If Bahrani feels obliged to keep turning outraged op-eds into movies, at least he can do audiences the favor of hiring actors like Shannon, who can deliver “it sucks but here’s the way things are” speeches in ways that sound like actual movie dialogue.

Andrew Niccol’s Good Kill has its own Michael Shannon, in the form of Bruce Greenwood, who plays the commander of a squadron of Army drone pilots outside Las Vegas, and spends nearly every minute of his screen time talking rapidly and at length about how drone warfare is ignoble and dehumanizing, yet essential to keeping terrorism in check. Unfortunately, Greenwood doesn’t have a character as sympathetic as Garfield’s in 99 Homes to bounce his “survival of the fittest” patter off. The star of Good Kill is Ethan Hawke, who plays gruff, monotone, booze-befogged drone pilot Thomas Egan. Good Kill shows Thomas traveling numbly from his deteriorating marriage to his job behind a joystick, where every day the U.S. government (represented, inevitably, by the voice of Peter Coyote) orders him to commit what would’ve been considered heinous war crimes not so long ago. And that’s the movie. There’s no plot, only a repetitive depiction of an impossible situation. The footage of drones bombing terrorist cels (and non-combatants) is undeniably fascinating, but it would’ve been far more effective if Niccol had put all of his copious research about the drone program into an actual story.

Then again, it’s difficult to make a movie with a political conscience that doesn’t come across as preachy, dry, or both. Jon Stewart, who knows a lot about making political engagement entertaining (via his The Daily Show) does his damnedest to make sure that his directorial debut Rosewater has some pop, and doesn’t bore the audience; but even Stewart has his limits. Not that there’s anything especially wrong with Rosewater. Based on Maziar Bahari’s memoir Then They Came For Me, the film stars Gael Garcia Bernal as Bahari, an Iranian born international news reporter who returned to his home country in 2009 to cover the presidential election for Newsweek, and then spent over 100 days in prison, accused of being an American spy—in part because of a segment he did on The Daily Show. Stewart recreates that segment in Rosewater (with Jason Jones playing himself), and Bernal maintains a certain joviality throughout the film that makes a grim story of psychological torture highly watchable. Outside of the integration of actual news footage and documentary footage from Iran though, Rosewater never develops into anything unexpected or special. Bahari’s story is one people should hear, and Stewart tells it just fine (with a lot of help from Bernal), but the movie seems to hold back from making audiences uncomfortable, and without that harshness it’s just a recounting of events, not a you-are-there experience.

Joshua Oppenheimer’s documentary The Look Of Silence, on the other hand, is an experience and a half. Oppenheimer’s The Act Of Killing had a grabby conceit, with Oppenheimer helping some of the perpetrators of genocide in Indonesia to recreate their crimes, in hopes of getting them to confront what they actually did. In the companion film The Look Of Silence, Oppenheimer revisits some of those aged killers, bringing with him an optician friend, Adi, whose brother Ramli was famously and publicly murdered during the purge. As these men boast once again about who, how, and why they killed, Adi stares calmly at them, asking questions that challenge their accounts and shake their confidence. These encounters are the engine that drives The Look Of Silence, generating enough nervous tension to compensate for the film’s lack of big, stagey Act Of Killing-like set-pieces.

What makes The Look Of Silence as great a film as The Act Of Killing—if not better—is that it’s shot through with a mix of hope and despair that leaves its ultimate point more ambiguous. Throughout the movie, Oppenheimer cuts in footage of Adi’s centenarian father, who’s blind and deaf and barely able to move, and who is largely unconcerned with the devastating losses in his past. What is the old man meant to represent? Is he standing for the brutalized, terrorized survivors of the genocide? Or does he merely show that time marches on and devastates the powerful and the powerless alike? The Look Of Silence is mainly about Adi’s search for satisfaction after decades of living alongside his brother’s assassins. But again and again, any sense of justice remains elusive for Adi, because the people he’s grilling are mostly frail old men like his father, not terrifying thugs getting their belated comeuppance. The Look Of Silence is able to hold these multiple ideas and perspectives at once—without even a Michael Shannon or Bruce Greenwood to explain them.

Also seen: Director Cédric Jimenez’s The Connection—known as La French in France—suffers in comparison to its American forerunner The French Connection, which is a more contained, more atmospheric story about cops fighting the transatlantic heroin trade. But while The Connection’s decade-spanning story of a dogged magistrate (played by Jean Dujardin) and an equally determined mob boss (Gilles Lellouche) is too diffuse to have much more than a fleeting impact, the movie does make for a fascinating study of two men who keep waging the same war year after year, even as the culture changes around them.

Bent Hamer’s 1001 Grams, meanwhile, is a thoroughly predictable example of an old arthouse staple: the gentle dramedy about a fussy person with a quirky job whose entire life is upended. In 1001 Grams, the fussy person is an employee of Norway’s Bureau Of Weights And Measures, who has her ordered existence thrown into disarray when her father dies, right around the same time that she’s attending her first international conference. All the detail about what goes on at the bureau is unusual and entertaining, but nobody in 1001 Grams ever feels like anything other than a movie character, awaiting the right moment to be harmlessly eccentric.

Finally, my biggest regret of this year’s TIFF isn’t all the movies I missed (either because Scott or Mike saw them or because I just couldn’t fit them into the schedule), but the one movie I dozed off during. That movie is The Editor, a giallo parody that’s part of this year’s Midnight Madness program. This has been an especially weak year for the midnights (including Kevin Smith’s well-meaning but under-baked oddity Tusk, which will get a full Dissolve review next week), but what I saw of The Editor looked funny and stylish, telling the story of a one-handed Italian movie editor who’s accused of systematically murdering his cast and fellow crew. The gags were well-timed and the style suitably giallo-esque, but after about 20 minutes I zoned out, and then after 30 I was completely conked. I’ll look forward to seeing the rest of the film when and if it gets distributed.