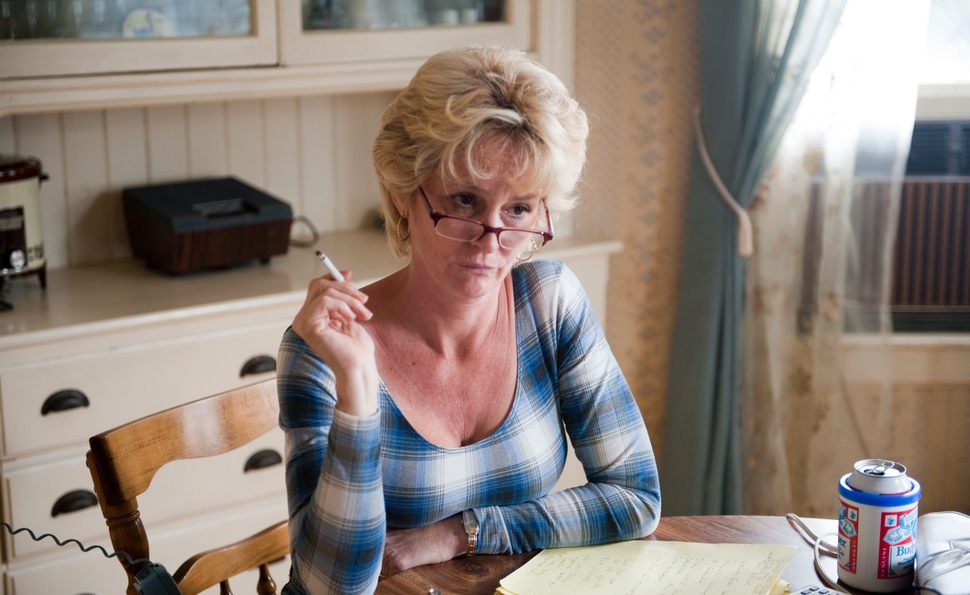 The 2010 Supporting Actress race confused “best” and “most”

Melissa Leo is a great actor, as anyone who’s seen Homicide: Life On The Street or 21 Grams knows. She might even be terrific in Frozen River—I can’t say for sure, since I bailed on that film after 40 minutes at Sundance 2008, annoyed by its ham-handed bluntness. As ferocious, loyal mom Alice Ward in The Fighter, however, she gives one of those aggressively vulgar performances that Oscar voters, prone to confusing “best” with “most,” seemingly can’t resist. She throws frying pans at people. She yells half of her dialogue, like the rest of the cast. She murders a Boston accent. It’s a three-ring circus of working-class tawdriness, and while that sort of thing can be expertly done—Amy Ryan pulled it off a few years earlier in Gone Baby Gone—Leo, who grew up in Manhattan and the Hamptons, can’t entirely make it convincing. Part of the problem may be that this is the film where David O. Russell began using what is now his standard technique, which is reportedly to create chaos on the set and give his cast as much leeway as possible, hoping for spontaneity. (There’s some of that in I Heart Huckabees, too, but he still seemed in control back then, shaping performances to a specific vision rather than the other way around.) On the rare occasions when Alice is alone with one of her sons, rather than presiding over a gaggle of cartoonishly crass daughters, Leo can be affecting, but I’m reminded of Cary Grant’s line in Bringing Up Baby: “Now it isn’t that I don’t like you, Susan, because after all, in moments of quiet I’m strangely drawn toward you. But—well, there haven’t been any quiet moments.” This is a classic case of greasing the squeakiest wheel, and it’ll be doubly depressing when some future, more subtly powerful Leo performance winds up being completely ignored. 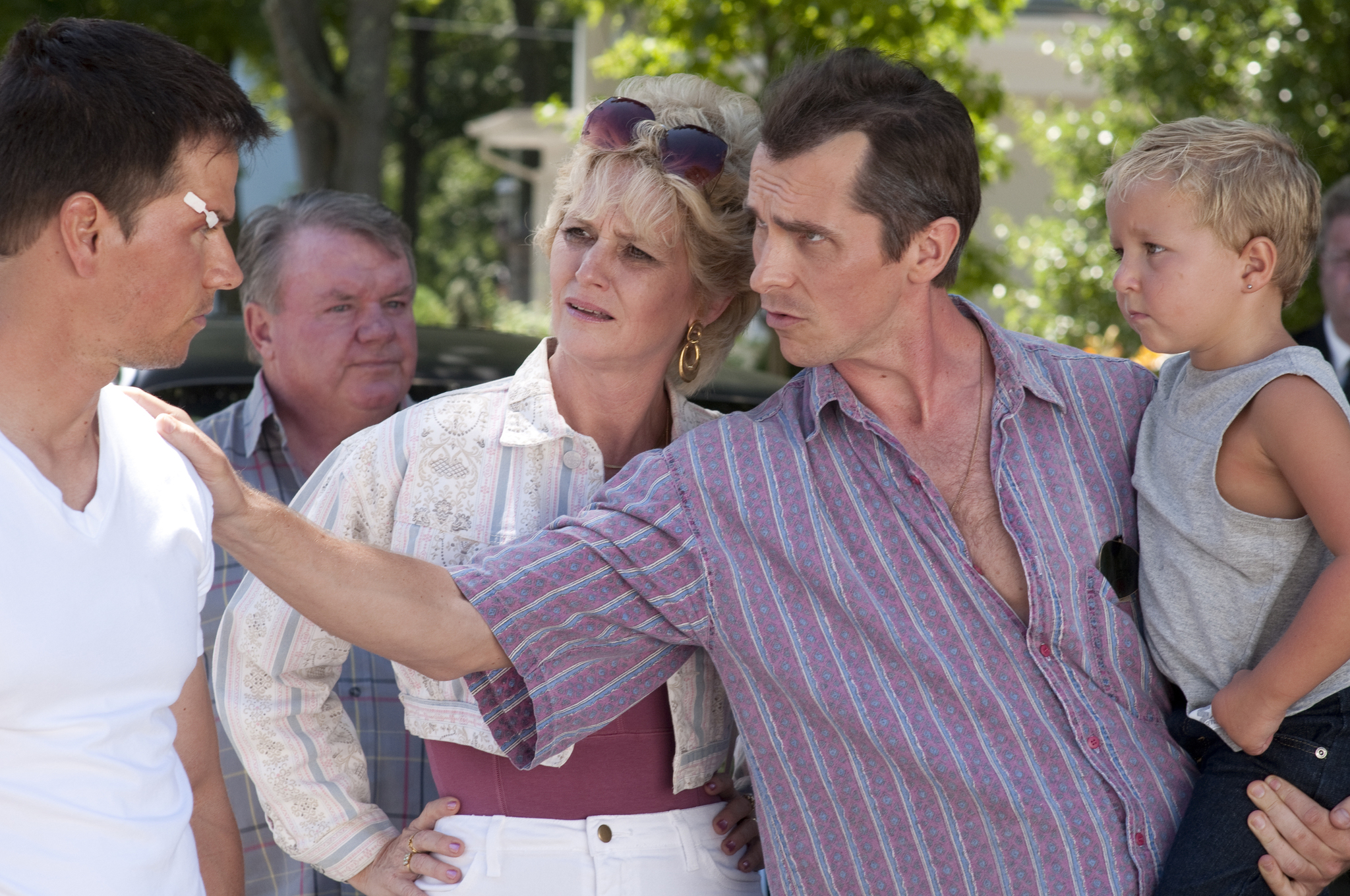 As much as I’d like to blame the NYFCC for validating Leo in AMPAS’ eyes, I’m pretty sure she would have won the Oscar even without any support from the major critics’ groups. (Indeed, the influence has swung in the other direction, with the NYFCC now seemingly trying to anticipate Oscar winners. I say that as a former member; the shift was evident during the eight years that I voted.) At least they didn’t give the award to Hailee Steinfeld in True Grit, however. That isn’t a knock on Steinfeld’s performance, by any means—of all the women I’m discussing in this installment, she did by far the most impressive work, giving Mattie Ross a fierce determination that was sorely lacking in Kim Darby’s interpretation of the character in the 1969 John Wayne version. But the idea that she’s a supporting actress in that film is flat-out laughable. Mattie is in almost every scene, driving the action from start to finish; it’s her story, and everybody else, including Rooster Cogburn (for which role Jeff Bridges received a Best Actor nomination), is supporting her. Arguably, receiving recognition in the wrong category is preferable to being overlooked, and Steinfeld herself might well feel that way. All the same, I bridle whenever AMPAS voters (abetted by publicists and marketers) pull this stunt. The most ludicrous example remains Ethan Hawke’s Supporting Actor nomination for Training Day, but this one comes pretty close; in a weird way, I’m glad she didn’t actually win, despite outclassing the competition, just because it would look so dumb in future histories of movie awards. Imagine learning that, say, Sissy Spacek swept the Best Supporting Actress prizes for Carrie. There would be nothing to do but gape in befuddlement. 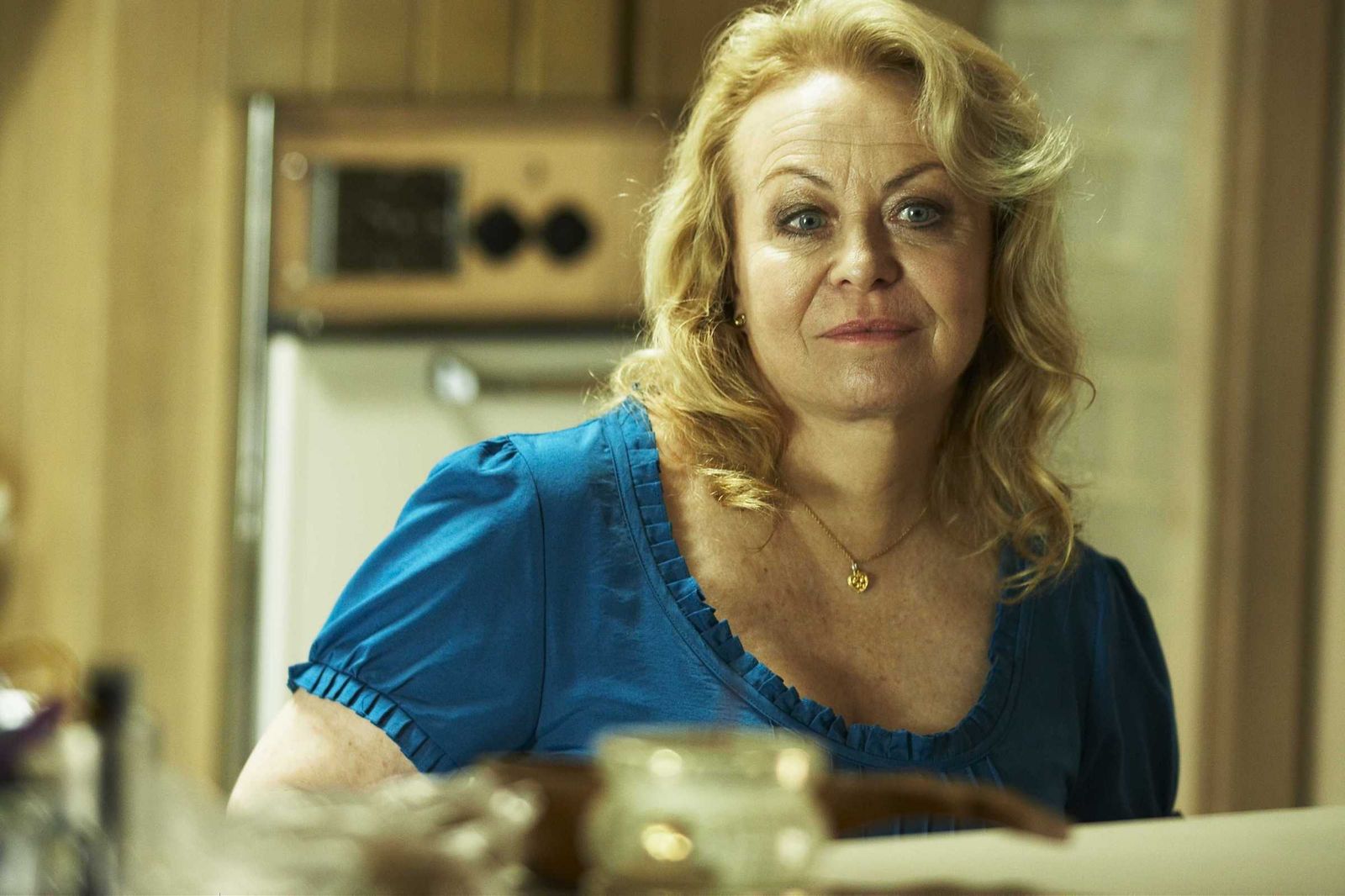 This performance scares me. In many ways, it’s similar to Leo’s—both play brash, tough older women prepared to do anything to protect their families—but Weaver isn’t attempting to completely reinvent herself onscreen, and that leaves her free to channel all of her energy into making her character, who’s improbably called “Smurf,” as creepy as possible. Maybe it’s just my preference for steeliness over shouting, though, so forget the direct comparison. What’s impressive is the way Weaver seems to have an internal equalizer with two knobs—one marked Menace and one marked Endearment—and the way she succeeds in keeping them tuned at exactly the same level throughout the film. I resisted the performance at the time, I confess—partly because I didn’t much like the film, partly because what Weaver does seemed to me only slightly removed from the foul-mouthed grannies who populate terrible comedies. It’s easy to provoke a reaction by giving harmless-looking individuals (see also: small children) something shocking to do. Watching it again, though, I have to admit I was wrong. There’s no fakeout involved here, no simplistic disparity between appearance and behavior. Smurf is just a ruthless person, and it’s not at all hard to imagine a younger incarnation of the character cutting just as frightening a figure, right down to calling everyone “sweetie.” Also, it’s rare for an actor who’s almost completely unknown in the U.S.—Weaver’s career goes all the way back to Picnic At Hanging Rock, but she worked mostly in Australian theater until Animal Kingdom jump-started her career—to get this degree of attention and acclaim. Anyone who manages it has to have done something remarkable, and I ought to have recognized that. 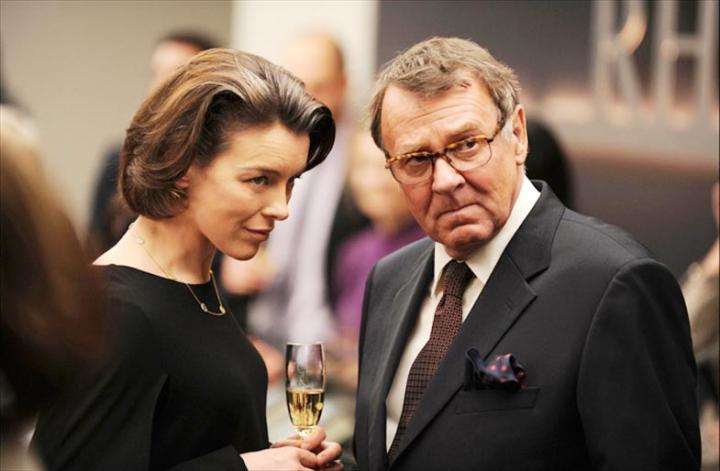 I’m standing firm on my “Whaaaaaat?” for this award, though. I like Olivia Williams, I like The Ghost Writer, I like Olivia Williams in The Ghost Writer just fine—she does what’s required of her, which is mostly just to be brusquely professional with a side of tenderly wounded. This isn’t really an actor-driven movie, however, and Williams isn’t given enough to do to make it plausible for her to register as anybody’s single favorite supporting-female performance of the year. My best guess is that people responded to a climactic revelation regarding her character, Ruth Lang, the wife of a Tony Blair-like prime minister. This late-breaking twist, which reveals how many strings Ruth has been pulling (I should probably say no more), unquestionably puts a new spin on viewers’ perception of her; thing is, though, the very nature of said revelation precludes its factoring into the performance.

Hmm, I didn’t realize how hard it would be to address this without venturing into major spoiler territory. Suffice it to say that I watched The Ghost Writer a second time, after the NSFC (as well as a group of cinephiles I poll annually) gave her their Supporting Actress prize, paying close attention to Williams, and still could not figure out what the big deal is supposed to be. To my mind, it’s like handing a trophy for Best Bass Guitar to Adam Clayton for “With Or Without You”—the song wouldn’t work without him, but that doesn’t mean he’s doing anything extraordinary. Any number of actors could have played Ruth, and they all would have been about equally solid, I reckon. Compare this performance to her work in Rushmore, or to any episode of Dollhouse, and the difference is stark. 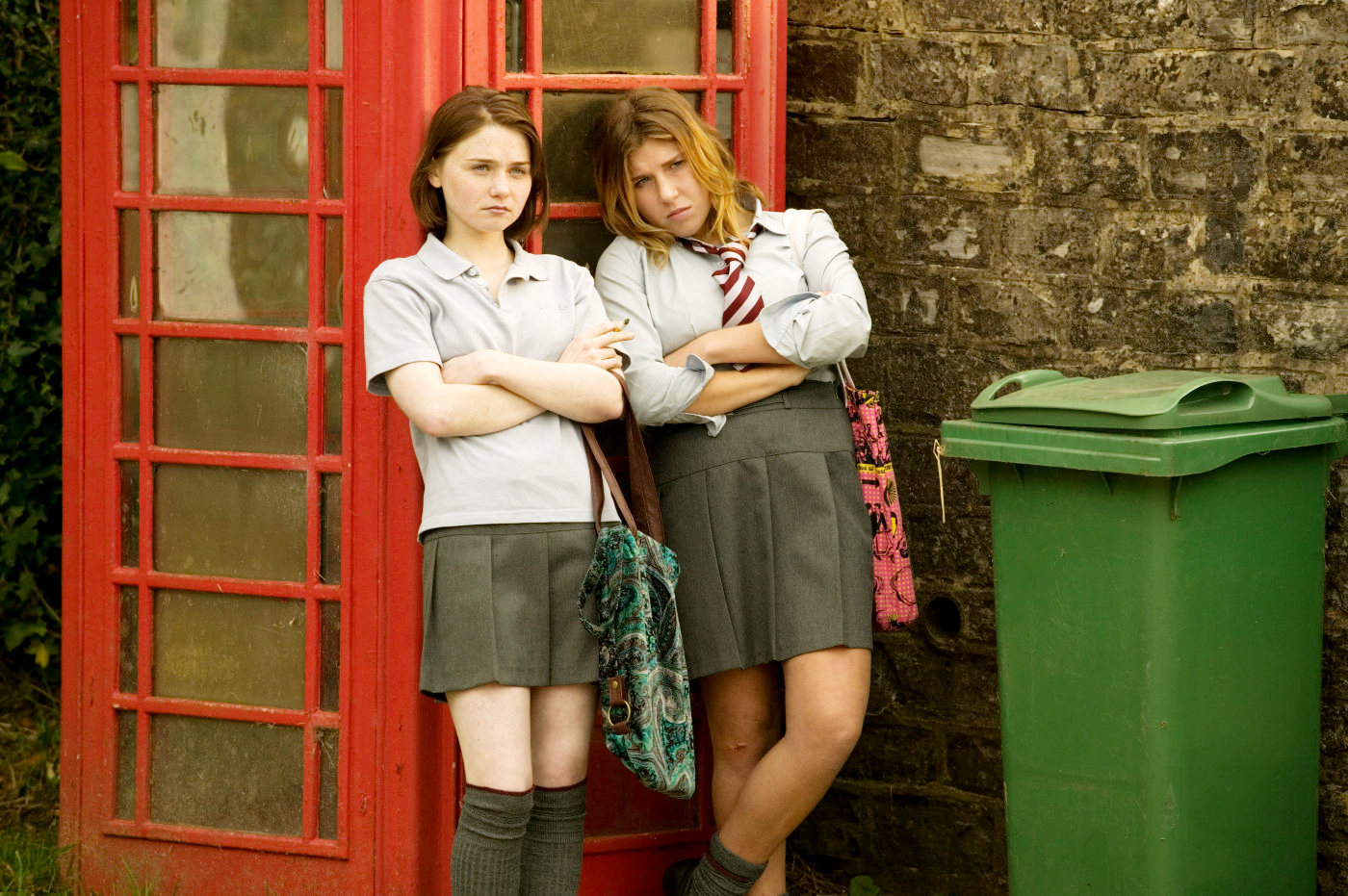 Admit it: You forgot this film existed, assuming you’d ever heard of it in the first place. It’s a charming bit of fluff, directed by Stephen Frears and adapted from a comic strip in an English newspaper; I had a good time, but I wouldn’t urge anyone to go out of their way to see it. However, I’m surprised that in the four years since its Cannes première (out of Competition), we haven’t heard more from Jessica Barden, who was 17 at the time, and steals this sprawling ensemble piece in scene after scene. Her character, Jody, is a rural teenager obsessed with a rock star (Dominic Cooper), and saying she’s excitable would be like saying John Goodman is hefty. Barden throws herself into this relatively small role with reckless abandon, perfectly capturing the solipsistic worldview of a teen with a celebrity crush; it’s as if a million tweets from Justin Bieber fans have collectively taken human form. What’s truly amazing is that Jody comes across more adorable than insufferable, in spite of her inability to think of anything but her inappropriate object of desire. It’s a performance in the best tradition of British comedy, with its emphasis on gentle ridicule, and Barden is so vivaciously singleminded that I was sure I’d just seen a future star in nascent form. Apart from a part as the protagonist’s best friend in Hanna, however, she hasn’t managed to land any other prominent film roles, though the IMDB does put her in forthcoming films from Thomas Vinterberg and Dogtooth director Yorgos Lanthimos. There’s a lot of marvelous energy here to be channeled, should somebody find her another suitable firebrand role.