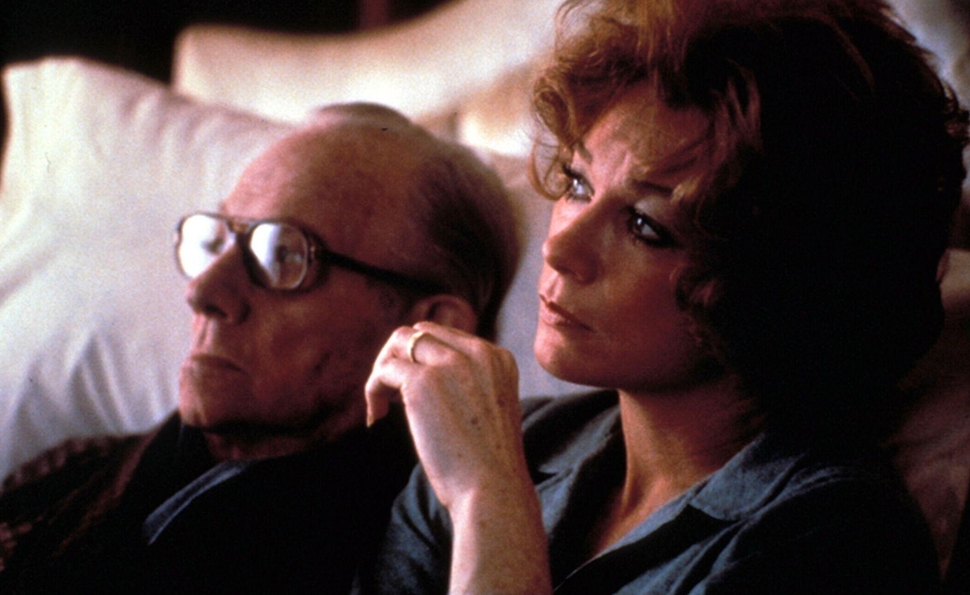 The 1979 Best Supporting Actor race was all about veterans

• Academy Award: Melvyn Douglas, Being There

Two major stars of the 1930s battled it out for the Oscar in 1979, with Mickey Rooney’s crusty but heartwarming performance as a retired jockey in The Black Stallion ultimately losing out to Melvyn Douglas’ crusty but heartwarming performance as a dying millionaire in Being There. Douglas pretty much swept the awards circuit that year, actually, which would make more sense had Rooney not been in the ideal position to siphon off votes: Douglas had already won an Oscar in this category (for Hud, 16 years earlier), while Rooney had only received a special, non-competitive juvenile award way back in 1938, given jointly to him and Deanna Durbin. So AMPAS members and critics must genuinely have believed that Douglas did the best work—either that, or they conflated the character’s frailty with the actor’s. (He died about a year and a half later at age 80, whereas Rooney made it to April 2014.) I’m inclined to the latter possibility, mostly because Being There, by its nature, doesn’t really allow any of its actors to do much more than riff on a single idea for the duration of the film. Douglas’ Ben Rand never has the slightest doubt about Chance the gardener (Peter Sellers), treating his every simpleminded utterance as a sign of great wisdom; it’s a fun performance, but one that hits the same gruffly avuncular note in scene after scene, until Ben finally expires. All in all, Rooney was more deserving, but perhaps The Black Stallion, which was perceived as a children’s film, just didn’t have enough cachet.

All but one of the major critics’ organizations also gave their award to Melvyn Douglas, so in the repeat slots, I’ll take a look at a couple of the other Oscar nominees that year. To my surprise, the Academy did honor what was arguably 1979’s most iconic performance: Robert Duvall as Col. Kilgore in Apocalypse Now. Kilgore only appears in one extended sequence—about 20 minutes of a two-and-a-half-hour film—so I would have guessed, before checking, that Duvall’s work was ignored, if only because his presence in the film straddles the line between “supporting actor” and “star cameo.” Apparently, though, it was just too vivid for AMPAS to overlook. This, too, is a one-note role, but it’s such a singular, startling note that it scarcely matters. Kilgore doesn’t wear out his welcome, since he’s gone almost as soon as he arrives, having accomplished all his goals: clear the treeline, strafe the village, watch the boys surf.

As Kilgore, Duvall acts primarily with his torso and his throat, keeping the former ramrod-straight at all times (even when he squats down for his famous “I love the smell of napalm” speech) and the latter almost surreally deep and hoarse. It’s a mesmerizing portrait of insane certitude, and Duvall’s finest moment arrives in his delivery of Kilgore’s cryptic final line: “Someday this war’s gonna end.” He refuses to put any sort of spin on it, just flatly making the statement and nodding to himself as if acknowledging that no rebuttal is possible, then walking away; it takes a truly great actor to recognize when to leave a line of dialogue uninflected, allowing each individual viewer to interpret its meaning without assistance. 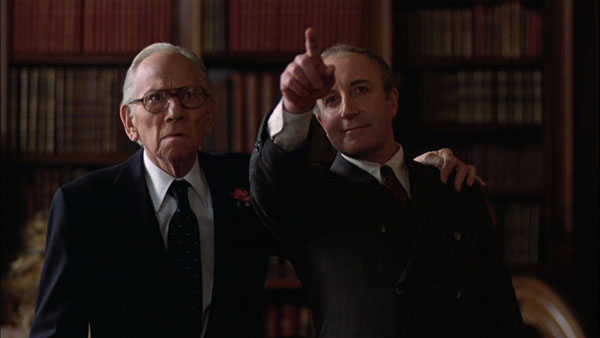 • Los Angeles Film Critics Association: Melvyn Douglas, Being There and The Seduction Of Joe Tynan

I’ve never seen The Seduction Of Joe Tynan, in which Douglas plays one of Alan Alda’s fellow U.S. senators, and Netflix doesn’t carry the DVD. (Other, uh, channels didn’t work out either.) Plus, watching it didn’t really seem cost-effective, since LAFCA most likely just felt like tacking Douglas’ other performance that year onto its award for his work in Being There. Besides, I’d rather use this space to commend AMPAS—something I rarely do—for its perspicacity when it comes to child actors.

Justin Henry was only 8 years old when he was nominated for playing Billy Kramer in Kramer Vs. Kramer, and he’s still the youngest nominee in Oscar history, more than 30 years later. Henry comes across in the film like a real, unaffected little boy, especially in scenes that require him to act out to challenge his newly single dad, played by Dustin Hoffman, who won Best Actor. It’s one thing to tell a little kid on a movie set that he should get up and retrieve the chocolate-chip ice cream and take a big bite, even though his movie father is telling him he’d better not—plenty of boys could do that. Henry makes this hilarious stand-off come alive by constantly glancing at Hoffman  to see how he’s responding, making it clear that he wants to test his boundaries even more than he wants the ice cream. Also, I’ve never been able to get through the scene where Billy gets stitches (after falling on the playground) without tears, in large part because Henry simulates pain and fear so expertly. Child actors rarely go on to adult careers, so it’s hardly surprising that Henry didn’t get many other jobs (his only other notable role is as Molly Ringwald’s smart-ass brother in Sixteen Candles), but I still feel like the industry may have failed him. Few 8-year-olds could have made Kramer Vs. Kramer work as well as it does.

As is so often the case, the NSFC went its own way, giving its prize to Frederic Forrest for two distinct performances in two radically different films. Though he’s remembered today primarily for playing Chef in Apocalypse Now, his Oscar nomination that year was for the Bette Midler vehicle The Rose, in which he plays the title character’s limo-driver-turned-boyfriend. Forrest plays the calmer, more stable role in this particular relationship, allowing Bette Midler to chew the scenery; his Huston Dyer is an ordinary man who falls for a volatile talent and gradually comes to realize that she’s incapable of being the woman he needs her to be. It’s an assured, remarkably subtle performance, and a million miles away from his largely manic turn as Chef, whose mid-film encounter with a “FUCKIN’ TIGER!!!” is only the most explosive example of his jitteriness.

As a member of the New York Film Critics Circle, I generally said “no” whenever someone asked whether, in addition to a category’s winner, we should cite an additional performance we hadn’t actually voted for—most of the time, it just seems unnecessary. In this case, though, I think the NSFC did well to include both The Rose and Apocalypse Now, as together, they make a strong case for Forrest’s range, which tends to be overlooked simply because he’s so memorable when he goes over the top. Watching the two performances back to back, it’s remarkable that they were given by the same actor (though Francis Ford Coppola’s extended production schedule for Apocalypse Now means they were likely shot several years apart). For some reason, though, Forrest was subsequently offered few roles in the Huston Dyer vein, instead becoming a go-to guy for films requiring a quick shot of adrenaline. He retired in 2006, at the relatively young age of 71; perhaps he was just weary, and it’s hard to blame him.

This is admittedly a bit of a cheat. Still, I’ve always maintained that ensemble films have no true lead performances, and if there is one in Life Of Brian, it’s clearly given by Graham Chapman, who plays the title role and only a couple of other minor characters. More than that, though, I just feel as if the Pythons tend to get shafted as actors in their own films—they did consistently amazing work, and were celebrated only as a collective. (This is a general problem when it comes to comedy teams. Nobody ever singles out, say, Chico Marx or Moe Howard for acting honors.) Eric Idle gives perhaps my favorite single-scene performance in Brian, as the bazaar merchant who insists his customers haggle with him rather than agreeing to his first stated price. But it’s Cleese who truly stands out in this picture, playing multiple rigid authority figures, and managing to invest each one with a unique style of belligerence. Reg, the leader of the People’s Front Of Judea, tends to sputter with indignation, especially when dealing with Idle’s Stan, who wants to be called Loretta. (“I’m not oppressing you, Stan—you haven’t got a womb! Where’s the fetus going to gestate? You gonna keep it in a box?!”) The centurion who corrects Brian’s anti-Roman graffiti offers Cleese an opportunity for some of his finest aggressive pedantry. He’s magnificently officious as the high priest in charge of the stoning, who treats the overly eager executioners (mostly women disguised as men, played by men disguised as women) like grade-school children. And he gets the best line among the crowd of cretins who decide Brian is the messiah, responding to Brian’s angry “Fuck off!” with the sincere query, “How shall we fuck off, O Lord?” One could probably make a case for Idle or Michael Palin or Terry Jones as well, but Cleese has always seemed like the heart and soul of this particular Python effort, which is primarily an attack on credulousness, and seems to fall squarely in the Cleese-Chapman zone of twisted logic. Just because he wrote these roles for himself doesn’t mean he doesn’t do a brilliant job of interpreting them.