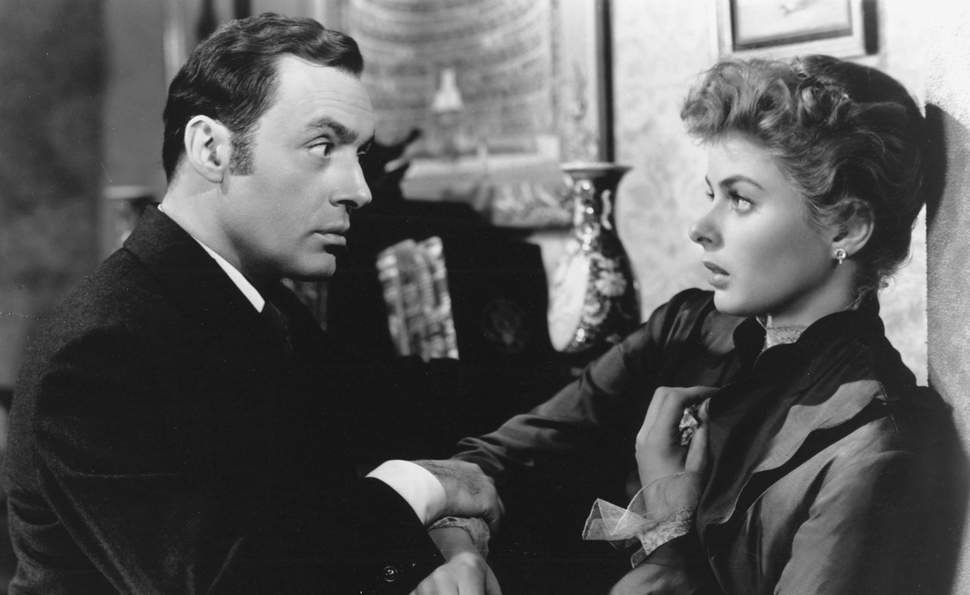 Starting in 1944, Ingrid Bergman won Oscars for all the wrong movies

Hollywood began its tradition of rewarding its greatest actors for the wrong roles early. Ingrid Bergman was somehow not even nominated for her performances in Casablanca, Notorious, or Journey To Italy, yet she won three Oscars for work that’s much less fondly remembered today. Gaslight, which came out a year after Casablanca, unquestionably provided her with a memorable showcase; the movie is about a woman who’s being slowly, deliberately driven insane, and Bergman plays her with a range that encompasses every emotion on the spectrum from low-grade anxiety to full-scale panic. It’s solid work, but everything’s right on the surface, and director George Cukor tends to place Bergman at the center of the frame and have her react with exaggerated alarm to conversations behind her or noises above her. Compare this performance to her turn as a frustrated wife in 1950’s Stromboli, the first film she made with future husband Roberto Rossellini, and it’s clear she was capable of a great deal more complexity than Gaslight allows her, even in a circumscribed context involving marital torment. This is a role that any number of actors could have fretted their way through equally well, and in some ways, Diana Wynyard plays it more adroitly in the British version of the film, made four years earlier—Bergman cranks every reaction up to 11, whereas Wynyard maintains a steady thrum of subterranean apprehension, which is frequently more effective. Mostly, though, I’m just a bit gobsmacked to be reminded that Bergman’s three Oscars were for Gaslight, Anastasia, and Murder On The Orient Express, rather than for any of the canonical classics with which she’s most associated. This kind of mismatch happens all the time, but that doesn’t make it any less bewildering. 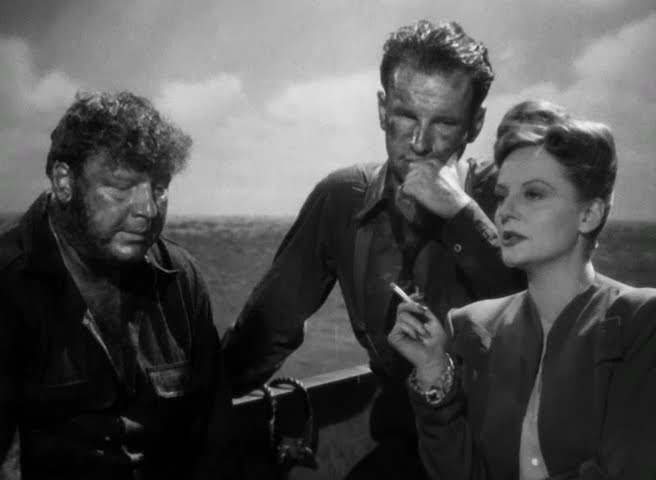 Speaking of bewilderment—a more pleasant variety, this time—just how did the NYFCC come up with this fascinating choice? Bankhead wasn’t an Oscar nominee that year, and while she was top-billed in Hitchcock’s ensemble drama, her role isn’t significantly more prominent than anybody else’s, though she’s having more fun than anybody else. As ace newspaper columnist Connie Porter, she indulges her throaty voice and imperious manner to the hilt, representing in this societal microcosm what was then the American ideal: working-class aristocracy. Over the course of the film, Connie gradually comes down to earth, but Bankhead neither makes her a caricature at the outset nor softens her unduly later; in a scene that sees Connie coaxing a fellow survivor into having his leg amputated, her entreaties are simultaneously baldly manipulative and achingly sincere. Furthermore, she gives Barbara Stanwyck (see below) a run for her money when it comes to embodying sex-on-a-stick, which is doubly impressive given that she’s trapped in a crowd on a lifeboat and was 42 years old at the time. (Though Stanwyck, at 37, wasn’t exactly dewy either.) She’s even somehow sexy falling asleep in the middle of a sentence while talking to another woman.

I’d award Bankhead Supporting Actress, personally. My firm conviction is that ensemble pieces like Lifeboat don’t have leading roles; everyone is basically supporting everyone else. But I’m happy she got some attention, regardless of the category. This is exactly the sort of sharp, unexpected selection that justifies the existence of critics’ awards, which ideally should strive to counteract conventional wisdom rather than simply reinforce it, as they so often do nowadays. Good job, deceased critics.

LAFCA wasn’t formed until several decades later, so let’s use this space to bow down before the year’s most indelible female performance, which was Oscar-nominated but inexplicably lost to Bergman: Barbara Stanwyck in Double Indemnity. From the moment she first appears as Phyllis Dietrichson, the scheming wife who teams up with a naïve insurance salesman to murder her husband, Stanwyck is in complete control, projecting a combination of heat and sangfroid so dangerously alluring that it practically melts the screen. At the same time, however, she keeps the character grounded, always believable—the dialogue (courtesy of Raymond Chandler by way of James M. Cain) are unforgettably stylized, but the emotions seem real, even when they’re being faked. Consequently, it isn’t hard to accept that Fred MacMurray’s wised-up Walter Neff would fall under Phyllis’ spell, even though he sees through her plan immediately and at first skedaddles. Like Bankhead, Stanwyck is sexy in large part because she doesn’t particularly try to be sexy; rather than vamping, she just exudes confidence and self-possession, which is more than enough. Had the Los Angeles Film Critics Association existed in 1944, it very likely would have given its Best Actress prize to Stanwyck—Double Indemnity is a very L.A. movie, which never hurts (just as New York movies have an edge with the Gotham critics), and it’s hard to imagine the group overlooking the epitome of SoCal cool. In the end, though, what are mere trophies and praise compared to the sheer ineffable panache Stanwyck evinces as she stalks supermarket aisles in curled bangs, dark glasses, and high-waisted pants?

Another group not yet born, so again I’ll turn to the other Oscar nominees. The most impressive of these—especially given the soapy context of the movie in which she appears—is Claudette Colbert, playing a woman struggling to raise her children alone while her husband is at war in Since You Went Away. The movie itself, which runs a grueling three hours, tilts heavily toward the maudlin, particularly in subplots involving Jennifer Jones and Shirley Temple as the family daughters, but Colbert provides it with some much-needed backbone, beautifully capturing the guilty conscience of someone who’s aware that sacrifices are necessary, but is nonetheless loath to actually make them.

Thing is, this is another instance of miscategorization—I said “subplots” earlier, but Jennifer Jones has considerably more screen time than Colbert, and her character is the movie’s primary focus almost from start to finish. All the same, Colbert is so much more commanding and sympathetic a presence that it’s not hard to understand why AMPAS voters perceived her as the lead. She gives it her all, and it isn’t her fault that she’s stuck in an endless Selznick potboiler that was eclipsed just two years later by The Best Years Of Our Lives. 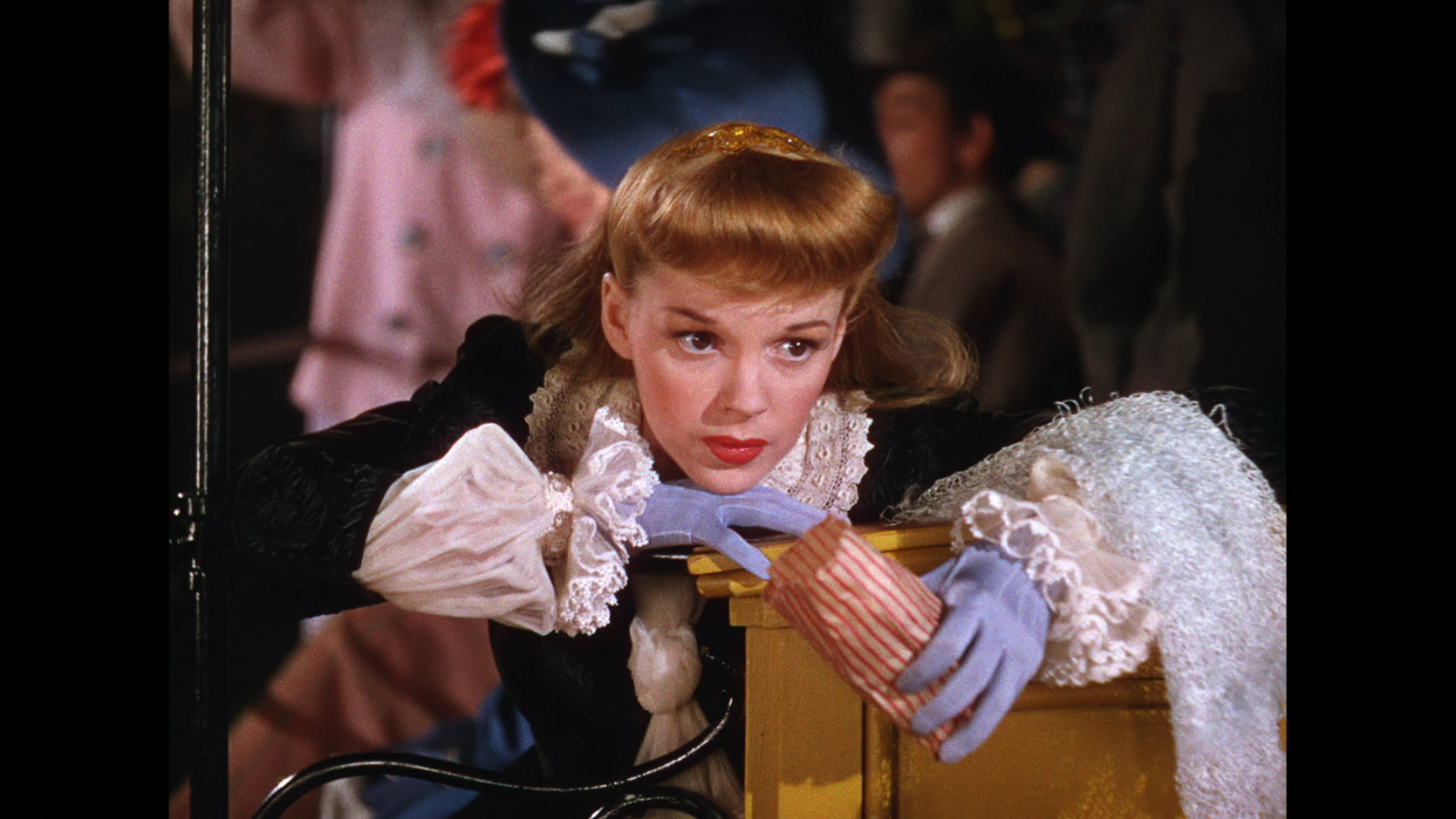 Judy Garland was only 22 when she made Meet Me In St. Louis, and was already on the verge of being washed up. Making the transition from child actor to adult star is never easy, no matter how talented one may be (ask Jodie Foster), and Garland’s first film with future husband Vincente Minnelli was a transitional one, placing her between an older sister (Lucille Bremer) with marital aspirations and two younger sisters, including the precociously adorable Margaret O’Brien. Consequently, nobody took much notice at the time; only years later was Meet Me In St. Louis widely recognized as one of Garland’s greatest vehicles. Which now seems insane, because even in the movie musical’s heyday, few actors ever got three numbers as iconic as “The Boy Next Door,” “The Trolley Song,” and “Have Yourself A Merry Little Christmas” in the same film. Garland’s performance of that last one, in particular, is flat-out heartbreaking, and revelatory for those who’ve never heard the song’s original lyrics. (It was written expressly for this movie, but the revised version usually heard today was commissioned by Frank Sinatra, who felt the movie lyrics were a little too depressing for a potential Christmas standard.) As Garland sings it to O’Brien, at the story’s emotional low point, it represents anxiety about the future channeled into an embrace of the present—her voice and expression make it abundantly clear that the key word in “Have yourself a merry little Christmas now” is now. Other actors could have performed “The Trolley Song,” with its joyous clang-clang-clang, and other actors might have imbued “Merry Little Christmas” with equal depth of feeling (though I doubt it), but nobody else alive, then or since, could have pulled off both.