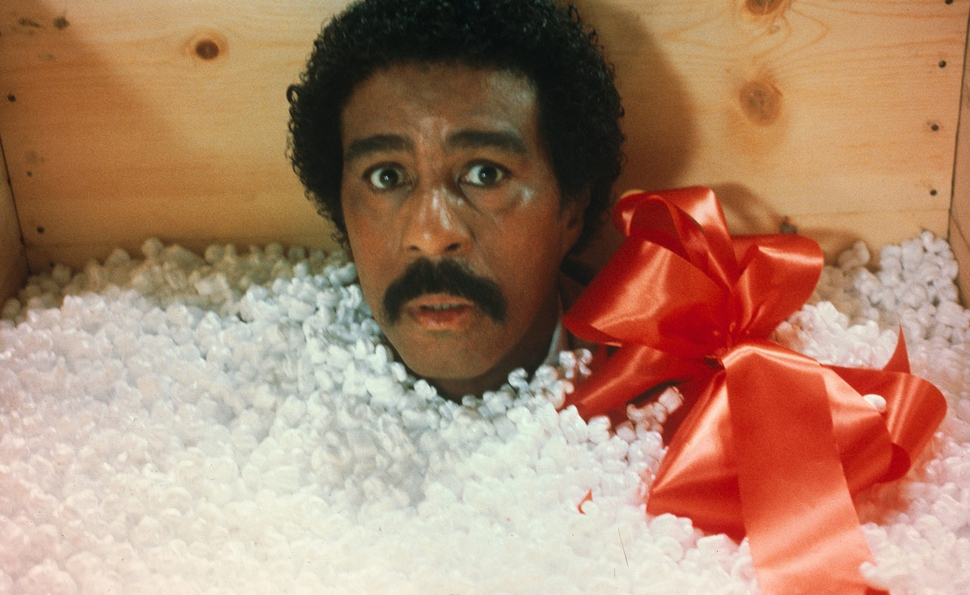 Films written by Francis Veber have probably been remade more than those of any other French filmmaker. Veber’s farcical scripts have been turned into the American films Buddy, Buddy (Billy Wilder’s final film, released in 1981), The Man With One Red Shoe, Three Fugitives, Pure Luck, My Father The Hero, The Birdcage, Fathers’ Day, and most recently, Dinner For Schmucks. Veber isn’t just an unusually prolific screenwriter, playwright, and director; he’s a comedy machine, like Neil Simon or Tyler Perry, and with nearly as distinctive a sensibility. Veber’s films tend to feel like machines as well: formulaic, slick, and more than a little soulless. Veber is so gifted at orchestrating the elaborate mechanics of farce that it usually doesn’t matter which parts go into which machine, or their country of origin. But when Richard Pryor was cast as the lead in the 1982 remake of Veber’s 1976 French hit The Toy, his race irrevocably altered the nature of the project.

In The Toy, a rich father arranges for a grown man to be purchased, or at least rented, as his prepubescent son’s playmate for a week. In the original, that man was played by impish white actor Pierre Richard, a regular Veber collaborator. In the Richard Donner-directed remake, he’s played by Richard Pryor, a casting choice that gave the film a disconcerting racial element that, in a more enlightened era, would have shut down the project. The connection to slavery wouldn’t be quite so pronounced—yet still very present—if the film established that Pryor’s character, the proud but financially desperate Jack Brown, had been hired as the nanny of a spoiled little white boy, or even his personal assistant. But The Toy establishes, in no uncertain terms, that Jack Brown is being bought for the amusement of a deranged moppet.

The film also doubles as a deeply sad, unconscious allegory for Pryor’s treatment at the hands of show business in general, and movies in particular. Pryor is frequently cited as the greatest comedian of all time; his wrenching honesty and candor revolutionized stand-up. (The “Influenced” list on Pryor’s Wikipedia page could rightly include “Literally everyone who followed.”) Onstage, he could be by turns angry, soulful, poetic, self-defeating, raw, tender, defiant, and sad. Yet here, he’s transformed into a clown who makes silly faces to entertain small children for money.

The Toy—which grossed nearly $50 million en route to becoming the 14th highest-grossing film of 1982—so creepily encapsulates the tragedy of Pryor’s film career that its subtitle might as well be The Richard Pryor Story. It’s hard to imagine a more obvious visual metaphor for Pryor’s career than a poster that posits him as a literal puppet on a string, whose movements are being controlled by a rich, white captain of industry (Jackie Gleason as U.S. Bates) to the delight of a cackling child (Scott Schwartz as Eric Bates).

Pryor’s film career wasn’t entirely tragic. After all, he starred in many of the most acclaimed and successful concert films of all time, and gave riveting dramatic performances in movies like Blue Collar, The Mack, Lady Sings The Blues, and Jo Jo Dancer, Your Life Is Calling, his flawed but sometimes compelling semi-autobiographical directorial debut. But his presence in a project as injurious to the human spirit—not just his own, but the human spirit in general—as The Toy stands as a sad testament to the movie world’s inability to do right by him.

A clearly dispirited Pryor brings an air of sadness and resignation to the role of Jack, a journalist who has been unemployed for so long that unemployment has begun to feel like a permanent profession. He’s so desperate for a job that he persists in pursuing one even after he’s told it’s specifically for a cleaning lady. Undeterred, Jack seeks the gig all the same, showing up dressed in a maid’s costume at an important business meeting lorded over by U.S. Bates.

Laughter can be addictive. It’s the oxygen comedies need to breathe. Lowbrow romps like The Toy don’t delineate between good laughter and bad laughter, and if the image of Richard Pryor in a maid’s costume caused preview audiences in Oxnard to lose their shit and made great fodder for commercials and previews, then those factors likely outweighed any lingering concern for Pryor’s dignity.

Jack is fired after spilling soup in Bates’ lap, but he then goes to work cleaning at a department store owned by Bates. There, Eric Bates first spies Jack goofing around on an inflatable toy called the Wonder Wheel, which deflates, causing Jack to mourn its death as if it were a beloved relative. The sequence of Jack and the Wonder Wheel is a glorious illustration of Pryor’s gifts as a storyteller. With nothing more to work with than an inflatable contraption, he creates an entire world and fills it with sadness, friendship, and adventure. He acts out every part in a play that exists solely for his benefit, singlehandedly making the Wonder Wheel the second most soulful character in the film.

Eric watches, and, having been assured he can have anything in the store he wants, he says, “I know what I want. The black man.” This is one of the many places in the screenplay where Columbia Pictures probably should have just backed away—on account of, you know, racism—but plowed ahead all the same. The association between slavery and Pryor’s strange new gig is so obvious, the film is forced to acknowledge it regularly, as when Jack says the issue of white folks buying black folks “got settled in the Civil War.” Still, Bates throws enough money at Jack that, like Pryor agreeing to star in The Toy, he temporarily agrees to forego some self-respect in exchange for a big paycheck as Eric’s “toy” for a week.

Jack is shipped to Eric in a wooden crate that looks unnervingly like a coffin, wrapped with a big red bow that serves to further dehumanize Jack. (It would have      be neat if during the test screenings for The Toy, respondents could have turned a lever to indicate how intensely a specific sequence reminded them of our nation’s tragic racial history.)

Jack isn’t shipped to a mansion in a wooden crate so much as he’s dropped into the infinite pool of sadness that is Eric Bates’ life. As played by Schwartz, with the wit and charm that would someday make him a day player in pornography, Eric Bates is a brat beyond redemption, a migraine-inducing bundle of entitlement squeezed into a military-school uniform that makes him look like a miniature Civil War re-enactor.

The sprawling Bates mansion is really a living museum of societal ills. Eric’s nanny is a stern German woman who watches videotapes of Adolf Hitler speeches in her spare time, and in what sadly qualifies as a typical gag in this PG-rated family smash, pounces on a disgusted Jack, then shrieks, “Oh, how disgusting for him to force himself into my room!” in feigned horror when he rejects her sexual advances. A gag like that might have worked in an alternate-universe version of The Toy starring, say, Robin Williams, where it would not be anywhere near as weighted with echoes of false accusations and lynchings.

The Nazi nanny isn’t the only walking nightmare to be found within the walls of Bates manor. Bates Senior is the sort of casual sociopath who threatens to commit his trophy wives to mental hospitals if they displease him or illustrate too much independence. That threat looms large in the mind of his latest wife, “Fancy” Bates (Theresa Ganzel), a ditzy sexpot U.S. found working at a sleazy dive before he bought her new breasts, and with them, a new life. The Toy is even more unabashed in its sexism than its racism. The film not so subtly posits Fancy as another “toy” to be purchased for a high price, then played with until its owner is bored and in the market for another playmate, preferably of an even younger and more pliable vintage.

Donner, an action specialist, directs the proceedings with the ham-fisted goofiness of a Saturday-morning sitcom. Fancy Bates’ lascivious wriggling is often accompanied by the lusty va-va-voom of stripper music, and Donner isn’t above the use of wacky sound effects and Benny Hill-style fast-motion, employed repeatedly to demarcate that Jack is running away from various dangers really, really, really fast. Stylistically, The Toy is so old-fashioned that it wouldn’t take much to transform it into a silent movie. The performances are already pitched that broadly, and its racial and gender politics wouldn’t feel out of place in the 1920s.

Donner seems to have decided that the only way to make The Toy acceptably, mildly racist instead of intolerably, unacceptably racist, would be to play the whole thing as a cartoon. But the bigness of the acting can’t completely mask the ugliness underneath. Fancy’s big monologue about being found working in a sleazy dive and reinvented as the human sex doll of a wealthy older man is unexpectedly horrifying, even tragic, and the film has to slather sappy music over the scenes of U.S. and Eric together to create the fiction that Eric is a lost child earnestly seeking love the wrong way, not an insufferable brat who deserves the worst life has to offer, as does his horrible, horrible father.

What makes The Toy so queasily compelling today is that it’s not just a story about the undignified, self-defeating things a smart, talented black man will do to make money in a white man’s world, it’s also an illustration of them.  Jack eventually has enough of the Bates’ awfulness, and he quits, but then Bates just keeps offering Jack more and more money until he decides to swallow his pride and stick around despite his misgivings. The Toy doesn’t redeem itself in its third act so much as it grows less terrible once, in the proud tradition of the Magical Negro, Jack sits Eric down and solves all his problems by teaching him that friends are earned through behavior, not purchased with a parent’s enormous wealth.

America tolerates an awful lot of racism, both in pop culture and in everyday lives. But every once in a while, something comes along that should be too racist even for our society, yet we somehow manage to allow it anyway, out of greed, ignorance, or a stubborn refusal to recognize it for what it is. An intense form of cognitive dissonance then sets in. Obviously, Columbia in the early 1980s couldn’t make a movie where an obnoxious white child purchases a black man as kind of a fun, modern form of slavery, and yet The Toy exists, and was a big hit. Just as obviously, no studio would be offensive or ignorant enough to introduce an interracial romance in 2003 with the song “Jungle Love,” yet that sequence exists in Bringing Down The House.

These films were too offensive and insulting to exist, yet they not only came into being, but were enormous commercial successes. To deal with it, we tend to forget about them as quickly as possible. But The Toy now has lived on, assuming a sad, strange second life due to Schwartz’s second career as a porn actor. As chronicled in possibly the saddest E! True Hollywood Story ever, Schwartz kept trying to get a sequel to The Toy off the ground, even after Jackie Gleason died of colon cancer at age 71, and Richard Pryor was sidelined by the multiple sclerosis that eventually killed him at 65. Awful things happened to the stars of The Toy after the film triumphed at the box office. For Pryor, at least, that awfulness extends to everything that happened after he signed on for a project that wasn’t a film so much as a 102-minute assault on his dignity.