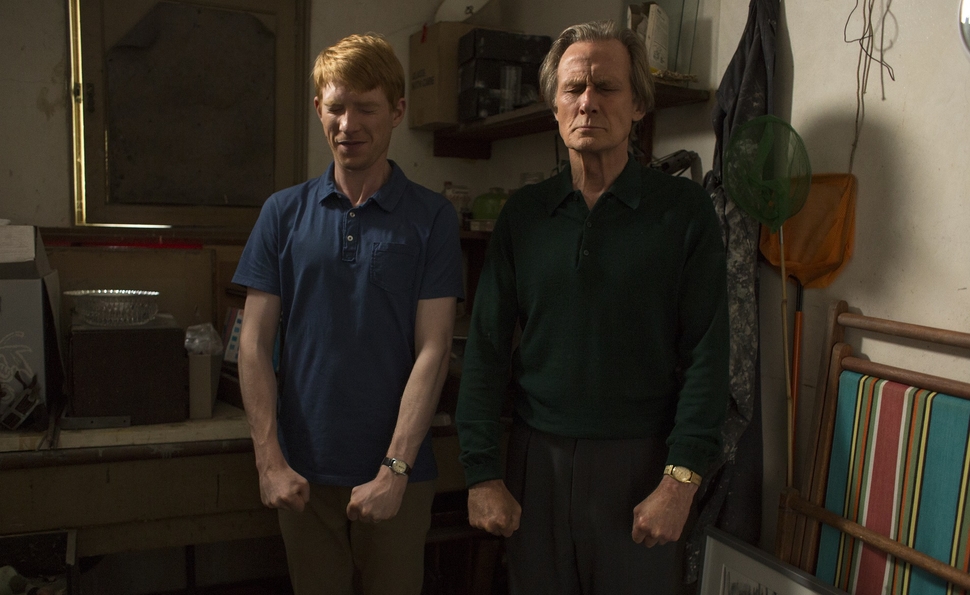 How About Time revolutionizes the time-travel story

At heart, time-travel stories in film are almost always fantasies about perfect control. Everyone regrets some key decision that looks like a mistake in hindsight; on a smaller scale, even the most content people are usually curious about paths not taken, or options not explored. Like so many of the fantasy superpowers that resonate most strongly with audiences, and are most likely to be tapped over and over for new stories, this one is designed to reverse a specific, universal, troubling human weakness: The fact that once someone acts on a decision, it’s too late to go back and try an alternate route.

Books and comics have more freedom to play with the trope, more space to explore it, and often an audience more used to narrow genre experiments. But in film, studios generally want speculative-fiction stories to be accessible to broad audiences, which means time-travel movies almost always do one of a few simple things: toss characters back into colorful historical settings, push them forward into dystopian futures that serve as cautionary tales for the present, or—most commonly—examine the heady fantasy of having a chance, with all the advantages of past experience and advance planning, to make better choices.

The choices in time-travel movies aren’t always conscious: In Back To The Future, Marty McFly is just trying to fix his own accidental meddling with his past when he accidentally vastly improves his family’s present. They aren’t always successful: Evan spends the entirety of The Butterfly Effect tinkering with his timeline, trying to find results that aren’t terrible. They aren’t always serious: Hot Tub Time Machine turns the entire genre into a sloppy comedy, while still embracing the idea that a single self-aware choice in the past may improve everything about the future. And there’s an entire subgenre devoted to the idea of evil time-travelers, trying to undo a positive present: The Borg taking over Earth before humanity ever reached space in Star Trek: First Contact, for instance, or the oppressive AI Skynet trying to kill young John Connor in the Terminator movies, so adult John Connor can’t defeat it and save mankind. Even in Rian Johnson’s Looper, which finds a variety of unusual uses for time travel, “Old Joe” attempts to create a kinder future for himself by carrying out atrocities in the past.

“He gets to have his cake, then jump back in time and eat it too.”

But no matter how the choices are framed, the usual thrust of the time-travel story involves a character getting another chance to set things right. Which is why Richard Curtis’ newly released About Time is one of the most unusual time-travel stories to hit screens. Step by step and stage by stage, it undermines the fantasy and speculates about whether coming to terms with choices makes for a better, smarter, more fulfilling life. (Warning: some spoilers for the first half of the film are ahead.)

About Time centers on the kind of dubious “You’re just going to have to accept this or we’ll never get anywhere” premise that often drives speculative fiction in any medium: In a family that would seem eccentric even without the legacy of secret superpowers, the men all have the ability to travel back into their own pasts. When Tim (Domhnall Gleeson) reaches his 21st birthday, his unnamed dad (Bill Nighy) sits him down for a birds-and-bees-style talk to explain the rules: By clenching his fists and closing his eyes, Tim can jump back to any point in his own past. He jumps back into his own body—there’s no problem with a second Tim running around confusing people by being the wrong age, or in the wrong place. He can rewrite his own history any way he likes—there’s no problem with paradox. (Probably this is why Curtis scripted the time-travel power as an inherited, genetic thing: There’s no “But what if I do something that means we never invent time travel?” contradiction.) As far as anyone knows, the power is entirely limited to Tim’s family—there are no time cops to interdict Tim’s choices, or villains trying to unravel whatever he does. There aren’t even any limits to how often Tim can jump—the power requires little more than a moment’s thought.

In other words, it’s power without competition, without struggle, and almost entirely without cost. That in itself is remarkable for a story about a superpower—usually, the limits on a power define it, and define the story. But Curtis is engaging in a more philosophical thought experiment, examining the basic rules of the universe from a new angle by sidestepping them. It isn’t the limits that interest him, it’s what one nearly unlimited power could mean for a person. He isn’t exploring how a character could use time-travel to re-take his choices, so much as how someone with unlimited choice might choose choice itself.

About Time is one of 2013’s most creative and intriguing films, but it isn’t one of the year’s best. It’s sometimes muddled and self-contradictory. It has logical gaps, which can generally be filled in with vast assumptions, but which don’t make for a tight or satisfying narrative. It veers between tones and genres, starting off as a wry comedy, then turning into an rom-com for a while, then becoming a farce, then a melodrama. In one eerie moment, it’s almost a time-travel horror film. But part of that divergence comes from the way Tim works through and discards a variety of options about what being a time-traveler can mean. When he uses his power to jump back and casually charm his way through a previously botched moment with a crush object, the film feels like a dappled summer romance. When he’s visiting his dad in the past—including on the day of the man’s funeral—it’s a gentle but remarkably effective, emotional drama exploring grief. Tim has one tool in his belt, but he finds it has a wide variety of uses. 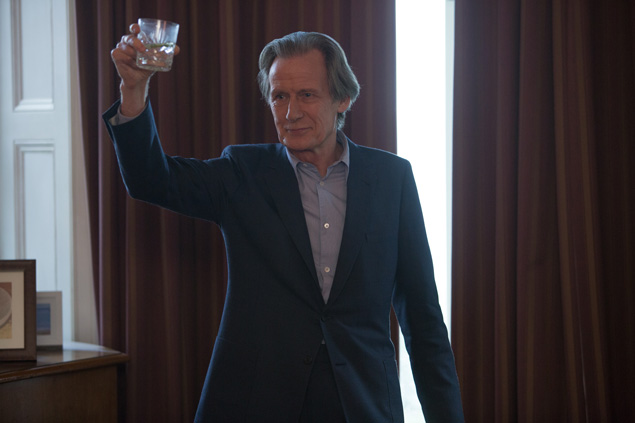 Again, this is remarkable for a film. So often, stories about people with exceptional abilities either rush into conflict, to up the excitement level (see, for instance, Jumper or Chronicle), or radically change the rules to see what a superpowered character does without superpowers, or in situations where their powers can’t help. The idea of methodically, unhurriedly exploring the options and ramifications of a magic-like ability is nearly unique to About Time, and while the approach doesn’t produce an entirely consistent or coherent cinematic experience, it’s still a striking one.

The film’s biggest pitfall comes when Tim’s time-jumping accidentally sabotages his budding relationship with a young woman named Mary (Rachel McAdams). He promptly becomes obsessed with her, to the point where he starts trying to force the relationship to happen, without any regard for her as a person. About Time has most often been compared to Groundhog Day (The Guardian’s Catherine Shoard called it “as close to home as a homage can get without calling in the copyright team”), and there are some major similarities, but the primary difference is that Bill Murray’s Phil in Groundhog Day is stuck in one extremely limited situation he hates and can’t control—reliving one day over and over ad infinitum, which eventually takes him to outsized, manic, comedic ends. Yet Groundhog Day does trump About Time in one way—when Phil uses his repeated days to gain information about his love interest Rita (Andie MacDowell), then uses that knowledge to seduce her, the film makes it clear that he’s going down an unrewarding, unethical, fundamentally skeevy path, and he eventually rejects that false connection and moves on with other options. Tim does the same with Mary—using knowledge gained in a previous timeline to pretend he cares about things that interest her, and to prevent her from meeting her boyfriend from that timeline. In response, the film rewards him with a happy, successful relationship. His life partner just never learns that relationship is based on a gigantic series of lies.

That kind of contrivance damages About Time’s balance, and makes Tim less sympathetic. McAdams’ character strongly resembles the sweet, idealized partner she played in The Time Traveler’s Wife, another film (based on Audrey Niffenegger’s immensely superior book) defined by her relationship with someone who can skip through time. But in that film—another unusual time-travel movie that explores powerlessness in the face of time, rather than wish-fulfillment—she knows her love interest’s secret, and they plan for it and bond by working around it together. About Time’s single biggest conceptual problem is that Tim keeps Mary permanently in the dark, selfishly rewriting her history whenever he rewrites his own. They can never be equals: She’s a prize he gets by choosing his own adventure correctly. His ability to shepherd her around with his power makes their entire relationship suspect and uncomfortably parental, which is not at all how Curtis seems to want audiences to see things.

But then the film moves past the wish-fulfillment part of the story, and gets into deeper waters. For maybe 15 minutes, About Time is the kind of klutzy romantic comedy where two cute people who seem meant for each other have to navigate unlikely barriers. (Albeit barriers entirely of Tim’s choosing, since he’s the one who decides to miss that initial meeting with Mary and do something else he considers more important.) But where a rom-com would end, the story just keeps going, further and further into Tim’s development. The decisions get more complicated as the film unfolds, and he has to set painful priorities. Curtis uses Tim’s power to explore his responsibility to other people. He uses it to explore grief, and the compromises of adulthood, and the need to move on after loss. He uses it to explore the experience of living in the day-to-day, suffering constant little worries and surprises. And eventually, he uses it to comment on what choices mean in life. In essence, the film grows up alongside Tim. In that sense, it’s no great surprise that it doesn’t go back and undo some of his more questionable, selfish choices in youth, though Curtis’ decision to let them slide without comment seems suspect, given how much analysis he devotes to other decisions Tim makes, and how the consequences affect him and other people. In that sense, he gets to have his cake, then jump back in time and eat it too.

But in spite of all its flaws and failings, About Time still reads like an adult take on a juvenile fantasy—one that fully acknowledges why it’s a fantasy, and doesn’t dismiss it as childish, while still considering the ways reality might be better. Tim never meets a nemesis or fights a physical battle. He doesn’t experience any dramatic reversal. He never gives up, or even really analyzes, his ill-gotten, artificially created relationship. He doesn’t lose his powers, or use them to serve the purpose of some grand thesis. He just slowly matures in how he approaches them, and what he uses them for, and when. That’s fundamentally unheard-of in a time-travel story. And it’s a joyously ambitious challenge to anyone whose fiction explores fantasy and forms of power. A really meaningful story acknowledges that life keeps on going, and says, “Okay, you fulfilled that wish. Now what?”