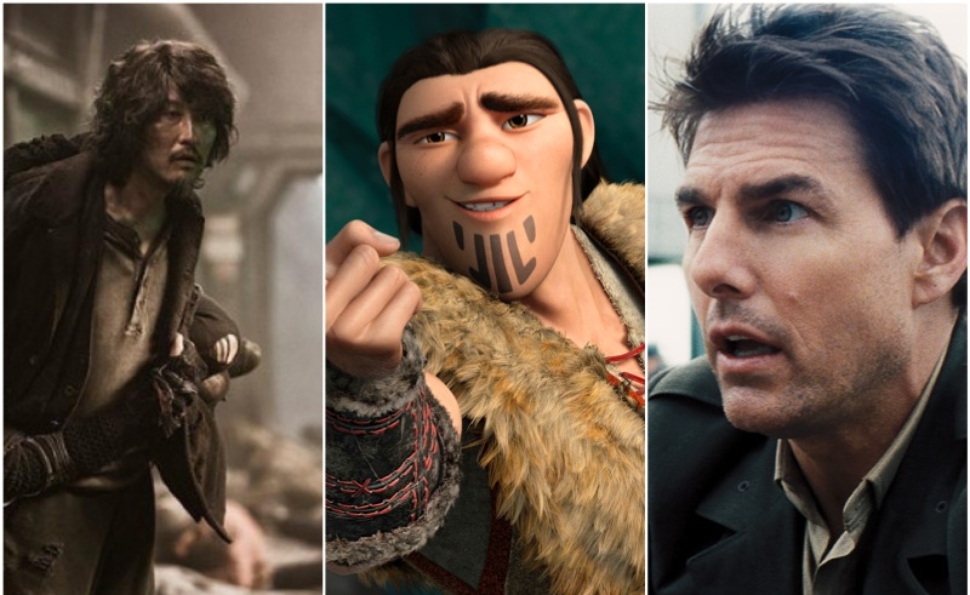 Each month, The Dissolve looks ahead at what’s coming to theaters over the next four weeks, both opening wide and in limited release. (Limited releases are marked with an asterisk; movies being released on VOD are considered to be opening wide; links are to The Dissolve reviews from festival screenings or earlier VOD releases.) Plan your schedules accordingly.

The week of June 6

The big one: Edge Of Tomorrow

Director Doug Liman and a team of screenwriters were brought in to adapt Hiroshi Sakurazaka’s book All You Need Is Kill, about a soldier who gets stuck in a time-loop while fighting alien invaders, and repeatedly dies—though each time, he learns something new that he can use against the enemy. Tom Cruise plays the reluctant hero, while Emily Blunt plays a fellow soldier who knows what he’s going through, and tries to exploit the anomaly to train him. Edge Of Tomorrow is one of the summer’s most expensive movies, and it’s based on a book that isn’t particularly well-known in the U.S., which makes this a real gamble on Warner Bros.’ part. Moviegoers craving more original films and fewer sequels are hoping that this Groundhog Day/Starship Troopers hybrid is strong, and doesn’t get slaughtered at the box office—or that if it does, Liman and company will go back in time and keep remaking it until they get it right.

Borgman* … The latest dark, demented drama from Dutch director Alex van Warmerdam stars Jan Bijvoet as a drifter who stays with a well-to-do family and skillfully ruins their lives.

The Case Against 8* … This festival-favorite documentary recounts the legal drama surrounding California’s Proposition 8, which was meant to ban same-sex marriage in the state.

The Fault In Our Stars … The adaptation of John Green’s bestselling novel about the relationship between two teenagers who meet at a cancer support group has Shailene Woodley as a terminal patient and Ansel Elgort as the boy who tries to make her dreams come true.

Obvious Child* … Comic actress Jenny Slate gets a big-screen showcase, playing a struggling New York stand-up comedian whose romantic and career woes are exacerbated when she gets pregnant.

Ping Pong Summer* … This throwback teen comedy, set in the 1980s, drew a mixed response on the festival circuit, though some responded warmly to its nostalgic vibe and Karate Kid riffs.

Rigor Mortis* … Fans of the classic Hong Kong horror-comedies Mr. Vampire and Encounters Of The Spooky Kind may well be interested in this homage, by director Juno Mak.

The Sacrament … Mercurial art-horror director Ti West makes a mock-doc about a creepy religious cult in a remote country, from the perspective of a group of young journalists who infiltrate it.

Supermensch: The Legend of Shep Gordon* … Mike Myers—yes, that Mike Myers—directed this documentary about a colorful talent manager who became an accidental success.

The big one: How To Train Your Dragon 2

The first How To Train Your Dragon was a heartening success story: a well-crafted, thrilling animated fantasy that caught on largely through word of mouth, in a year crowded with blockbuster animated features, including Toy Story 3, Tangled, Despicable Me, and Shrek Forever After. The reviews from the sequel’s Cannes premiére last month were encouraging, suggesting that DreamWorks and writer-director Dean DeBlois have found a way to build out from the original’s seemingly happy ending, by having the dragon-riding Vikings of Berk go exploring, finding new civilizations, new creatures, and new conflicts.

Burning Bush … Originally aired on HBO Europe as a three-part miniseries, Agnieszka Holland’s decades-spanning story of Czechoslovakia’s fight for independence from the Soviet Union has been edited into a four-hour feature film.

Hellaware … A photographer gets a dubious break when a gallery wants to show his pictures of a young horrorcore rap act—one that really doesn’t appreciate being turned into art.

Hellion … Aaron Paul plays a depressed widower in danger of losing his out-of-control sons, until one of the boys takes up motocross as a way of saving the family.

The Rover* … Fresh from screening in Cannes’ midnight section, the new film from Animal Kingdom writer-director David Michod arrives stateside, with Guy Pearce playing a sullen loner who seeks revenge on a group of bandits in a bleak future Australia.

The Signal* … One of the surprise successes of this year’s Sundance festival, this offbeat science-fiction/mystery film is about a group of college computer wizards who track a hacker’s signal and end up in a strange facility, overseen by scientists in hazmat suits.

Violette* … Emmanuelle Devos plays French novelist Violette Leduc, whose work scandalized the public from the 1940s to her death in the 1970s.

And: Alone Yet Not Alone*, A Coffee In Berlin*, Evergreen: The Road to Legalization*, The Human Race*, Lullaby*, Policeman*

The big one: Jersey Boys

Given that the Tony-winning 2005 “jukebox musical” Jersey Boys has been a hit all over the world, a movie version of The Four Seasons’ story seems like a can’t-miss. But musicals are a tricky sell to modern moviegoers, and though director Clint Eastwood has always worked his love of music into his films, he’s never made a musical before—let alone one with Jersey Boys’ Rashomon-like narrative structure. It should help immensely that the movie has the original Broadway star John Lloyd Young back on board as Frankie Valli. (Also, it has a set of pop songs that are among the most familiar and beloved of the 20th century.)

The Last Sentence* … Everlasting Moments director Jan Troell tackles the life of Swedish journalist Torgny Segerstedt, who spoke out against Adolf Hitler in the 1930s.

Northern Light* … One of the latest in a recent wave of impressionistic documentaries about American life, this film looks at a poor Michigan town as it prepares to host its annual snowmobile race.

Think Like A Man Too … The characters and the creative team from the hit 2012 adaptation of Steve Harvey’s book about modern gender relations return, for a new ensemble comedy set in Las Vegas.

The big one: Snowpiercer*

Like a fine ham, Bong Joon-ho’s Snowpiercer has been dry-aging in The Weinstein Company’s larder for more than a year now, getting just salty enough to serve to American audiences. Based on a French graphic novel, Snowpiercer stars Chris Evans as a passenger in the poor section of a socially stratified super-train, rolling through a post-apocalyptic landscape. Tilda Swinton plays a member of the train’s ruling class, who riles up the masses in hopes of thinning the population. Already a hit overseas (especially in its native South Korea), Snowpiercer has been eagerly awaited by American science-fiction/action fans, as well as by admirers of Bong’s films Mother, Memories Of Murder, and The Host.

Jackpot … This gory Norwegian black comedy was written by Jo Nesbo (the novelist who wrote the book that the offbeat thriller Headhunters is based on), and follows four buddies who can’t agree on the best way to split a windfall.

Nothing Bad Can Happen* … A Christian punk-rocker decides to demonstrate God’s mercy by allowing himself to be violently bullied by a skeptic, who means to break his spirit.

The Internet’s Own Boy: The Story Of Aaron Swartz* … The impressive career and sad death of computer genius Aaron Swartz form the backbone of Brian Knappenberger’s documentary about 21st-century activism.

Transformers: Age Of Extinction … Michael Bay’s fourth movie about robots in disguise swaps out the old cast for a batch of fresh faces: Wahlberg! Grammer!

Yves Saint Laurent* … The first of two (unrelated) biopics about the famed fashion designer stars Pierre Niney, and is the one not directed by Bertrand Bonello.

And: La Bare*, Bound By Flesh, Cabin Fever: Patient Zero, Drones*, The Pleasures Of Being Out Of Step: Notes On The Life Of Nat Hentoff*, Siddharth*