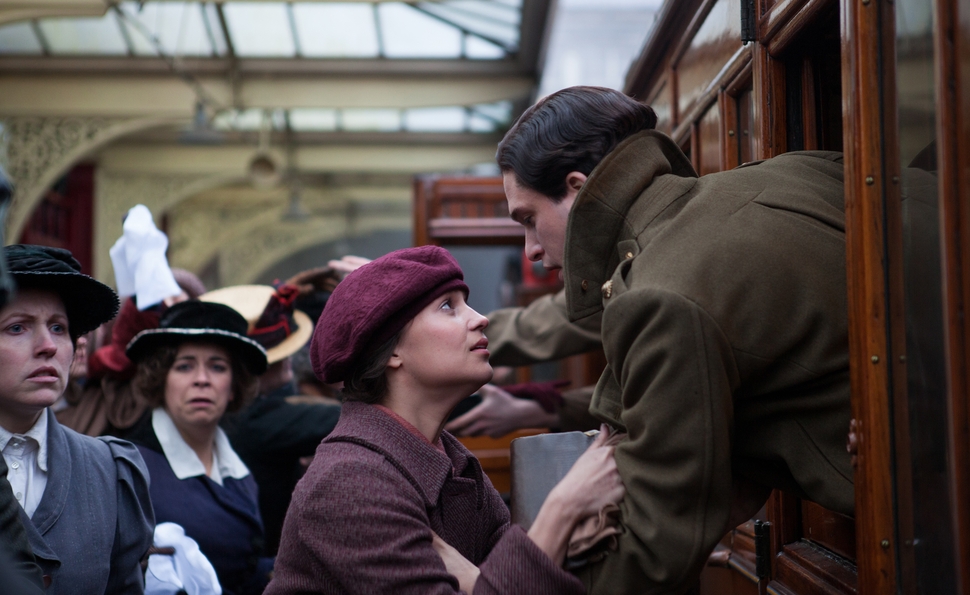 “Writing? That belongs to another life,” Vera Brittain (Ex Machina’s Alicia Vikander) wistfully remarks during the final act of James Kent’s Testament Of Youth, an exceedingly well-made, deeply respectful biographical glimpse at Brittain—who, yes, became a celebrated writer—and the events that shaped her both as a person and as an author. Based on Brittain’s memoir of the same name (she went on to write other autobiographical works in a similar vein, including Testament Of Friendship and Testament Of Experience), the film follows Brittain through her most formative years, centered mainly on the wrenching blows dealt to her by World War I.

Brittain is first seen as a twentysomething who wants nothing more than to attend Oxford’s Somerville College, going so far as studying for the notoriously difficult entrance exam on her own, despite her parents’ protestations that it’s pointless for women to go to Oxford (they can’t even get degrees!), and expensive to boot. Brittain is headstrong, stubborn, and tempestuous (the film’s first act might as well be called Tempestuousness Of Youth, given her big ideas and tragically immature outbursts), and she refuses to be confined by expectations, even those issued by her own family. One of those expectations? That getting an education would delay Brittain from locking down a husband—or worse, keep her from snagging one at all.

“I don’t want a husband!” Brittain wails in the film’s early minutes. Her mighty fit serves as some sort of magical incantation, as she hasn’t even got all her words out before handsome Roland Leighton (Kit Harington) literally strolls into her family’s house. He’s a pal of her brother’s from school, clearly destined to be her main squeeze. Brittain’s romance with Leighton serves as the heart of the film, and although the pair is pleasant enough to watch together, their chemistry is lacking, and the love story never really takes off. Instead, the film soars when it fixes squarely on Brittain, who batters back expectations at every turn, eager to both be herself and to be of service to the world itself.

More satisfying and compelling than Leighton and Brittain’s doomed romance is the bond between Brittain and her beloved brother Edward (Taron Egerton, adorably understated), and her often-fraught relationship with her eventual Oxford advisor Miss Lorimer (Miranda Richardson), who pushes Brittain at every turn, understanding keenly what it means to be a woman in a man’s world. Brittain does make it into Oxford (despite a flub with her exam that nearly ruins her life), but her entrance comes on the heels of a mess of bad news: the war arrives, and both Leighton and Edward insist on joining the fight. News of the war is awkwardly introduced via literal newspaper, as headlines spell out essential events as they unfold, from the assassination of Archduke Franz Ferdinand to rising tensions on the European continent. It’s a cheap way to do things, and it implies the film’s creators don’t think its audience is smart enough to keep up with even the broadest portrayal of historical events.

Fortunately, the rest of the film is respectful, compelling stuff, and while it isn’t particularly adventurous in its telling, it’s often deeply emotional and intensely moving. Brittain’s youthful immaturity and burning passions are charming—or at least Vikander’s beautiful, nuanced work makes them seem so—but they’re overshadowed by the knowledge of what’s to come. Testament Of Youth is not just an absorbing biopic, but a sparse, unsentimental look at the ravages of war. As Brittain’s priorities change, pushing her to put off her long-desired education in order to serve as a nurse during an increasingly violent, vile war, Vikander slowly evolves, and her character’s changes feel remarkable, yet believable. Vikander grows better with each passing role, and she manages to telegraph huge emotions and a rich inner life with just a flick of the eyes or a particular set of her mouth.

The film has a dreamy, hazy quality, and it’s filled with brief flashbacks—a certain look from Leighton, a spray of flowers—that approximate memory in a pleasing, evocative way. During moments of great emotional impact, the camera even fixes on such small details, neatly telegraphing what that memory might look like to Brittain later, when all the horrors and pleasures she’s experienced are just a memory. Vikander is the main event here, and if Testament Of Youth is a testament to anything, it’s to her ability to embody great women with grace and battle-ready precision.