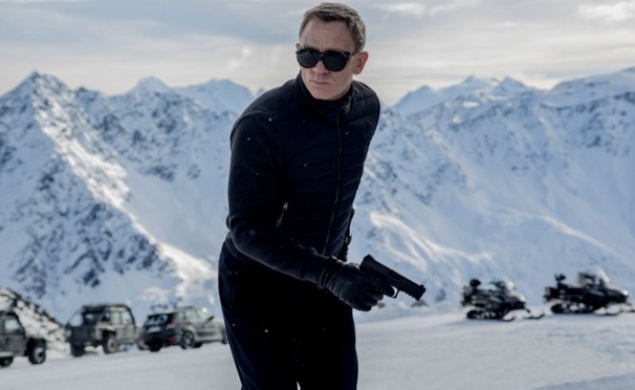 Sure, This Is A New Trailer Of The Day: The “extended TV spot” for Spectre
We premiered the first teaser for Spectre back in March. It was subdued and vague, with lots of moody Daniel Craig stares, lots of snow, Christoph Waltz with his face obscured, and almost no information about the plot. Today, an “extended TV spot premiered,” except it’s shorter than the first trailer, and almost exactly the same, minus a stare or two and plus a few quick and dirty shots of Bond taking people out and smooching at least two separate women. So, I mean, sure, let’s call it extended, and let’s call it new. Why not! It’s Friday, right?

Best Way To Describe Comic-Con Of The Day And Possibly The Millennium: “Fanboy confab” (oh, yeah, and Star Wars: The Force Awakens will be there)
Star Wars: The Force Awakens will definitely be at this year’s “fanboy confab” Comic-Con, so you can stop crying and you can start saying “fanboy confab” because it’s really fun to say. Variety reports that Disney will present “a special look at the film in Hall H on Friday, July 10.” I don’t know what Hall H stands for, so rather than look it up, I am going to tell you that it stands for Heaven! Expected to attend the panel are director J.J. Abrams, producer Kathleen Kennedy, writer Lawrence Kasdan, and “special guests,” which could mean anyone from Mark Hamill to God himself.

Fifty Shades Of Fucked Up Of The Day: Screenwriter Kelly Marcel hasn’t seen her own movie
Much ado has been made (by us, sorry) about Fifty Shades Of Grey’s behind-the-scenes #drama. Writer EL James and director Sam Taylor-Johnson disliked each other so deeply that the latter dropped out of the sequel, the stars maybe want to murder each other (in an unsexy way), James has hired her husband to write the next movie, and now, screenwriter Kelly Marcel is admitting she hasn’t even seen the original because it would be too painful (in an unsexy way). “A lot of what happened on Fifty Shades really broke my heart,” Marcel said on Bret Easton Ellis’ podcast, which seems like the perfect place to air grievances related to S&M franchises. “[EL] would always let me fight for things that I felt passionate about. And in the end, we ended up with a draft that was a halfway compromise. But she had still been very brave about what she had let go.” Girl, I feel you, but go see your goddamn movie. You’re only hurting yourself (in an unsexy way). (Also, somebody has stolen the newest book, Grey, from the publisher. In a very sexy way!)

How To Distract Yourself From Your Own Mortality Of The Day: Play the Mean Girls mobile game
If you often find yourself thinking, “I love spending time on my cell phone, but I wish I could become a digital avatar of Lindsay Lohan,” you’re in luck. Pocket Gems is creating a free, interactive mobile game based on Mean Girls that will go a long way in distracting all of us from our impending deaths. The company has “worked closely with Paramount” to ensure that the story “stays true to original film’s roots” (which are totally not blonde and actually a very dark brown). Apparently, the game will pick up immediately after the film; players will enroll in the fictional high school as seniors and “interact with characters from the film” and slowly lose their senses of self. “You as a user make choices that can affect the storyline. What clothing you are wearing, what you do, the characters that you talk to — every choice you make will affect what happens in the story,” says Pocket Gems’ Jameel Khalfan, who doesn’t even go here.