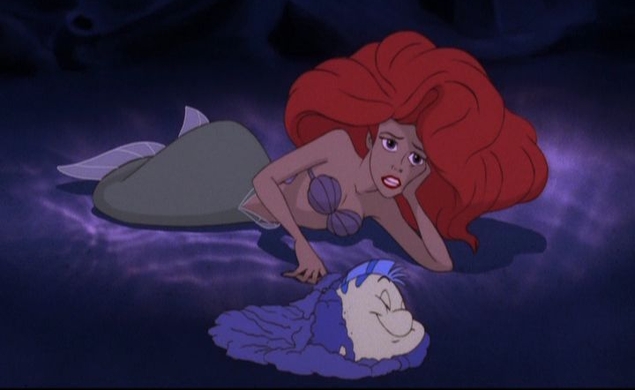 Noooooooooooooooo Of The Day: Sofia Coppola has exited The Little Mermaid
Like sands through a broken, sexist hourglass, so are female directors exiting movies due to “creative differences.” In March of last year, Sofia Coppola said she’d direct the live-actionThe Little Mermaid, which seemed too good to be true, look at this stuff, wasn’t it neat, etc. But she’s just dropped out, citing, yes, “creative differences,” that catch-all nonsense term that makes me want to rake a dinglehopper violently through my own hair. This is why we can’t have nice things (Sofia Coppola, dinglehoppers, snarfblats, etc.).

Please Make Up Your Fucking Minds Already Of The Day: Sony is still testing Spider-Men
After months of deliberating over who will play Spider-Man in the upcoming reboot, Sony still hasn’t picked a goddamn Spider-Man. Overextending our long, national nightmare, The Hollywood Reporter reports that this weekend, six Spider-Man hopefuls auditioned in Atlanta, a city known for its positive vibes. Asa Butterfield, Tom Holland, Judah Lewis, Matthew Lintz, Charlie Plummer, and Charlie Rowe suited up for a “secretive, all-day screen-testing process”; Kevin Feige, Amy Pascal, and Joe and Anthony Russo were all present for the tests, laughing maniacally and snacking on raw human hearts throughout. The studio is apparently “on the verge of choosing the actor who will don the red and blue suit of Spider-Man,” which means nothing, because what is a “verge”? Verges are relative, especially when it comes to Sony being near them. None of this means anything, actually, because “one source, however, cautioned there is a slim chance that Marvel won’t like any of the choices and could keep looking.” Jesus.

Most Vague Statements About The Future Of The Day: Jurassic World’s Colin Trevorrow
Jurassic World director Colin Trevorrow won’t be helming any additional Jurassic Park movies. “Jurassic Park is like Star Wars,” Trevorrow said, which is sooo true, as both star white people. “Different directors can give a different taste to each movie.” For instance, his movie will taste like old keys. Trevorrow added, though, that he’d be “involved in some way, but not as director,” with the upcoming films. Whoa, same.

Anarchic Marketing Thing Of The Day: The Hunger Games: Mockingjay—Part 2 poster
A new poster has dropped today for The Hunger Games: Mockingjay—Part 2, which follows the harrowing journey of six young men as they audition ad infinitum to play Spider-Man. The poster is particularly dope, depicting a crumbling, beheaded statue of President Snow with a bloody Mockingjay logo behind him. In a cute nod to Mad Max’s Furiosa, he’s even missing an arm! In a less-cute nod to anarchy, there’s a hashtag at the bottom that reads #UniteRevolution. Stop trying to rile up today’s youth, The Hunger Games! Who will play Spider-Man if everybody’s protesting the government?

Suspicious Activity Of The Day: Leslie Mann and Judd Apatow drop out of Bad Moms
We reported last month that Leslie Mann would be headlining her first comedy, which had a minefield-laden title—Bad Moms—but was still very exciting because Leslie Mann. But apparently, said atrocious title was an accurate representation of the movie, which Mann and her husband Judd Apatow (who was set to produce) have “abruptly” dropped out of. The official reason given was “the picture wasn’t going to make the window they had carved into their schedule,” which contains a lot of violent imagery: jumping through windows, carving things into other things. Read into it what you will. (Leslie Mann and Judd Apatow were about to be murdered on the set of Bad Moms.)