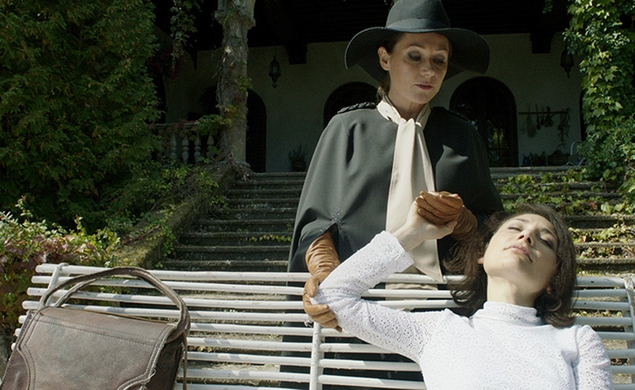 The 2014 Toronto International Film Festival just wrapped up yesterday with The Imitation Game winning the coveted People’s Choice award, which is considered a semi-reliable bellwether for the Oscars. But Peter Strickland’s The Duke Of Burgundy, a clever play on lush ’70s Eurotica movies, won the coveted Dissolve’s Choice award, while Adam Sandler brought up the rear in two different terrible movies. Here are our critics’ choices for the best and worst of TIFF 2014:

1. The Duke Of Burgundy (dir. Peter Strickland): Come for the knowing parody of 1970s softcore erotica, involving two women who play master and servant; stay for the shockingly heartfelt dissection of long-term relationships in which each lover works overtime to share the other’s esoteric interests. The film’s outré surface and tender core are equally bewitching, and perfectly complementary. Sublime.

2. Breathe (dir. Mélanie Laurent): Having burned up the screen as an actor in films like Inglourious Basterds and Beginners, Laurent steps behind the camera to tell the harrowing story of an abusive friendship between two French teenagers. Neither demonizing nor sanctifying either woman, Breathe transfers the familiar seesaw rhythm of codependence to a fresh context that amplifies its emotional power.

3. Heaven Knows What (dir. Josh & Benny Safdie): Right from the beginning of this free-floating immersion into New York junkie life, an assaultive electronic soundscape makes it clear that the Safdie brothers (Daddy Longlegs) have no intention of falling back on clichés. And they’ve made a major find in non-pro lead actor Arielle Holmes, whose real-life adventures on the mean streets inspired the movie.

Men, Women & Children (dir. Jason Reitman): Reitman’s alarming nosedive into tone-deaf idiocy (see last year’s Labor Day) continues with this sprawling, laughably alarmist treatise on the dangers of the Internet age. Imagine the hysterical irrelevance of the Y2K scare in the form of a multi-character epic.

1. The Duke Of Burgundy (dir. Peter Strickland): The only movie I’ve ever seen twice at a single festival, Strickland’s fetishistic pastiche of 1970s Eurotica appealed to me first as someone who’s watched a lot of those old softcore movies, where innocents play out their dark desires in opulent mansions. But as with Strickland’s Berberian Sound Studio, what distinguishes The Duke Of Burgundy is that Strickland’s formalist exercise contains actual human beings, who get bored and frustrated—but also thrilled—by all the preparation that goes into their daily sex games.

2. The Look Of Silence (dir. Joshua Oppenheimer): In the place of The Act Of Killing’s splashy re-creations of genocide, The Look Of Silence subs in the quiet, persistent inquisition of one man who’s lived his whole life side-by-side with the powerful men who murdered his brother. The result is a riveting, poetic film about how the winners and losers process the conflicts of the past.

3. Foxcatcher (dir. Bennett Miller): In a year full of memorable character sketches (including Jake Gyllenhaal’s stellar turn as a go-getting sociopath in Nightcrawler), I was unprepared for the three strong, complex characterizations in Miller’s muted true-crime drama. Channing Tatum as a sullen Olympic wrestler, Mark Ruffalo as his more popular and successful older brother, and Steve Carell as a capricious, manipulative billionaire all play off each other in ways that make Foxcatcher into a reserved but insightful study of how people of different means pursue the American dream.

Good Kill (dir. Andrew Niccol): Give Niccol credit for doing a lot of research into the culture, processes, and ethical concerns of the U.S. military’s drone program, but Good Kill is really just an advocacy doc posing as a fiction feature, with characters swapping speeches about the evils and necessities of drone warfare, in between scenes of them following orders to bomb non-combatants. And while Ethan Hawke’s performance as a benumbed joystick-jockey makes the case for what this program is doing to its participants, his monotone mumble leaves Good Kill as hero-less as it is plotless.

1. The Look Of Silence (dir. Joshua Oppenheimer): Oppenheimer’s follow-up/companion piece to The Act Of Killing is somehow more disturbing, if not more innovative, in confronting the terrible reality of the perpetrators of Indonesian genocide in the late 1960s still enjoying immense political power. By pointing out this very large elephant in the room, the film shows unfathomable courage in the face of unfathomable evil.

2. Winter Sleep (dir. Nuri Bilge Ceylan): Ceylan’s Palme d’Or-winner returns to the arid region of his Once Upon A Time In Anatolia for a rich drama about the tragic folly of a wealthy man who believes himself to be helpful and wise, but is too arrogant to understand why the locals—and his family—detest him.

3. It Follows (dir. David Robert Mitchell): A close call between this and The Duke Of Burgundy, but scary, original indie horror movies are so rare to find and its gimmicky conceit—about a slow-moving creature that takes multiple forms and will keep relentlessly pursuing its victims until they’re dead or are “passed along” to a sexual partner—pays off in skin-crawling fashion. The aggressive sound design is a particular plus.

The Cobbler (dir. Tom McCarthy): Didn’t think any movie could top Men, Women & Children for worst-of-the-fest honors, least of all a seemingly bland, innocuous magical realist comedy about a shoe repairman who discovers he can change into another person by slipping into their shoes. McCarthy’s comic timing is several beats too slow throughout, but once the plot starts twisting, the film really circles the drain.