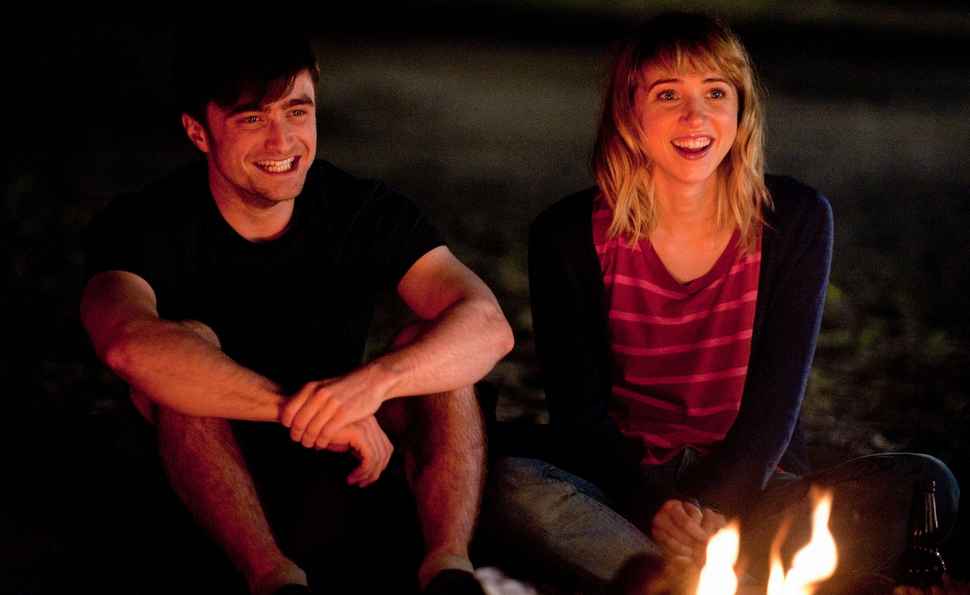 Wallace (Daniel Radcliffe) and Chantry (Zoe Kazan) belong together. That much is clear. They have colorful names, they have weird made-up jobs, and they banter comfortably about refrigerator-magnet poetry and the contents of Elvis’ colon. The question with What If, a Canadian romantic comedy originally titled The F Word, is how much ridiculous rom-com bullshit the movie will throw in their way until they finally acknowledge the inevitable. The refreshing answer: Far less than usual for the genre. Chantry has a long-term boyfriend who isn’t entirely unctuous. Wallace bottles up his feelings for her (and vice versa), and both are honorable enough not to cheat. It’s a common enough situation in the real world, which already separates What If from many others in the genre. Then it adds still more distinctions: wittier best-friend types than usual, an affection for Toronto on par with the Manhattan standard, and a genuine romantic spirit that gets more persuasive as the film goes along. Sometimes, the formula works.

Credit director Michael Dowse (who made the fine hockey sleeper Goon) and writer Elan Mastai, working from a play by Michael Rinaldi and T.J. Dawe, for tipping their hats at the source of that formula: When Harry Met Sally. After their initial meet-cute, Wallace and Chantry spot each other again at a screening of The Princess Bride, by When Harry Met Sally director Rob Reiner. Later, Chantry checks the mailbox twice while sending a postcard, in homage to Meg Ryan. It’s the least the filmmakers can do, after replicating the premise—and plenty of the particulars—of two compatible people who develop a long, platonic friendship until a window of opportunity finally opens up. Both films are filled with talk, talk, talk—between the protagonists and between friends who dispense bad advice—and both have enough insight into real relationships to give the fantasy some emotional weight. (Though just barely, in this case.)

What If gets off to an inauspicious start, with Wallace and Chantry meeting cute at a party and exchanging aggressively quirky repartee that marks them as movie characters. Wallace has come to the party after a year of sulking over an ex, and though he and Chantry have terrific chemistry, he throws her number away after learning about her long-term boyfriend (Rafe Spall). Fate brings them together later at that Princess Bride screening, and after a nice chat at a diner afterward, they shake hands and formally decide to give friendship a shot. They sink into those roles as comfortably as they can, even after Chantry’s boyfriend accepts a six-month stint in Dublin, leaving the pair freer to pursue the feelings percolating under the surface.

What If’s main problem is a good problem to have: The supporting characters are livelier than the leads, and it’s hard not to want to spend more time with them instead. As Chantry’s more sexually aggressive sister Dalia, Megan Park pings nicely off Chantry’s uptightness and uncertainty, but it’s Adam Driver and Mackenzie Davis—as Wallace’s best friend Allan and Allan’s new girlfriend, Nicole—who deserve their own, R-rated spinoff vehicle. Their more spontaneous, volatile relationship is meant to contrast with the bottled-up tension between Wallace and Chantry, and together, Allan and Nicole make a good argument for sex and nachos (in that immediate order), and the pursuit of other such unsavory cravings.

At a time when the once-dominant romantic comedy is an endangered species, What If proves the formulas can still work, under the right circumstances, and without really needing to tweak the recipe much. Creating bright, agreeable characters and casting them well will get a film halfway there, and avoiding phony, contrived obstacles takes it the rest of the way. What If isn’t immune to the genre’s shortcomings: The banter is too banter-y at times, especially during the getting-to-know-you phase, and some of the touches, like bits of sketch animation, are too cute. But in the middle of a drought, What If offers a few fat drops of water.

GoWatchIt: Buy. Rent. Stream What If