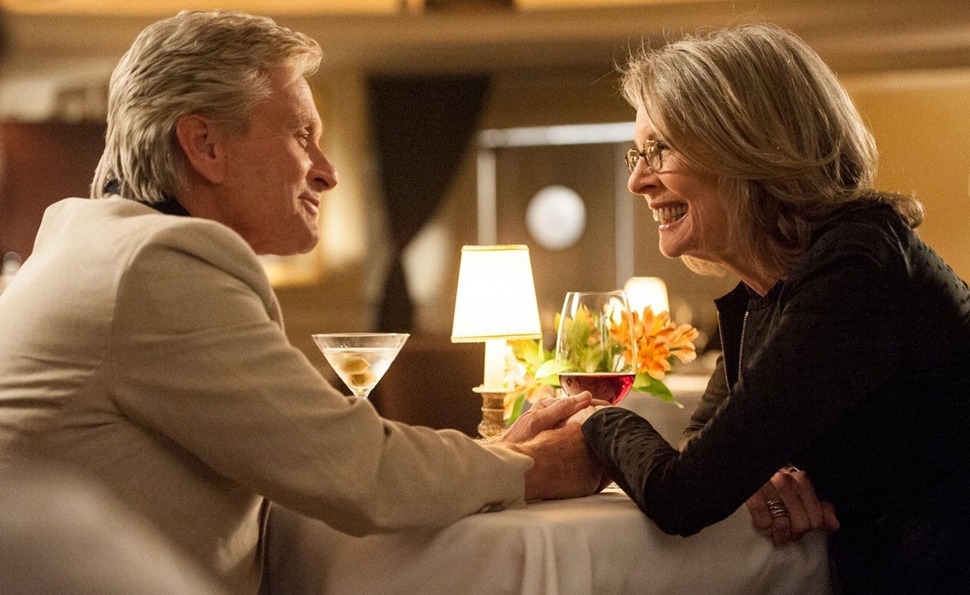 And So It Goes

The always-effervescent Diane Keaton has been down this path many times. She’s carved out a solid second-act career for herself by cleverly going back to the kind of films that made her early years in the business so successful: romantic comedies. The genre itself isn’t flourishing—gone are the days of Nora Ephron’s emotionally engaging films, or the surefire charm of putting Meg Ryan next to just about anyone and calling them a couple—but rom-coms that tackle later-in-life love stories continue to crop up, with Keaton reigning as their current queen.

Rob Reiner’s And So It Goes drops Keaton firmly in familiar territory. Winningly warm and given to wearing huge belts, her Leah is the kind of character anyone (especially ticket-buying audiences) would want to see happy and well-loved, which makes the film’s insistence on pairing her with Michael Douglas’ painfully flawed and plain mean Oren so maddening. Leah and Oren are both still reeling from the deaths of their respective spouses: Leah cries constantly (especially while she’s singing, which is hard on her blossoming career as a lounge singer), while Oren uses the decades-old death of his beloved wife as an excuse to be a first-class bastard to everyone around him. But that barely gives them enough in common to bring them together, and it isn’t a strong enough cornerstone for a film that’s ostensibly about romance.

Leah and Oren get tossed together by proximity, a favorite device of the genre. They live next door to each other in a charming fourplex that’s solely inhabited by Leah, Oren, and two families who despise Oren, regarding him as vaguely racist and unabashedly rude. Oren doesn’t do himself (or anyone else) any favors, and it’s no surprise that everyone else who lives in “Little Shangri-La” wishes he’d just move out and let them get back to their otherwise overly friendly existence. But Oren, a misanthrope who hates people, yet makes his living as a real-estate agent (a baffling marriage of man and vocation if there ever was one), can’t leave just yet. He’s got one more house to sell.

Of course, it isn’t just any old house—it’s his house, and once he gets someone to pony up on its inflated price tag, he’s outta there. It’s the realtor equivalent of a “one last job” heist flick, and Oren even refers to the sale as such, signaling that it will change everything for a guy interested only in cold hard cash. The inevitable narrative wrench in Oren’s plan is the arrival of his son Luke (Scott Shepherd), a recovering heroin addict who announces his past transgressions both by wearing a seasonally inappropriate black leather jacket, and by loudly proclaiming, “Heroin is an ugly drug.” With him comes  a granddaughter Oren never knew existed. Luke, it seems, is bound for prison (though not for drug offenses), and he needs someone to take care of young Sarah (Sterling Jerins) for nearly a year. Can Oren do it? Of course not, but it’s easy to guess who will help him out when it comes to opening himself back up to familial affection.

By romantic-comedy standards, Oren and Leah are a perfect match; he’s a jerk and she’s emotionally unstable. But no matter how much charm the duo pour all over the weak narrative and paint-by-the-numbers plot, And So It Goes can’t hit any high notes. (Keaton, resplendent on the stage, belting out standards and new classics, is another story.) Keaton and Douglas, who are funny together in a platonic capacity, completely lack romantic chemistry, and when Leah and Oren inevitably start approaching that territory, it feels embarrassing and ill-conceived.

The film’s tone is similarly misguided, scattershot and often uncomfortable, with whiplash-inducing shifts that pile on dark stuff (drug addiction, poverty, illness, animal abuse) before rapidly zipping into light-hearted family outings. Scenes that seem to foreshadow something terrible just around the bend—a wild amusement-park ride, an obvious disregard for seat-belt safety—hang on just a bit too long, before being dropped, seemingly at random. If nothing bad is going to happen, why does it feel like everything is constantly on the brink of major disaster?

Reiner and screenwriter Mark Andrus attempt to give the film a punchy modern zip, but the tone plays as disingenuous and dated, and offhand comments about apps and the power of iPhone cameras sound shoehorned-in and silly. At one point, a supporting character attempts to explain a modern friendship to Oren: “I Googled him. And friended him on Facebook. We’ve been texting.” He doesn’t so much as pause to catch his breath. Oren, of course, doesn’t understand a lick of it.

Romantically uninspiring and comedically unstable, And So It Goes is a poor excuse for a rom-com, even one that continually plays by the rules of the genre and has two major stars to keep it bouncing along. Reiner’s film goes nowhere fast, and then keeps going until even its most winning elements—solid stars, scattered laughs, attempts at feel-good lessons—fizzle out and fade away.

GoWatchIt: Buy. Rent. Stream And So It Goes