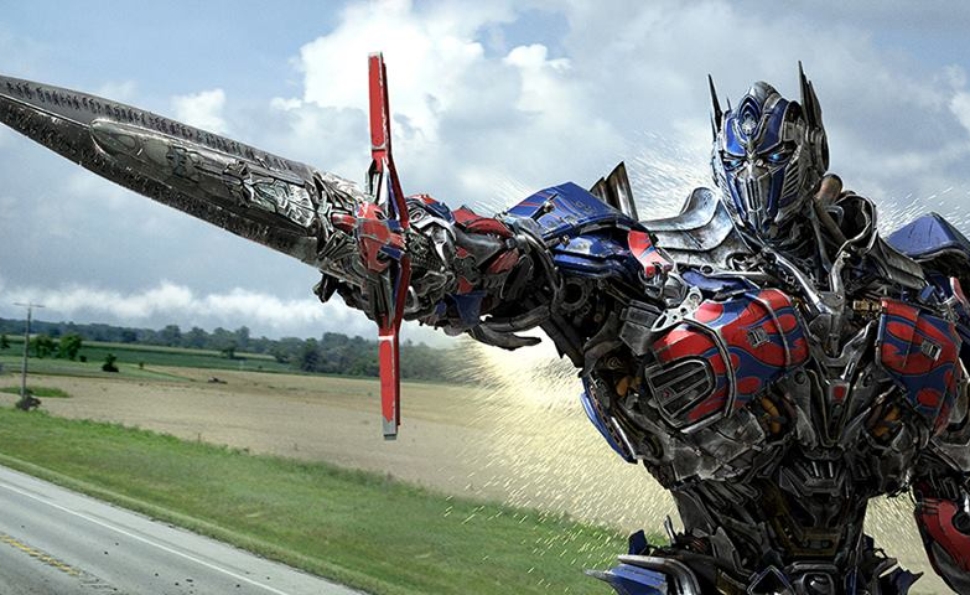 Cade Yeager isn’t a good inventor. He spends his days foraging for junk he can turn into crude robots. None of them work properly, and he’s falling behind on his bills; the bank is already on the verge of evicting him from the rural Texas home where he lives with his 17-year-old daughter, Tessa. An overprotective single dad, Cade won’t let Tessa date or even go for a ride with her friends, but after he randomly discovers and reactivates a Transformer, he decides to take her with him on an incredibly dangerous quest. Cade Yeager also isn’t a good father.

He finds the Transformer, Optimus Prime, in an old theater, the site of Transformers: Age Of Extinction’s first scenes. The son of the theater’s crotchety owner wants to sell the place; Cade only wants the old semi-truck that’s inexplicably parked inside. Wandering through the decaying ruins of a once-glorious movie palace, the characters bemoan the current state of Hollywood. “The movies nowadays!” one gripes. “Sequels and remakes, a bunch of crap.” Having declared cinema dead, director Michael Bay then spends the next 165 minutes desecrating the corpse.

Give Age Of Extinction this much credit: Of all the Transformers movies, this is the longest. And save for a few visual centerpieces and a couple of amusing supporting turns, it’s also an endless, incoherent mess. It would be easier (and possibly quicker) to attain total spiritual enlightenment than to fully comprehend the slippery motivations of the characters in this story, which sprawls through centuries and travels around the world, but never finds a meaningful conclusion. It begins in the wake of Chicago’s cataclysmic destruction in Transformers: Dark Of The Moon, as the U.S. government cuts all ties with the heroic Autobots, and an elite CIA unit led by xenophobic Harold Attinger (Kelsey Grammer) is tasked with hunting down all surviving Transformers. Meanwhile, a bounty-hunting robot named Lockdown (voiced by Mark Ryan) scours the globe for Autobot leader Optimus Prime (Peter Cullen). Who Lockdown works for, or why his alien masters want Prime, is never explained, but perhaps that’s the sort of minor detail there’s simply no room for in a lean, efficient 165-minute movie.

Cade (Mark Wahlberg) and Tessa (Nicola Peltz) find Optimus and awaken him just as Attinger’s minions pull up to the Yeager homestead, where they’re all rescued by Tessa’s secret mimbo boyfriend, Shane (Jack Reynor). After a narrow escape, they head to Chicago—apparently not as destroyed as advertised—where they break into the headquarters of an Apple-like tech giant. While its CEO, Joshua Joyce (Stanley Tucci), tries to build Transformers from scratch, the actual Transformers start showing up. They include Hound, a truck that turns into a robot that talks like John Goodman, and Drift (Ken Watanabe), a sports car that transforms into a noble Japanese samurai robot, because what would a Transformers movie be without at least a little racial stereotyping?

The Attinger, Joyce, and Lockdown storylines inevitably and illogically begin to dovetail, because otherwise the movie would never end. That’s Michael Bay for you—he never met a plot hole he couldn’t ignore. To paraphrase former NFL coach Dennis Green, Bay is who we thought he was. He likes fast cars, slow motion, low-angle shots, meandering plots, childish slapstick, women in short skirts, men with two days of beard stubble, big guns, and bigger explosions. Transformers: Age Of Extinction is the sort of movie where a man gets head-butted by a car, and Mark Wahlberg, playing your average single-dad-amateur-technologist-action-hero from the Boston area of Texas, fights robots with a giant sword he shoots like a semiautomatic rifle.

Bay’s only non-financial interest in the Transformers franchise at this point is visual. On that front, at least, Age Of Extinction isn’t a disaster. The unquestionable high point is a dogfight that takes place over the streets of Chicago. As the human heroes and their Autobot allies are pursued by Lockdown’s forces, Bay’s camera glides over, under, and around their two spaceships, bobbing and weaving through the canyons of the Windy City. Impressive special effects and Amir Mokri’s 3-D digital photography combine to create perhaps the most convincing illusion of high-elevation flight in movie history. It is impossible to explain how this dogfight begins, or why it happens, or what either side stands to gain from it (since the only character who truly matters at this point in the Age Of Extinction, Optimus Prime, isn’t involved) but it is spectacular.

Highlights like that, though, are few and very far between. Far more common are scenes where Cade bosses his daughter around—even ordering her to rappel from an alien ship to the top of Willis Tower without a safety harness at one point—or Optimus Prime grumbles about mankind’s repeated betrayals of his noble alien race. (To be fair, he kind of has a point.) If Age Of Extinction were 30 percent shorter and 30 percent sillier, it might be bearable. But a couple of genuinely impressive images and Stanley Tucci rambling about a magical element called “transformium” aside, it’s a brutal, punishing slog. There’s a random digression about Texas’ Romeo and Juliet laws; a completely irrelevant cameo from Megatron, the villain from the first Transformers trilogy; and two totally different sets of metal dinosaurs—one from millions of years ago, the other in 2014—that seemingly have no connection to each other, beyond the fact that Michael Bay thought they both looked cool.

Bay and screenwriter Ehren Kruger pepper the scenes between explosions and dire comic relief with a few ideas about personal freedom. In one key moment, a Transformer declares “I’m a slave to no one!” The line “We all work for someone” gets repeated several times. In the big climax, the Autobots release the Dinobots, who have been imprisoned by Lockdown, to battle Joyce’s mass-produced, factory-built Transformers, which Optimus claims have no souls. And yet this paean to freedom and screed against soulless consumerism is jammed with wall-to-wall product placement, including a sequence where a Transformer destroys a beer truck just so the camera can linger over its spilled cargo of Bud Light. Wahlberg dutifully pops one open and chugs it down. It’s a dismal episode worthy of Bud Light’s current slogan, “Welcome to Whatever, USA.” That might as well be Age Of Extinction’s slogan too.

Age Of Extinction’s mercenary undertones, coupled with its metatext about the death of cinema, suggest a theme of directorial self-loathing. If the movies are dead, if the age of extinction of the film’s title is a cinematic one, then surely franchises like Transformers—boring, stupid, endlessly rehashed, yet hugely successful—are partly to blame. Bay said on several occasions that he wasn’t interested in making a fourth Transformers, and yet here he is at the helm of another feature-length commercial for toys and beer and energy drinks and lingerie. We all work for someone.