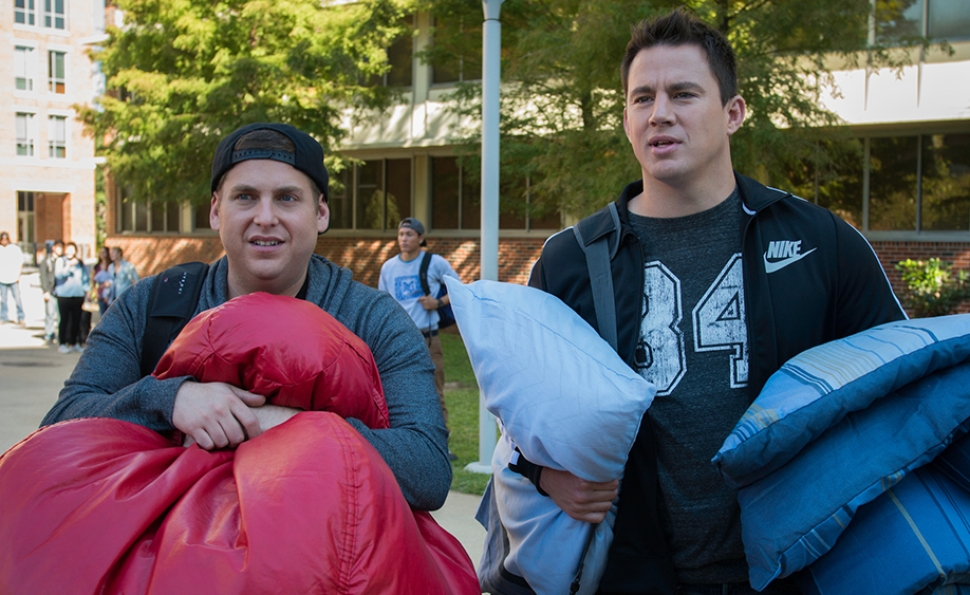 Directors Phil Lord and Christopher Miller have a talent for spinning gold out of franchise dross: They turned a slender children’s picturebook into Cloudy With A Chance Of Meatballs, revived a disposable late-1980s Fox TV procedural for the inspired buddy comedy 21 Jump Street, and earlier this year, made The Lego Movie seem as if the merchandising cart wasn’t driving the creative horse. With 22 Jump Street, Lord and Miller have now directed two live-action features and two animated features, and the real key to their success is they don’t distinguish between them. Like a two-headed Frank Tashlin (Will Success Spoil Rock Hunter?)—though they aren’t entirely on his level yet—Lord and Miller are inspired gagsmiths who are plugged into popular culture and tremendously skilled at layering jokes of multiple varieties. Meta jokes, silly jokes, visual jokes, verbal jokes, referential jokes, throwaway jokes, carefully orchestrated jokes: They just keep coming as fast as they can.

Built on a foundation of extreme self-awareness—another feature of an animator’s sensibility—Lord and Miller’s 21 Jump Street mocked the very notion of a creatively bankrupt Hollywood reviving a moribund TV show, but went through with it anyway. 22 Jump Street takes the absurdity to another level, mocking sequels to such frivolous enterprises while commenting openly about repeating old formulas and the perks of working with a larger (but not unlimited) budget. After going undercover as conspicuously mature high-school students to bust up a designer-drug ring in 21 Jump Street, Schmidt (Jonah Hill) and Jenko (Channing Tatum) try to take their partnership to the streets, but failure brings them back to the same program. Now working out of a Vietnamese church across the street from the Korean church that served as a base of operations in the first film, the belligerent Captain Dickson (Ice Cube) assigns Schmidt and Jenko to pose as conspicuously mature college students to bust up another designer-drug ring.

22 Jump Street insulates itself from criticism by commenting on its own warmed-over rehashing of 21 Jump Street, but there are plenty of college-specific (and college-movie-specific) jokes on top of that. The rift between Schmidt and Jenko in the first film, when Schmidt got in with the popular crowd and Jenko fell in with the science nerds, reverses itself when the two move into freshmen dorms. Investigating a student’s death from a drug called “WHYPHY,” which grants four hours of Adderall focus followed by another four hours of acid trip, Jenko becomes BFFs with Zook (Wyatt Russell), a frat guy and star quarterback, and Schmidt is relegated to the art majors, including Maya (Amber Stevens), whose room is across the hall from the victim’s. Once again, they find users and dealers, but the supplier is a question mark.

In other words, 22 Jump Street tells the exact same story as 21 Jump Street, and it’s willing to be first (and second, and third) to admit it. Lord, Miller, and their screenwriters (Michael Bacall, Oren Uziel, and Rodney Rothman) swan-dive into the rabbit hole of self-reference, calling back to the first film, calling back to the series, sending up sequels’ repetition and excess, and playing with the economics of moviemaking. (Schmidt and Jenko try, with mixed success, to lead a car chase through less-expensive sets, to save their department money.) Still, the film’s awareness that it’s repeating itself doesn’t necessarily make that repetition fresh—or make the self-awareness fresh, for that matter. There’s no place to go beyond meta.

Whenever 22 Jump Street threatens to stare too long at its own navel, however, Hill and Tatum are there to rescue it with good old-fashioned buddy-cop chemistry. They’re the classic study in contrasts, and their renewed partnership gives the film an opportunity to treat them as a old married couple, a pair that bickers relentlessly, but are so in sync they can complete each other’s sentences. Tatum has grown into an especially strong comic actor, with that face that reads as hilariously blank, but with an offhand wit and childlike enthusiasm that’s completely infectious. 22 Jump Street squeezes every last drop of comic inspiration it can get from Tatum and Hill, as well as the very notion of a sequel to such a superfluous enterprise. And though it shows 23 Jump Street under construction—it’s a condo building next to the Korean church—it’s probably best if no one moves in.