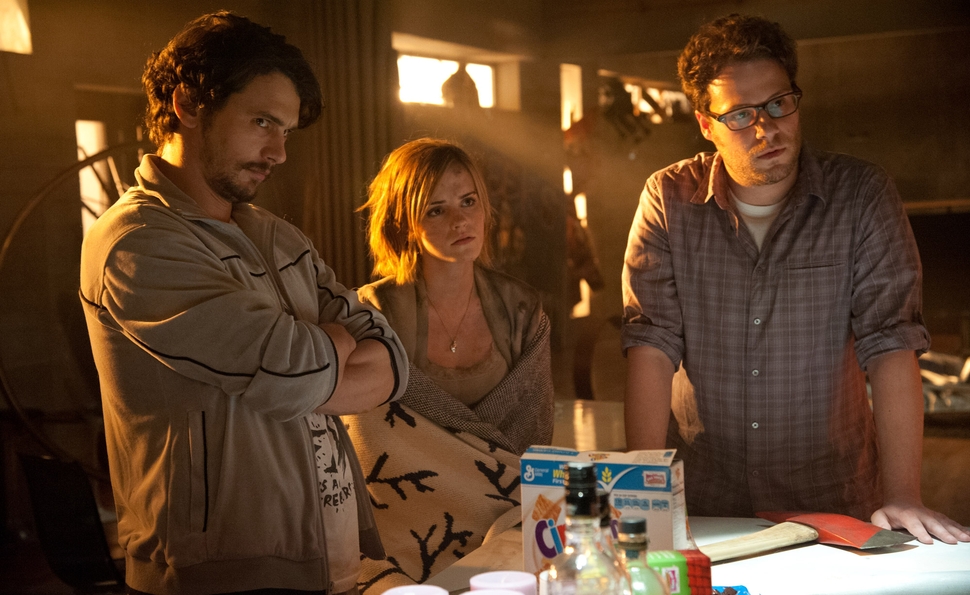 With This Is The End, co-writer, co-director, and star Seth Rogen and his buddies in the Judd Apatow gang have made a film by, for, and about themselves. Rogen impishly faces the accusation that he plays the same character in every movie, and answers it by playing “Seth Rogen,” a fictionalized version of himself. (Except for some bit players, everyone in the film’s cast applies their own name to their character.) Rogen similarly responds in the most adolescent manner imaginable to criticism that his films are little more than celebrations of eternal adolescence. Rogen has created a film where he and his buddies smoke weed, banter, and chill, even when confronted with the apocalypse.

Rogen throws down the gauntlet early with a sped-up, Benny Hill-style montage of himself and Jay Baruchel watching television and smoking massive amounts of weed, and he doesn’t stop until a film-closing production number that’s no less potent or effective for being a cheap nostalgia trip. Labels like “self-indulgent” and “juvenile” don’t begin to do justice to This Is The End’s endless fascination with itself and/or the hilarity of bodily functions. After the Your Highness debacle, co- stars James Franco and Danny McBride might have been scared away from lowbrow, genre-mashing scatological comedies prominently featuring the outsized phalluses of mythical beasts, but there has been tentacle porn less concerned with monsters’ sexual organs than This Is The End.

This Is The End opens with Rogen picking up Jay Baruchel from the airport for some stoned revelry, and continues on to a debauched Hollywood party at James Franco’s mansion. Once close friends, Rogen and Baruchel have been drifting apart for years. Yet the problems in their friendship are dwarfed by the complication of an apocalypse the revelers initially mistake for an extinction-level earthquake, but that ultimately proves to be a reckoning out of the book of Revelation. That consequently makes This Is The End the rare Rapture movie on the sinners’ side.

Like Shaun Of The Dead, This Is The End lightly satirizes its protagonists’ stoner/slacker obliviousness by having them not notice that society is being ripped asunder until an apocalyptic event is well under way. In its first act, This Is The End cultivates a druggy, smart-ass, cult-friendly after-midnight aesthetic as it raunchily surveys the kind of party where seemingly everything can happen, including, but not limited to, the epicenter of the entertainment universe becoming a fiery hellhole ruled over by roving gangs and demonic beasts. The film is hysterical in the sense that it approaches a screaming, flailing fever pitch even before everything goes flamboyantly to hell and the demons show up.

This Is The End is a real Los Angeles movie that conveys how the city can seem like both a consequence-free pleasure palace and a hell on earth, sometimes at the same time. Part inside-show-biz satire, part gothic horror-comedy, This Is The End sometimes suggests Entourage After Dark, in that it takes that show’s winking self-aggrandizement-disguised-as-self-deprecation to its dark, transgressive extremes, most notably by positing Michael Cera as a perpetually stoned sex maniac.

In This Is The End, the residents of the contemporary Sodom and Gomorrah that is Los Angeles pay a stark price for their sins, as Baruchel, Rogen, and Franco join fellow partiers Craig Robinson, Jonah Hill, and eventually Danny McBride on a desperate quest for survival that mostly involves panicking, using lots of drugs (including an Ecstasy sequence set to Psy’s “Gangnam Style” that’s already showing its age), urine-drinking, an exorcism, and lots of dick jokes. It’s a quintessential boy’s movie whose most significant female role involves Emma Watson briefly running around with an axe, chopping the head off a giant statue of an erect penis, then disappearing into the darkness. Otherwise, the only women in the film are Rihanna, who gets her ass slapped by Cera (playing a zonked-out, drug-addled caricature of himself); Mindy Kaling, who expresses a strong desire for Cera’s skinny, hairless, coked-up cock; and two nameless women seen briefly performing sexual acts on Cera in a bathroom while he sips from a juice pouch. There’s simply no room for women in Rogen and company’s boys’ club. There’s also no room for subtlety, nuance, taste, or restraint. 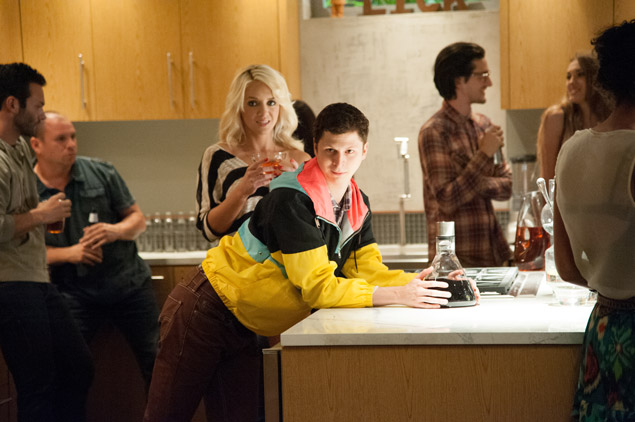 There’s a trenchant satire about celebrity entitlement buried somewhere within This Is The End, but the film is ultimately more celebration than critique: Even with the world crumbling around them, these guys get off relatively easy. But while the film is unmistakably a puerile, self-indulgent mess, it’s also often funny and entertaining. This Is The End is overflowing with ideas, many juvenile but some inspired, as well as some genius stunt casting involving a Hollywood hunk in an unexpected position.

This Is The End begins as a naughty inside-showbiz satire, but morphs into a gross-out horror comedy whose lineage can be traced back to the gore-infused slapstick of Sam Raimi’s Evil Dead movies. McBride is a hoot even as he shamelessly recycles his most beloved creation, Eastbound & Down’s Kenny Powers. (Either that, or McBride genuinely is Powers, which would be both worrying and awesome.)

A ready-made cult movie whose cast and crew are liable to be the most fervent members of the cult, This Is The End is primarily devoted to making its creators chuckle. The laughs are cheap and superficial, but at least they’re steady, even though the film’s embrace of excess ultimately proves exhausting, like a fun party that grinds on into a hangover.

This Is The End feels throughout like a feature-length inside joke, but Rogen and company are generous enough to let the audience in on the gag. And while the film could be called a glorified home movie, at least Rogen’s glorified home movies are entertaining, which is much more than can be said of Adam Sandler and his similarly self-indulgent, immature Grown Ups franchise, which has all of this film’s faults and none of its naughty, transgressive virtues.

GoWatchIt: Buy. Rent. Stream This Is The End