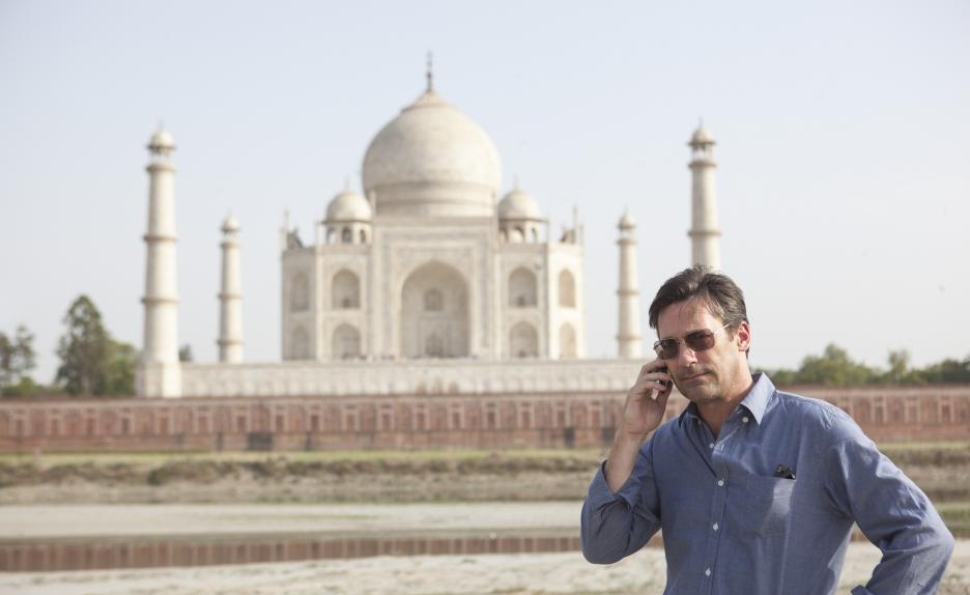 Based on a true story, Disney’s Million Dollar Arm is the inspiring tale of how two unlikely pitching prospects from India are lifted out of poverty and brought to America, where they get a chance to teach a rich sports agent to be less of an asshole. That isn’t the intent, of course: Any such life lessons are supposed to be the byproduct of an emotionally stirring cultural exchange between desperate Americans looking for an untapped well of baseball talent, and earnest young Indians looking to make dreams they’ve never dreamed come true. But like so many inspirational sports movies before it—The Blind Side and Glory Road, to name two recent “true stories” brought to life—Million Dollar Arm is more about white sponsorship than the achievements of persons of color. Though these two kids travel halfway across the world and learn to adapt to a radically different culture, they’re the supporting players here, the catalysts. Jerry Maguire does the real changing.

This Jerry Maguire is played by Jon Hamm, a master at callow salesmanship on Mad Men; that makes Million Dollar Arm go down easier, as does the reassuring slickness of the production, which is boilerplate Disney live-action. Opening a couple of years after J.B. Bernstein (Hamm) and his partner Aash (Aasif Mandvi) have left a major sports agency to strike out on their own, the film finds them one lost client away from going bust. One night, inspiration strikes when J.B. is channel-flipping between a cricket game and footage of Susan Boyle on Britain’s Got Talent: India may not have any national interest in baseball, but surely there are some bowlers—cricket’s equivalent to pitchers—with enough heat to make them into big-league prospects. If J.B. and Aash’s “Million Dollar Arm” competition in India is successful, then it might go a long way toward converting a billion new baseball fans.

With backing from an impatient investor, J.B., Aash, ornery retired scout Ray (Alan Arkin), and ornery USC pitching coach Tom House (Bill Paxton) are given one year to recruit two players and get them in shape for a major-league tryout. This absurd timeline begins to look impossible when the Americans arrive in India, which moves at its own gridlocked pace, and discover finding anyone who can throw at professional velocity is tougher than they expected. When J.B. comes back with two prospects, Dinesh Patel (Madhur Mittal) and Rinku Singh (Suraj Sharma), and energetic intern/translator Amit (Pitobash Tripathy), he faces still more challenges getting them to adapt to a new culture and the pressures of learning the game.

Here’s how the cultural exchange works in Million Dollar Arm: India gets a reality-TV-style competition that ends, in the best-case scenario, with two kids cast into the uncertainty of the major-league farm system, half a world away from home. The Americans get their faltering business revived, and J.B. comes to understand the importance of family from his young charges. If it weren’t already clear enough that this inspirational narrative serves him more than them, there’s actually a scene where Dinesh and Rinku serve J.B. a romantic dinner. Other than pining for home on occasion, the Indian athletes are simpletons whose innocence and decency cover up a lack of any interior life—shades of Michael Oher in The Blind Side—while J.B.’s story is the one with the true heartwarming arc.

The only splash of cold water comes from Lake Bell as J.B.’s bohemian tenant, who pops his bubble of self-importance (and the film’s) whenever she gets the opportunity. Bell has a history of being a redeeming facet in bad movies—hello, Over Her Dead Body—and her chemistry with Hamm, who gives his slickster all the dimension he can, offers a nice relief from the broad culture comedy and sentimental button-pushing. Their charming opposites-attract dynamic deserves a different movie, perhaps one that doesn’t need the values and long-shot hopes of another nation to prop it up.