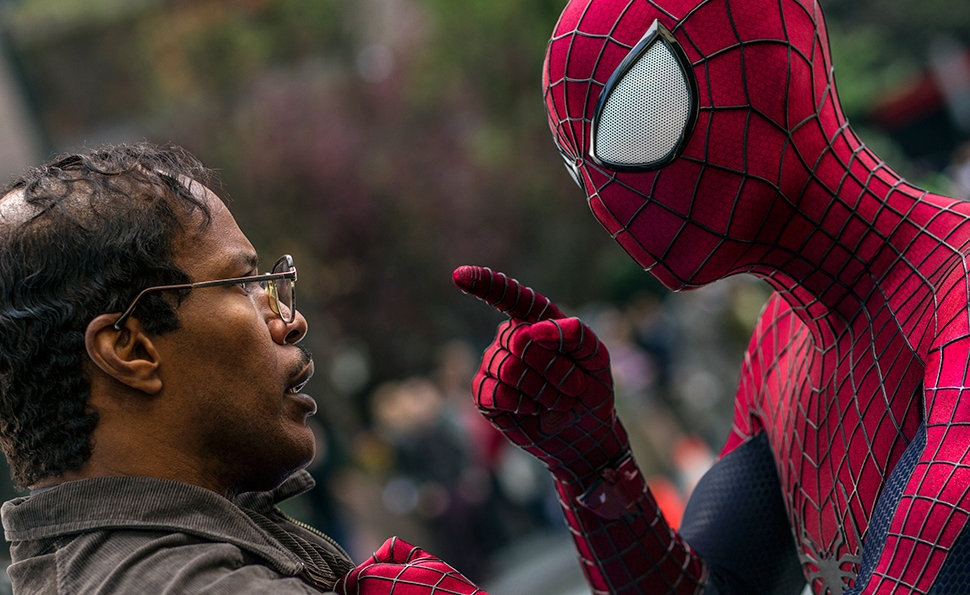 Without getting nostalgic about a time when Marvel licensed its superhero comics to just about anyone—21st Century Film Corporation presents: Captain America, starring J.D. Salinger’s son!—there’s such a thing as going too far in the other direction. A mere five years after Sam Raimi and Tobey Maguire ended their Spider-Man run with a bloated but still distinctive second sequel, Marvel rebooted the franchise with The Amazing Spider-Man, a passable facsimile that retold the same origin story in much the same way, as if the world were entirely populated by Guy Pearce’s character in Memento. A modicum of the wit and soul of the Raimi/Maguire films survived, thanks to the not-badness of Marc Webb’s direction, the not-badness of Andrew Garfield’s Peter Parker, and the pretty-goodness of Emma Stone as Gwen Stacy. But it didn’t leave behind a single indelible image. A complete aversion to risk was the film’s undoing, and it paid dearly by collecting more than three quarters of a billion dollars in worldwide box-office.

With the franchise up and running, Webb, Garfield, and company have the same opportunity that Raimi, Maguire, and company had with their best effort, Spider-Man 2: Now that the introductions are out of the way, they can cut loose a bit. In Spider-Man 2, that meant Alfred Molina’s astonishing hubris and pathos as Doc Ock, an unmasked and exhausted Peter held aloft by NYC subway passengers, and the “Raindrops Keep Falling On My Head” montage. In The Amazing Spider-Man 2, that means another not-bad adventure that introduces a couple of new villains, glosses over Peter’s ambivalence about the superhero job, goes full-emo on the romance, and again does little to put much distance between itself and its predecessor. It’s as conservative as moviemaking gets.

Picking up right where The Amazing Spider-Man left off—assuming anyone can remember where that was, exactly—the sequel has Peter (Garfield) nearly missing his graduation ceremony due to life-saving obligations. His lack of reliability frustrates his valedictorian girlfriend Gwen (Stone), but Peter’s concerns about her safety are what undoes their relationship, at least temporarily. Meanwhile, Spider-Man has work to do, despite the city’s love/hate relationship with the masked vigilante. His biggest foe is electrical engineer Max Dillon (Jamie Foxx), a bitter loner who’s reborn as Electro after an industrial accident transforms him into a hulking power transformer. He also has to deal with his moody friend Harry Osborn (Dane DeHaan), whose inheritance of the mighty Oscorp Industries gives him access to its most dangerous secrets.

Garfield seems inclined to have more fun than Maguire in the role, with a pleasing tendency to mumble a quip-filled running commentary to himself, and offer a few lines to his foes when he has the opportunity. But the burdens of superherodom put Peter in his place: Electro and Harry are all business, details of his father’s subversive activities haunt him (dad is played by Campbell Scott), and his lighter moments with Gwen are swamped by relentless foreshadowing, to say nothing of Denis Leary’s glowering mug as her late, disapproving father. None of these elements are handled badly—in fact, the love story and Spidey’s conflicts with Electro and Harry reach a satisfying crescendo against the New York skyline at night. The trouble is that none of it is handled with much inspiration, either. Each Happy Meal comes with the same cheap plastic figurine.

A month ago, Captain America: The Winter Soldier proved it was possible to link up with the Marvel Cinematic Universe while still packing a film with wit, verve, and smart allusions to 1970s paranoid thrillers and the drone politics of the times. The Amazing Spider-Man 2 has no such obligation to the MCU, yet it’s more inclined to stick to the straight and narrow, like it’s angling for a spot on Sony’s Employee Of The Month plaque. The silver lining: Like its predecessor, The Amazing Spider-Man 2 offers its successor another fresh start, since no one will remember what happened in this movie, either.