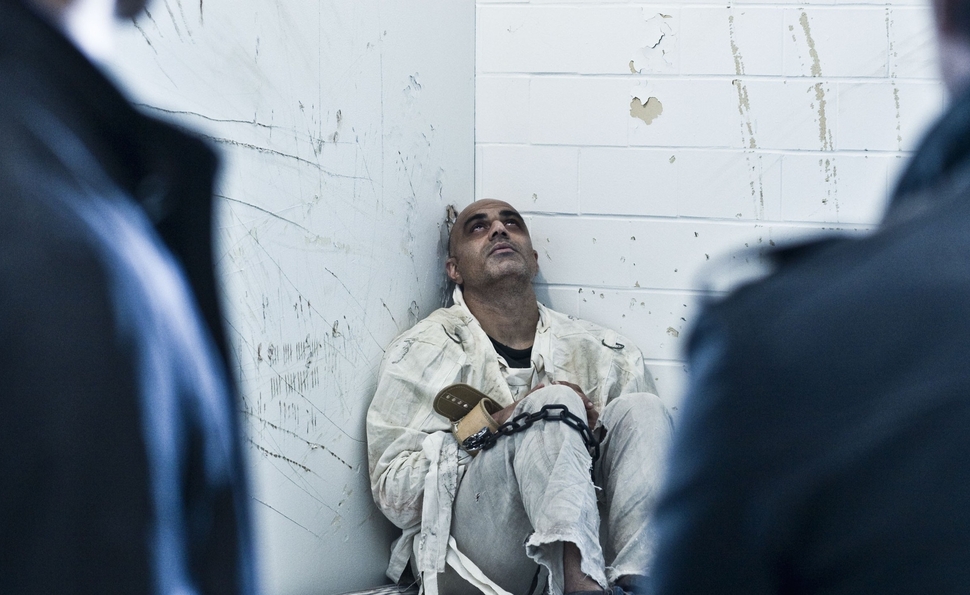 A: Many things, my child. In increasing order of relevance…

2) A globetrotting adventure taking viewers on a whirlwind journey from Ann Arbor, Michigan to Detroit to Dearborn to Commerce.

3) Merely the first installment, the end credits warn, in something called “The Exxodus (sic) Continuum,” which does not appear to be an extant comic book, YA literature series, videogame franchise, or Jane Austen deep cut. And yet the movie walks and talks like a translation of an already-successful property. It features many, many flashback sequences, it’s mostly incomprehensible, and the credits presume franchisedom by including not one, not two, but three Marvel-movie-style epilogues teasing future installments, plus a title card promising “THE JINN WILL RETURN.” (In The Jinn Who Loved Me, presumably.)

That is to say, one Ajmal Zaheer Ahmad wrote, directed, and edited the film. He’s also specifically singled out for designing its opening title sequence (which depicts the pulse-quickening unrolling of a mystical scroll that never figures into the story in any way), and for creating The Firebreather—which, careful study of the credits reveals, actually isn’t one of the film’s many computer-animated flame creatures, but a special and indeed bitchin’ Chevy Camaro that appears in a few scenes. (Ahmad’s camera ogles the rain-slicked hood of the car with a prurience it never gives the film’s good-looking but hopelessly bland male and female leads, Dominic Rains and Serinda Swan.) Finally, Ahmad gets a credit for providing the voice of the Jinn—one specimen of an ancient race of beasties—when it speaks, mostly unintelligibly, in English. Another actor performs its Urdu dialogue because what, does Ahmad have to do everything around here?

Anyway, The Exxodus (sic) Continuum, Episode I—Jinn opens in 1901, in a part of India that looks remarkably like the lush forests of Ann Arbor. A bearded, soulful-eyed spiritual warrior of some kind (Rains) approaches a slumbering demon and orders it to “release the girl.” (Linda Blair is never seen, nor is any other girl.) The beast, which is technically a Jinn, gets angry and pledges to murder all the poor guy’s offspring. Cut to “Ann Arbor, Michigan—Present Day,” where prosperous automotive designer Shawn (Rains again) and his beautiful wife Jasmine (Swan) receive a mysterious VHS tape via mysterious courier. (“But it’s not my birthday!” Shawn exclaims.) It bears a warning from a man claiming to be Shawn’s father, and saying mysterious things will start to happen, so Shawn should… expect mysterious things. The message repeats the phrase “If you’re watching this tape” a bizarrely high number of times, given how little useful, actionable intelligence it offers about the coming threat. (E.g., none.)

Faster than you can mispronounce “M. Night Shyamalan,” Shawn and Jasmine are mildly discomfited by unholy acts of unspeakable vandalism: Overturned chairs! Scattered papers! Windows that were closed before, but are now open. The film is sort of ambiguous about whether this demonic force has un-alphabetized the couple’s DVD collection.

Eventually, Jasmine is abducted, and Shawn must confer with a crazy guy in one of the most airy, spacious, unconvincing insane asylums ever put onscreen. (It looks like an Apple store.) Then, something something about a prophecy, and familiar mentor-pupil stuff plucked from The Empire Strikes Back and The Matrix. Punctuating these clichéd beats come many, many aerial shots of cosmopolitan Ann Arbor, accompanied by expository dialogue that was obviously looped in after shooting wrapped. Fidgety viewers will surely wish to fast-forward to the part where Shawn must outrace an evil cloud of black taffeta pixels in the Firebreather. Confusingly, he both coos to the car (“Show me something, baby!”) and taunts the cloud (“Come get me!”) in this fast and furious scene.

The movie acts like it’s a big reveal when Shawn eventually learns what voiceover narration explained in the opening 30 seconds: The Jinn were a race of beings who predated humankind, and have come to resent our dominion over the Earth. “They’re jealous,” huffs a priest played by William Atherton, who ought to know, since he was the guy who shut down the nuclear-powered ghost cage in Ghostbusters 30 years ago, unleashing a horde of prison-hardened poltergeists upon Manhattan. “Jealous of our imagination. Of our incredible ability to create.”

(“Well, this film notwithstanding,” his bored delivery seems to add.)

The picture also stars—well, “stars”—Ray Park, whose New York Times obituary will note he played Darth Maul, the taciturn Sith Lord who ended Liam Neeson’s long career as a Jedi Knight in the only exciting part of The Phantom Menace. Though Park is credited as Jinn’s Fight Arranger, the film—wherein ancient supernatural beings can be outrun by Camaros, and also body-slammed by puny albeit very determined humans—isn’t smart enough to capitalize effectively on Park’s genuinely astonishing martial-arts prowess. His sole big fight scene comes when his character, Gabriel, and Shawn must escape that tasteful, modernist asylum. “Don’t turn back, no matter what you hear,” Gabriel says, before his eyes start glowing and he embarks on a slow-mo color-guard routine, using his iridescent blue sword to make a bunch of ghouls dissolve into various Final Cut Pro effects, while a midtempo power ballad howls away on the soundtrack.

The scene has an uproarious tag when Shawn realizes he can’t escape the advancing horde of ghouls because he’s left the keys to the Firebreather at the check-in desk of the insane asylum. (Which has a incredibly lax visitors’ policy, but is tougher than the TSA when it comes to separating keys from their owners.) Park closes his eyes and uses his Disney-will-probably-object-if-we-call-them-Jedi-powers to levitate the keyring off a hook on the wall and through the asylum’s stone façade, and across the beautifully manicured quad back into Shawn’s hand. THE FIREBREATHER’S KEYS WILL RETURN.