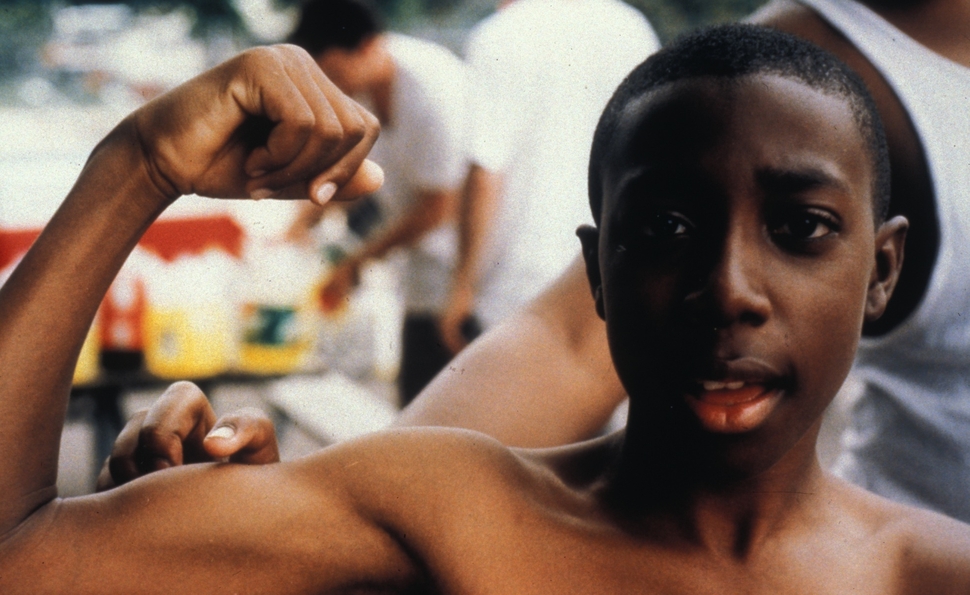 After a prelude in a closet, in which a heartsick boy asks his girl for one last kiss, David Gordon Green’s 2000 debut feature, George Washington, suddenly opens up with a slow-motion shot of four kids rounding a corner in a post-industrial North Carolina town. There’s a swelling of orchestral ambience on the soundtrack, and streaks of sunlight shoot across Tim Orr’s widescreen frame. The shot belongs on any shortlist of great independent moments from the early 21st century, not just for its heartrending beauty, or for its announcement of a major new director, but for its promise of taking American indies away from urban postgrad chatter and into a more poetic mode. It’s telling that the Sundance Film Festival famously rejected George Washington: At a time when the festival had become an annual feeding frenzy for Hollywood boutique labels in search of the affably offbeat, it completely broke the mold.

With the sun-dappled rapture of Orr’s imagery and its lyrical voiceover from an awed naif, George Washington unmistakably recalls the work of Terrence Malick, and Green doesn’t shrink from the comparison: On George Washington’s commentary track, included on the Blu-ray/DVD reissue of a previously available Criterion edition, Green quotes an entire passage of second-person narration from The Thin Red Line that affected him deeply. Though other 1970s influences are also apparent—the 1969 short “A Day With The Boys,” directed by character actor Clu Gulager, also included on the disc, is a key source for the film’s kids-at-play vibe—George Washington suggests what Malick’s Days Of Heaven would have been like if it just followed the girl and never left the city. When Richard Gere’s character loses his job early in Days Of Heaven, he hops a train west with other laborers looking for opportunity, but the children who scavenge the city in Green’s film have to stay in place. The coal-fired hell-pit of the kind where Gere worked at the beginning of Days Of Heaven doesn’t exist anymore, so the best the kids can manage is to live in the present and frolic in the ruins.

Yet one of this multi-racial group is looking ahead: George (Donald Holden), a 13-year-old who imagines a heroic destiny for himself, and quietly works to make it happen, despite a skull condition that requires him to wear a protective helmet at all times. George and his loose cadre of pals—nerdy Buddy (Curtis Cotton III) and the alluring Nasia (Candace Evanofski), who have just broken up; the gentle giant Vernon (Damian Jewan Lee) and the unaffected Sonya (Rachael Handy), the one white girl in the group—pass the time wandering the streets, train-yards, and abandoned buildings of their dead-end town, which Green renders with a slice-of-life looseness.

In the only plot point in this largely plotless film, Buddy hits his head and dies while horse-playing with some of the others in a vacant amusement-park bathroom. Nasia isn’t there to witness it, but the tragedy affects the others deeply, and changes their essential chemistry as friends and as individuals. Vernon bears it heavier than anyone, sacked by immense feelings of guilt and shame, while Sonya wonders what her lack of emotion says about who she is. Then there’s George, who seeks redemption—and in one stirring moment, finds it—by acting as a real-life superhero, with a wrestling onesie for a costume and a bed-sheet for a cape. He wants to be president. Nasia wants him to live forever.

Despite their tragic circumstances—crushing poverty and almost post-apocalyptic hopelessness pervades before anything happens to Buddy—George Washington couldn’t be described as a dirge. Even then, years before he started making straight-up Hollywood comedies like Pineapple Express, Green had a sense of humor and play that buoys the film. This isn’t like Luis Buñuel’s Los Olvidados, where lost children are reduced to thievery and violence; it’s about innocents whose spirits are altered but not extinguished by the sad world around them. The ambition implied by the title isn’t meant to be bitterly ironic, at least not entirely—George’s character alone represents a shred of hope.

Nothing Green has made since has equaled George Washington, but that doesn’t diminish the film’s lasting achievement, which was bringing a sense of poetic grandeur to an indie movement that was scaling down. With a little more than $40,000, Green, Orr, and their collaborators were able to bring beauty and scale to a shoestring production, and pick up the 1970s filmmaking aesthetic that major studios more or less abandoned after Heaven’s Gate. At the same time, Green offered a warmer alternative to the improvised slices-of-life brought by Harmony Korine and Larry Clark’s Kids and Korine’s Gummo, whose provocations inched into grotesquerie. George Washington is a mood piece first, and its triumph is in bottling up the intense feeling of early adolescence, and watching how tragedy transforms it.

Green, Orr, and actor Paul Schneider—a University Of North Carolina School Of The Arts classmate of Green’s, who took a larger role in Green’s follow-up, All The Real Girls—offer a casual commentary track that gets into  the film’s poetic style and the unique circumstances of its making. Two of Green’s student shorts, 1997’s “Pleasant Grove” and 1998’s “Physical Pinball,” are basically George Washington in embryonic form, with the former experimenting with Malick-ian voiceover and by-the-tracks ambience, and the latter introducing two young, non-professional actors who were later cast in the film. There’s also a 15-minute Charlie Rose interview that shows the then-25-year-old director’s deftness in handling Charlie Rose questions.