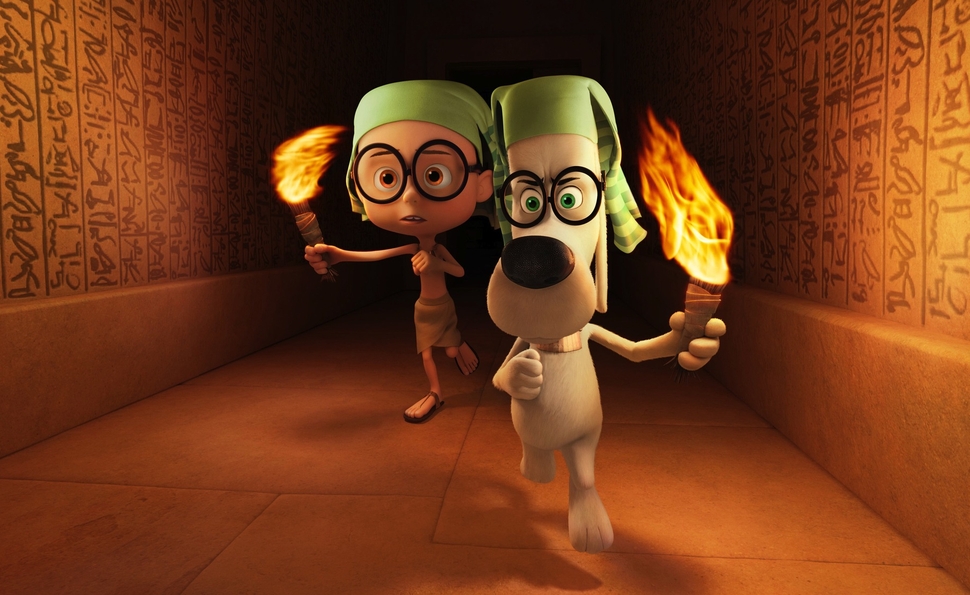 The 2014 CGI animated film Mr. Peabody & Sherman starts precisely where its source-material cartoon started back in 1959: with a camera zooming in to find genius dog Mr. Peabody doing yoga and glibly breaking the fourth wall to brag about his history of achievement. As he informs the audience, he’s effortlessly succeeded at everything imaginable, from winning the Nobel Prize to earning multiple Olympic gold medals to inventing Zumba. But the smug, facetious opening of the original “Peabody’s Improbable History” cartoons, part of the Rocky And His Friends animated variety show that also gave the world Rocky and Bullwinkle and Dudley Do-Right, doesn’t fit well with a film that’s trying to hit the standard marks for a modern animated-feature success. It’s good to see this update respecting its classic cartoon forebear, but the attempt to match the old show’s dry, smirking tone with a fuller, more rounded emotional palette comes across as endlessly calculated, and more facile than fun.

Like the 1959 version, the 2014 animated feature focuses on the time-traveling adventures of Mr. Peabody (now voiced by Modern Family’s Ty Burrell) and his adopted 7-year-old boy Sherman (Max Charles), whom he dotes on with a plummy, controlling sort of fussiness. Part of that fussiness extends to wanting the best education possible for Sherman, so he builds a flying orb called the WABAC Machine to traverse history, so he can take Sherman on field trips to study the past. But once Sherman starts school, his superior knowledge of history instantly earns him the enmity of hateful bully Penny Peterson (Ariel Winter). When she mercilessly abuses him, equally hateful, bullying school counselor Ms. Grunion (Allison Janney) blames the incident on Mr. Peabody, announcing that a dog should never have been allowed to adopt a child in the first place. With Ms. Grunion looking for any excuse to revoke Mr. Peabody’s court-granted parental rights, he tries to set things right by throwing a dinner party for Penny and her dippy parents (Stephen Colbert and Leslie Mann). Then Sherman tries to impress Penny with the WABAC Machine, spawning a series of crises set in ancient Egypt, the Italian Renaissance, the Trojan War, and more.

Since Pixar set the standard model for animated feature blockbusters, other studios have been slavishly following a perceived Pixar story formula: strong family bonds, check; family disrupted by events, check; shared quest during which those torn bonds can be mended, check, and so forth. Sometimes (as with DreamWorks’ superior How To Train Your Dragon) other studios have surpassed the artificiality of formula, and found the point where an organic story, told for its own sake, includes the right elements. Mr. Peabody & Sherman’s biggest flaw is that it never stops feeling like a checklist with a story slapped around it. When Sherman says, “I love you, Mr. Peabody,” and the dog stiffly answers, “I have a deep regard for you as well, Sherman,” it’s the kind of moment that only exists to set up a payoff later on. Other story setups are equally clumsy and obvious, and often feel like they’re missing essential connective tissue: Sherman’s sudden crush on the vain, snide, abusive Penny comes out of nowhere, for instance, and it’s much harder to buy than a time-traveling, talking dog.

Mr. Peabody & Sherman mostly hits the good-enough-for-undiscriminating-kids benchmarks: It’s antic and colorful, with a lot of 3-D-friendly zooms through hyperspace and sewer tunnels, and a wearying but at least creative number of bodily function jokes. It’s surprising just how much time the camera spends staring at the Trojan Horse’s rectum, but at least it doesn’t fart. And older audiences familiar with the various incarnations of Rocky and Bullwinkle can enjoy all the callbacks, from Mr. Peabody’s silly historical puns (“You can’t have your cake and edict too!”) to the cartoon janitor who sweeps up after the action at the end. Mr. Peabody at least has the advantage of being an unusual character—not because he’s a genius dog, but because he’s a smart, engaged parent who wants what’s best for his son, and is still struggling to understand that his brilliance can’t solve all Sherman’s problems.

But the whole film is still considerably dumber and clumsier than it needs to be. The Mr. Peabody/Sherman relationship hits the predictable marks of tension and resolution, but it all feels as mechanical and unearned as their early bonding montage, shamelessly set to John Lennon’s “Beautiful Boy.” Most of their misunderstandings stem from the usual dull trope of adults being impossibly blind to reality, until it’s narratively convenient for them to wise up. The prospect of the two needing each other, but being separated by uncaring bureaucrats, might be poignant, if it weren’t handled so loudly and brainlessly, with Ms. Grunion as a shrieking, violent harpy who’s clearly overstepping her legal capacities. (Then again, all the film’s women are either squawking monsters or vapid set-dressing; Penny starts out as the former, and is “redeemed” by becoming the latter.)

And the film’s take on time-travel lacks the cleverness of the original cartoon; instead of finding history full of neurotic but interesting characters, it finds a lengthy series of Bill & Ted’s Excellent Adventure-style amiable dolts, from Marie Antoinette (Lauri Fraser) as a fat cake fanatic to Agamemnon (Patrick Warburton) as a dim-bulb armpit-sniffer. Each new encounter is just a path to another chase scene, ultimately topped by another predictable check on the list of moments that are meant to be heartwarming. The film respects its cartoon roots, but never its audience.