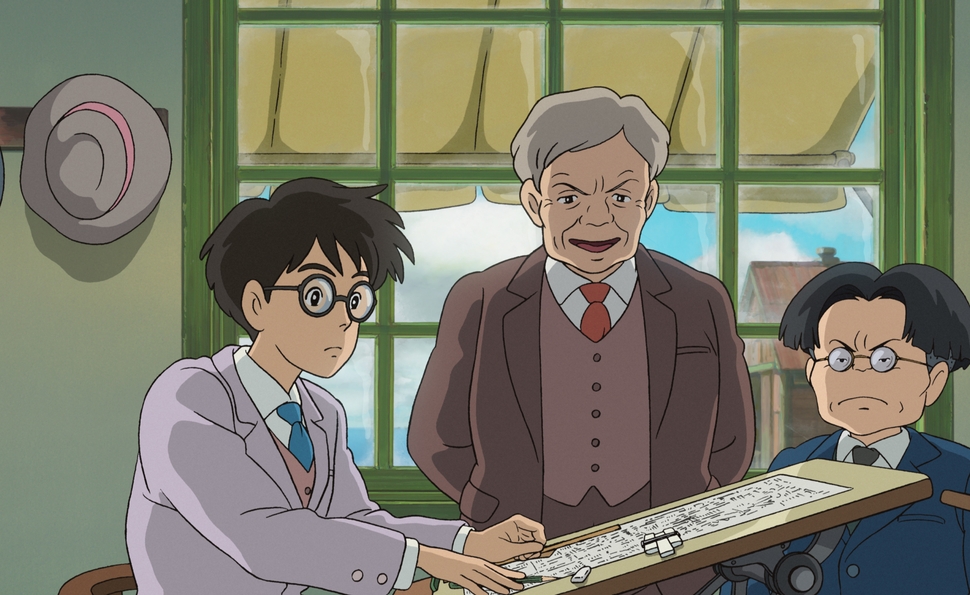 It’s probably a good thing for the world that Japanese writer-director Hayao Miyazaki is a dedicated pacifist and humanitarian. His joyous animated films have a powerful knack for defanging uncomfortable ideas and situations: His rich designs and honest, upbeat characters bring an appealing wonder even to depression and self-doubt (in Kiki’s Delivery Service and Howl’s Moving Castle) sheer terror (particularly in Spirited Away), and destructive rage (Nausicaä Of The Valley Of The Wind; Princess Mononoke). The Wind Rises, his newest film—and given his recent re-retirement and advanced age, probably his last—tackles his most uncomfortable and adult subject matter to date. Various critics have complained that it glorifies the enslavement of Korean laborers, celebrates Japanese military aggression (or alternately, betrays Japan by demonizing the country’s strength), glosses over the moral responsibility of weapon designers, trivializes a lethal tuberculosis epidemic, and promotes smoking in young people. Some of these hefty claims might even be true, but regardless, Miyazaki tackles his themes with such an effervescent, lighthearted touch that he makes even the development of lethal weaponry seem swooningly romantic. Just think what harm he could get up to if he actually set out to make pro-military propaganda.

The Wind Rises focuses on Japanese aviation engineer Jiro Horikoshi, whose revolutionary Zero fighter plane dominated early World War II aerial combat. Miyazaki’s film isn’t much of a biopic; it covers a narrow range of Horikoshi’s childhood and his design career at Mitsubishi, and it mixes in biographical details from the life and work of Japanese author Tatsuo Hori. But the film does methodically follow Horikoshi for years, as he studies aircraft, visits Germany to examine groundbreaking new bomber designs, and witnesses or drives the technological advances that eventually make the Zero possible. Miyazaki veers between focusing on pragmatic design—Horikoshi (voiced by Joseph Gordon-Levitt in Disney’s English dub) has significant, unhurried conversations with his colleague Hondo (John Krasinski) about strut curvature and flush rivets—and the colorful visions that represent Horikoshi’s idealized view of planes. In Horikoshi’s dreams, the Italian aircraft designer Giovanni Caproni appears to him as an expansive, paternal figure who shows off wondrous designs and waxes poetic about their profession: “Airplanes are beautiful dreams. Engineers turn dreams into reality.”

Miyazaki has always inserted his personal love of flight into his films, which prominently feature airborne creatures or inventive airships: the floating island of Castle In The Sky, the porcine fighter ace of Porco Rosso, the sometimes-winged wizard of Howl’s Moving Castle, and many more. The Wind Rises is his most personal film to date. While it’s nominally his first historical piece after a long career in pure fantasy, he treats Horikoshi more like a mouthpiece than a historical figure. Through him, Miyazaki can express, at length, his own longstanding amazement at the aesthetics of flying machines, and his disdain at the uses military minds find for them. Horikoshi may be a kindred spirit, but Miyazaki goes beyond romanticizing him, and well into making him more symbol than man.

In the process, Miyazaki skimps on the chance to make as much of the conflict between creativity and actuality as he might. In his version of the story, Horikoshi’s work is always a compromise. He’s well aware that his designs aren’t abstractions, and that the Japanese Navy is funding Mitsubishi’s projects in the hopes of building better fighters and bombers for the upcoming war effort. He shrugs this off with a disengaged casualness, but that doesn’t make the destruction he causes any less real. Miyazaki has said in interviews that he doesn’t see a point in debating Horikoshi’s culpability for the destruction his designs caused, but given that, it’s baffling how The Wind Rises raises the issue, and ends just after a scene where Horikoshi dreams of burning villages, and the shattered wreckages of his kamikaze fighters. Miyazaki acknowledges the issue without significantly grappling with it, which in many ways is worse than never acknowledging it at all.

The Wind Rises’ minimal moral component doesn’t get in the way of Miyazaki’s always-compelling imagery. Horikoshi’s dream sequences are a little too on-the-nose, particularly when Caproni (Stanley Tucci) first claims that Horikoshi is in his dream, rather than the other way around, then chortles that they have a shared dream, which he obviously means in more than one way. But these sequences give Miyazaki an opportunity to put his artistic and directorial skills on the line. As always, he packs the screen with lush landscapes and verdant colors. He adds odd, appealing touches, like a sound palette made up of human verbalizations, such that the sounds of a prop plane’s rotor or a rumbling earthquake are obviously a series of vocal burrs and yips. He remains unstinting in his attention to finely wrought detail. And he outdoes himself with evocative, breathtaking images of planes coming apart in flight, or soaring in regimented fleets. (It seems significant that when Horikoshi dreams or fantasizes about a single plane, it’s usually because he’s imagining it disintegrating in midair, due to some design flaw he hasn’t yet rectified; one of the film’s most evocative sequences has him sitting at his drafting table with an imaginary wind blowing furiously around him as he mentally plummets to earth along with a failed design, all while working out the math that will fix the problem. At the same time, he periodically dreams of planes in profusion, soaring in peaceful tandem, all bugs worked out.)

But while the film’s individual moments and images are often fantastically wrought, the story elements often seem as unintegrated as the moral exegesis. In particular, Horikoshi’s tragic romance with Nahoko (Emily Blunt), a young woman afflicted with tuberculosis, never fully fits into the narrative, with good reason—it’s borrowed from Hori’s life story rather than Horikoshi’s, and it’s achingly sentimental in a way that rubs against the grain of the film’s more practical elements. Horikoshi is a typical Miyazaki hero—driven, open-hearted, equanimous in failure, and quietly happy in success—and Miyazaki never fully connects the man’s deep-seated inner calm with the soapy melodrama of his relationship.

The Wind Rises might play better if Miyazaki had explored the same idea through a pure fantasy story; the real-life deaths wouldn’t weigh down his spectacular aircraft, and the disparate elements would feel less forced into place. It’s also more likely that Miyazaki wouldn’t have felt compelled to shoehorn so many clashing or unfulfilled ideas into a film less beholden to two real-life stories. As it is, The Wind Rises often soars in individual scenes. But as a whole, it raises more questions than it answers, about why Miyazaki chose to tell this particular historical story, and then strayed so far from it; about why he consciously raises so many thorny issues, then gives them such short shrift. Given his considerable ability to make every project emotionally appealing and visually sumptuous, he accomplishes more with this flawed project than most would. But if this is his swan song, it’s a pity it sounds so many discordant notes.