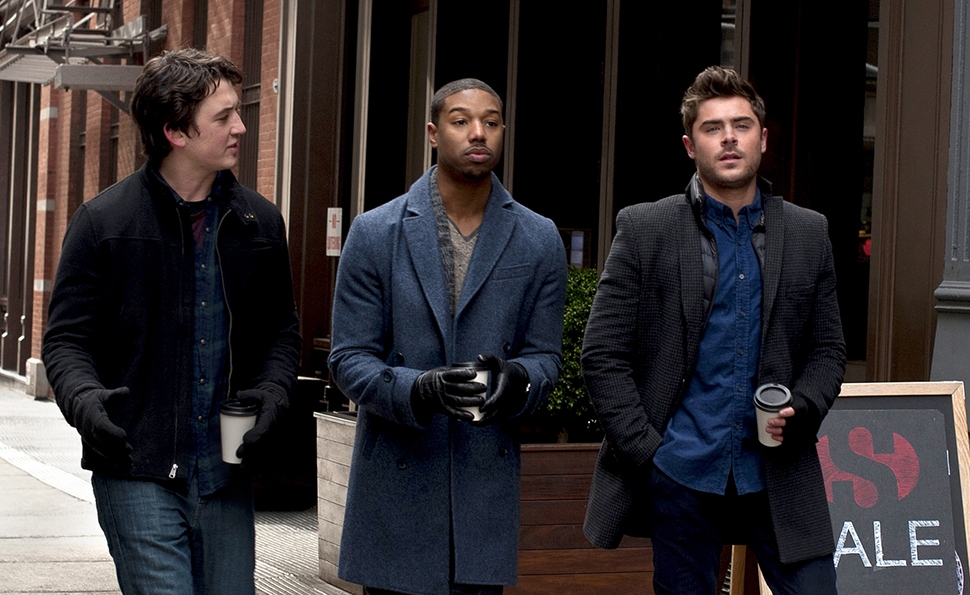 Heading up the dick-swinging trio is Jason (Zac Efron), a book-cover designer and too-tight-T-shirt aficionado prone to making up ostensibly clever jargon to encompass his philosophy of women. He maintains a “roster” of undiscriminating ladies to call upon for hook-ups, then moves them out of the rotation as soon as they give him “The so…” as in, “So… where is this going?” Jason’s cavalier attitude toward women and life in general makes him the apparent alpha over his two more charismatic, likable friends, co-worker/clown Daniel (Miles Teller) and straitlaced doctor Mikey (Michael B. Jordan). Mikey’s separation from his wife, whom he married young in an effort to “check all the boxes” of adulthood, prompts both the central agreement and a spate of single-male bonding centered primarily on dick humor, toilet humor, and the intersection thereof—embodied in a sequence where Jason and Daniel talk on the phone while lying across their toilets, asses waving in the breeze as they attempt to urinate through the lingering effects of recreational Viagra.

Regardless of how subjectively funny such broad, phallocentric humor may be, it’s jarring to see the guys’ caddish behavior sharing space with the type of grand romantic gestures that characterize romantic comedies. (This disconnect is perfectly symbolized in one late-film scene where a character runs to tell a women he loves her, and is immediately hit by a cab.) Such moments of supposed sincerity may be intended as redemptive, but in the context of characters who are likely to, say, arrive at a “dress-up party” wearing a “Rock Out With Your Cock Out” costume, strap-on dildo and all—and then refuse to change or leave—they become apparent for what they are: acts of stupidity masquerading as romance. 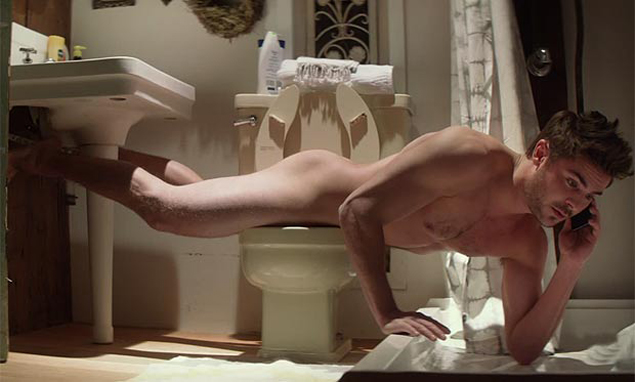 Admittedly, that all could make for an interesting, or at least palatable, tale of man-child redemption, if it weren’t saddled to a character as unlikable as Jason. Efron doesn’t have the charisma or comedic chops to make his character’s idiocy seem even a little charming, which tanks any promise in his romance with artsy Midwestern sweetheart Ellie (Imogen Poots), making their courtship seem contrived at best, offensive at worst. (Their first date involves him mistaking her for a hooker.) His two pals come off better, mainly by comparison; it’s telling that Daniel and Mikey are at their most engaging and human-seeming when they aren’t with Jason. Teller gives Daniel a more polished version of the smarmy charisma he displayed in The Spectacular Now, and while that often tips over into obnoxiousness, Daniel’s tentative steps into a real relationship with his female best friend (Mackenzie Davis) at least have some recognizably human emotional stakes. Jordan is the only one asked to do any real heavy lifting with the cuckolded, confused Mikey, and he predictably delivers, in a storyline that’s loudly telegraphed, yet boring.

Like its main character, That Awkward Moment can’t commit to anything, and thinks it’s much smarter than it is. First-time writer-director Tom Gormican fills his script with jabs at romantic convention, but his story doesn’t attempt to subvert those conventions in any meaningful way. All the crude humor and self-aware gags in the Judd Apatow playbook can’t obscure the film’s dutiful trudge from Rom-Com Plot Point A to Rom-Com Plot Point B, and it culminates in a laughable final romantic gesture that borders on self-parody. That Awkward Moment strains in its obvious attempt to be the ultimate cross-demographic date-night movie, but its attempts to have it both ways—snide humor and naked sentiment—cancel each other out, resulting in a bland nothing of a film unlikely to offend or delight anyone.