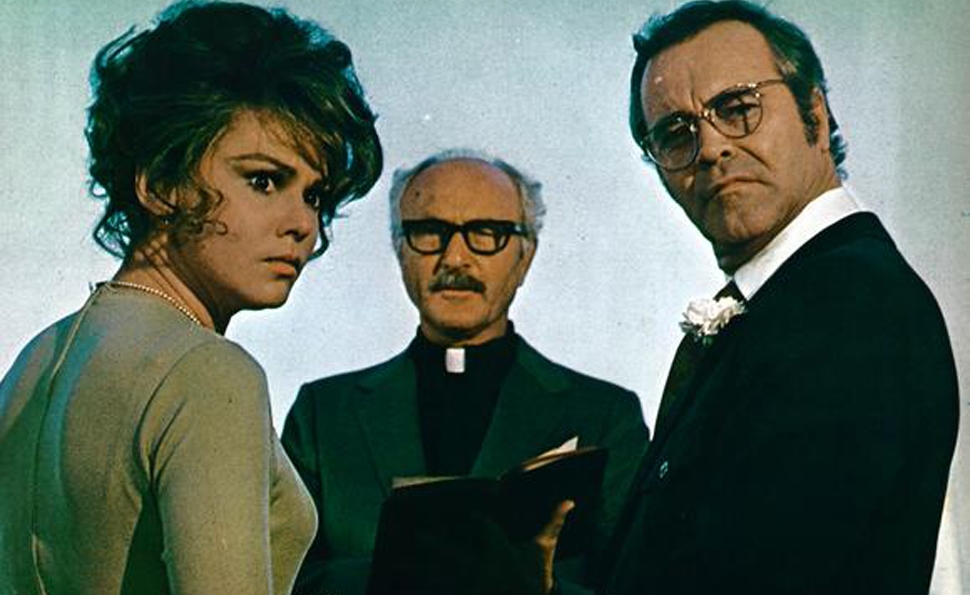 The War Between Men And Women

There’s an entire subgenre of high-flown films that sneak biography into fiction by turning authors into the protagonists in narratives based on their work: Wim Wenders’ Hammett, Steven Soderbergh’s Kafka, and David Cronenberg’s Naked Lunch are the most daring, but the technique reaches back at least as far as 1952’s Danny Kaye vehicle Hans Christian Andersen, and extends to the recent flops The Raven and The Rum Diary. Melville Shavelson’s charming 1972 feature The War Between Men And Women follows the template, but to different ends than most examples of the breed. It’s only fitting that Hammett is a noir mystery, Kafka is a Kafka-esque thriller, Hans Christian Andersen is a fairy tale, The Raven is a horror-mystery, and so on, but all these films are dramas at the core, exploring the authors’ identities by looking at their work from the inside. The War Between Men And Women, on the other hand, is a crypto-profile of one of America’s greatest humorists, and while it comes with a deep core of grief, it’s fundamentally a broad comedy.

In 1969, former Bob Hope gag writer Melville Shavelson created and scripted an Emmy-winning prime-time comedy series called My World And Welcome To It, based on James Thurber’s prose and popular New Yorker cartoons, and named after his 1942 biography. The series incorporated animation based on Thurber’s drawings, and live-action skits based on his writing, but was primarily a narrative about a Thurber-esque writer with a snappish outlook on life. The TV series lasted one season, and after it was canceled, Shavelson took the same idea to the big screen, again with a protagonist based on Thurber, and again presenting his work with a little context, but virtually no filter.

Jack Lemmon stars as Peter Wilson, a successful but bitter, intensely misanthropic author with a W.C. Fields outlook on children and a tendency to bluff his way through life with one-liners and not-so-clever tricks. Blind in one eye after a childhood accident, and losing sight in the other (exactly like Thurber), he still tries to fake his way through eye exams by memorizing the chart in advance, as if convincing one ophthalmologist that he can see will somehow mitigate his degenerative ocular disorder. After a particularly dispiriting checkup, during which he learns he can succumb to surgery or go blind, he meets divorced mother of three Theresa Kozlenko (Barbara Harris) in the ophthalmologist’s office, literally tripping over her while they’re both visually impaired. They quickly begin a screwball relationship heavy on whipcrack banter and mutual disapproval; when they add lust and then affection to the mix, Theresa’s middle daughter, Linda (Lisa Gerritsen) takes over the disapproval.

Thurber’s single best-known work is the short story “The Secret Life Of Walter Mitty,” about a meek man who floats through life on a cloud of wild daydreams. Shavelson and his co-writer, Barney Miller creator Danny Arnold, inject a heady level of Walter Mitty fantasy into The War Between Men And Women, as Peter recasts the world as one of his absurdist cartoons, or fantasizes rhapsodically about the triple child-murder that would make Theresa his perfect woman. The humor is surreal as well as screwball: Peter talks directly to the camera, taking wry digs at his surroundings with the attitude that only the audience can really appreciate him—or possibly that only the audience will let him sneer at the world to his heart’s content without talking back. The film also borrows Thurber’s profoundly acerbic aesthetic, frequently hitting squirm-inducing levels of causticity: Cringing from a yapping dog, and ordered not to kick at her because she’s pregnant, Peter snaps, “It couldn’t have been love; she must have been raped!”

But one of the many things that keeps The War Between Men And Women from descending into poisonous self-satisfaction is the way the world constantly resists Peter’s attitude. Theresa, her ex-husband Stephen (Jason Robards), his agent, Linda—all of them capably buck back against Peter’s destructive humor. Gerritsen is a particular wonder: Her anxious, stuttering, awkward pre-teen is as mannered and artificial as any comic-trope character, but the young actor brings across all the frustration, helplessness, and bottomless contempt for the world that comes with adolescence, and Shavelson and Arnold give her character as much depth as Peter’s. Linda and Peter are fundamentally at odds—she misses her father and has no use for the mean, snide stranger who’s captivated her mother, while he has no idea how to relate to kids, or to any female he can’t either seduce or dismiss with snark—but the film finds both the funny side and the tragic side of their conflict.

Lemmon’s comic timing is as impeccable here as it was in The Apartment, Some Like It Hot, and The Odd Couple, and Harris proves his equal in a role that’s tender and humane without being weak, or vulnerable to his outsized jabs. Together, in the early going, they make the film laugh-out-loud hysterical, as quick-moving and light-footed as the best of the screwballs. But a little heart enters the story as it progresses. In one fantastic sequence, Peter and Stephen drunkenly bond over a wild flight of fantasy where they act out the gender war with the help and hindrance of animated Thurber characters. Later, Peter comes to terms with Linda by writing something for her: Thurber’s gentle, tragic anti-war fable “The Last Flower.” In both cases, Shavelson doesn’t analyze Thurber’s writing so much as present it directly to the audience, and let it weave its own magic.

There’s another common subgenre in modern film: The comedy about an aging man-child who realizes he needs to grow up, but spends most of a film gleefully misbehaving, while a more mature woman scolds him and waits for him, until he abruptly comes around in the end. The War Between Men And Women is the template for that genre. But what differentiates it from the Knocked Ups of the world is how uproarious the funny parts get, in part because they’re so daringly nasty, and how authentic and well-earned the ending seems by comparison. Thurber can take some of the credit, but perfect casting and smart writing do the rest. The title comes from Thurber’s work, but the story isn’t really about a gender war: It’s about the war against despair and humanity’s most selfish and destructive impulses, and how men and women fight it together. That war is hell, but in these hands, it’s a hilarious hell.