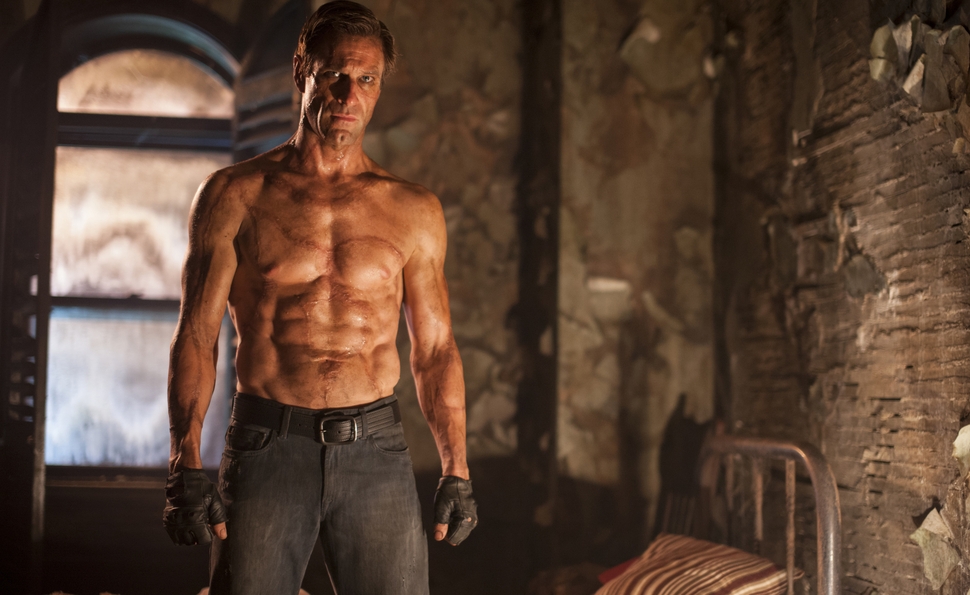 I, Frankenstein looks suspiciously like it was conceived more as a ready-made franchise property than as a strong individual story. The credits bill director Stuart Beattie as having written the script based on a graphic novel by Kevin Grevioux, a process that sometimes brings a strong indie-comics voice into the cinematic arena. But the truth is more complicated: Grevioux sold his story as a screenplay in 2009, illustrating his film pitch with art he’d commissioned to eventually help him sell a graphic-novel spin-off. His graphic novel doesn’t actually exist apart from the free downloadable comic promoting the movie, and some pages since pulled from his imprint’s website. That makes both the story’s origins and its authorship more complicated than the credits let on.

Certainly the film feels like something conceived by Grevioux, who’s also written superhero comics for Marvel and IDW, and originated the story that became the vampires-vs.-werewolves film franchise Underworld. I, Frankenstein has a strong Underworld aesthetic—it’s another muscular, glowering, dark world where two supernatural armies punctuate each act with a big throwdown, backed by complicated yet suspiciously underwritten mythology and a lot of broody angst—but it also has clear fingerprints from Beattie, who collaborated on scripting the Pirates Of The Caribbean series-launcher and G.I. Joe: The Rise Of Cobra. It feels as much like a machine-tooled franchise-starter as those films: a processed product, series-ready and prepped to storm any medium where it might find a foothold and a fandom.

And yet, while it’s nothing new and lacks individualistic touches, it’s still solid trashy fun as an overwrought superhero origin story. I, Frankenstein’s tale takes up where Mary Shelley’s classic novel leaves off, more or less: Mad scientist Victor Frankenstein, having created a living monster from stitched-together corpses, dies while hunting down his creation. Burying Victor in a churchyard, the monster (Aaron Eckhart) informs the audience in a throaty, Christian Bale-as-Batman voiceover, “I thought it was the end, but it was actually just the beginning.” Seconds later, he’s fighting off demons and being accosted by living gargoyles, who morph back and forth from CGI stone beasties to glowering cowled extras from the videogame Assassin’s Creed. As the gargoyle queen Leonore (Miranda Otto) and her lieutenants explain, in one of those let’s-just-get-it-over-with mythology infodumps that so often grace franchise-starters, gargoyles are actually heavenly agents, sent to earth to fight the demons who swarmed the planet when Lucifer fell. When demons’ mortal shells are destroyed, they descend back to hell in a flash of computer-generated pyrotechnics; similarly, dying gargoyles ascend back to heaven in a beam of holy light. I, Frankenstein offers plenty of showy, colorful examples of both kinds of deaths, as the two sides fight their eternal holy war.

Frankenstein’s monster, whom Leonore pointedly dubs “Adam” (because who doesn’t like being granted a personal identity by a disapproving, patrician stranger?), has no particular interest in the battle for humanity, but does seem to enjoy hunting and killing demons, which he does indiscriminately for the next 200 years. Eventually, it comes out that the demon prince Naberius (Bill Nighy, substantially toned down from his similar Underworld role) has spent those centuries trying to acquire either Adam or Victor Frankenstein’s notes on creating Adam, so Naberius’ pet scientist Terra (“the world’s most respected electrophysiologist,” played by Yvonne Strahovski, a.k.a. Sarah from Chuck) can also revive dead human tissue. As it happens, demons have nefarious uses for animated corpses, even past the proof of concept that shows God isn’t alone in creating human life.

The story is so much cheesy gothic nonsense, packed with plot holes and wearyingly familiar developments: Given a perfect chance to capture Adam, the demons for some reason kidnap Leonore and demand to exchange her for Adam, largely to further a damsel-in-distress plot and heighten the tension between Adam and Leonore’s walking-slab-of-beef second-in-command, Gideon (Jai Courtney). Adam’s 200-year status as a soulless, selfish monster who hates mankind comes to a shrieking halt the second he spots Terra. (Of course the woman who represents all humanity in this story is named “Terra.”) Naberius has an ambitious plan conceptually and visually stolen straight from Van Helsing. And it all unfolds via one big, explode-y battle after another—often ill-justified and choreographed as visually confusing, choppy blurs of martial-arts-derived badassery.

But as blocks of generic fantasy action-cheese go, I, Frankenstein is at least enjoyably redolent. Where so many action antiheroes try to look tough by repressing their visible emotions until they become inert and indistinguishable, Eckhart’s performance vibrates with contained fury and barely contained loneliness. Nighy is well-versed in chewing scenery while providing some honest menace. Even Otto, in her familiar role as remote queen and figurehead, manages a little grace. And all of them approach the material with the kind of self-important, unwinking gravity that makes for a great bad film, especially when everyone concerned is posturing atop cathedrals or looming in dramatically lit steel-and-glass rooms. Beattie pours on the excess: in the gothic score, heavy on Lisa Gerrard moaning and thunderstorm instrumentation; in the visual design, pitched at the point where German Expressionism meets medieval weaponry; in the dialogue, which sounds like the stage direction “[Menacingly.]” was probably in front of every line not spoken by Terra. As the Underworld movies proved, self-important bombast packages neatly into a variety of formats and installments. Beattie and Grevioux are clearly hoping I, Frankenstein will as well. There are worse ways to launch a series.