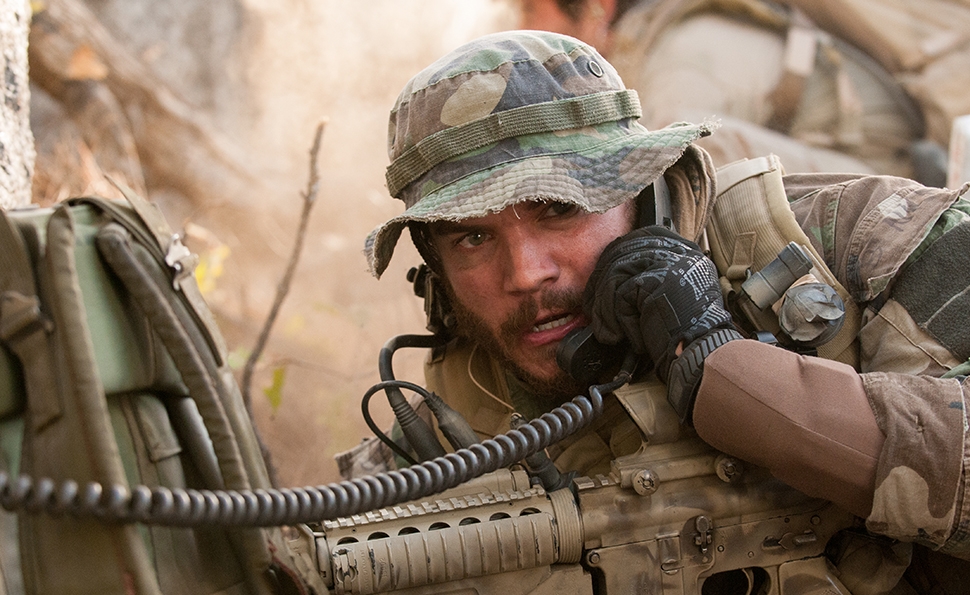 Toward the end of Zero Dark Thirty, a handful of CIA agents explain to a Navy SEAL team their plan to kill Osama bin Laden, and are met with skepticism, because these SEALs have been on these kinds of operations before, and have seen how they can go wrong. Peter Berg’s white-knuckle war movie Lone Survivor—based on Marcus Luttrell’s memoir of the same name—is about one of those “cursed ops.” In June of 2005, a four-SEAL team was deployed to the mountains of Afghanistan in an attempt to directly engage and possibly cripple the Taliban forces working in the area. But before their mission even got underway, their position was accidentally uncovered by passing goat-herders, and because of the remote, mountainous location, they were unable to call for extraction right away. The SEALs were quickly ambushed, and a deadly firefight ensued.

Unlike Zero Dark Thirty, which covered the decade of false starts and preparation that preceded the bin Laden mission, Lone Survivor only spends about 10 minutes on what life is like for these SEALs before they undertake what was known as “Operation Red Wings.” Mark Wahlberg stars as Luttrell, who uses his downtime at the base to engage in dopey macho tests and help his buddy Michael Murphy (Taylor Kitsch) plan a wedding. And then Luttrell is sent out into the field, under Lt. Murphy’s command, alongside two more brothers (played by Emile Hirsch and Ben Foster), and for the next 100 minutes or so, Lone Survivor is nonstop suspense and violence, given a layer of poetic grandeur by the Explosions In The Sky soundtrack.

Berg is a good action director and a smart screenwriter. He keeps Lone Survivor uncomplicated, holding closely to the details of what happened to Luttrell and his fellow SEALs during the harrowing hours when they were under siege, hiding behind rocks on steep hills with unsteady footing. But the simplicity of Lone Survivor eventually becomes a handicap, because after a certain point, the film becomes just one long battle sequence, lacking narrative ebb and flow. This isn’t a tale of adventure and survival, like Gravity or All Is Lost; it’s just brute force against brute force. And Berg doesn’t leave much room in Lone Survivor for ambiguity or anti-war sentiment. He opens the film with real footage of real SEALs going through a training program that looks like literal torture, and he ends with a long video tribute to the men who died in Operation Red Wings and the families they left behind. Lone Survivor is a two-hour salute to American heroes doing what needs to be done, against impossible odds.

There’s nothing inherently wrong with that. Not every war movie has to conclude that violence never solved anything, or that the military dehumanizes soldiers. There’s plenty of room in the cinematic spectrum for a throwback gung-ho combat picture. But moments scattered throughout Lone Survivor suggest the more nuanced and thought-provoking approach that Berg ultimately chose not to pursue. Berg contrasts the confident, technologically advanced American military leadership and bases with what it’s like for the SEALs in the field, dealing with faulty equipment and scenarios no one anticipated. The two best scenes in the film mirror each other: In the first, Luttrell and his comrades debate whether they should kill the goat-herders, taking into account the morality of their decision and how it’ll look on CNN; in the second, Luttrell becomes the subject of a similar argument when he gets captured, and for a few minutes, he knows what it’s like to have people yelling in a foreign language about whether he needs to die. Those scenes could’ve easily been the heart of Lone Survivor, confronting the realities of waging war in the 21st century. But on balance, there’s far less of that in the film than there is of bloodied SEALs lifting their guns and screaming at the enemy, “You can die for your country, I’m gonna live for mine!”