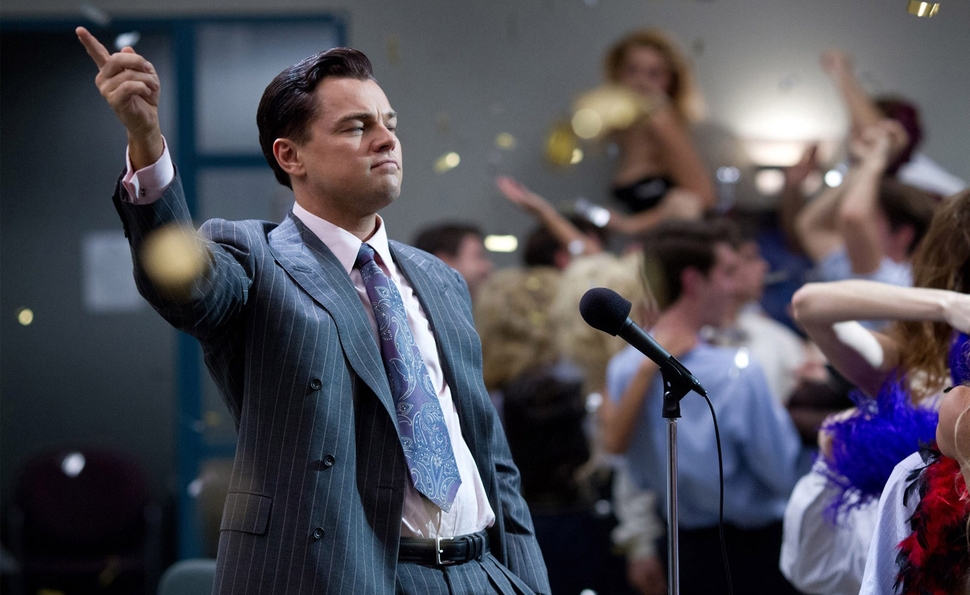 When Jordan Belfort, the off-off-Wall Street stock pirate in Martin Scorsese’s The Wolf Of Wall Street, addresses the vast bullpen at Stratton Oakmont, his firm on Long Island, his words are tossed out like generous chunks of elk carcass. This is the ring in Scorsese’s Raging Bull, a place where absolute savagery is not only encouraged, but required, and scripted cold calls are delivered like a roundhouse to the jaw. After filling their bellies with orders from the rich and dupable, Belfort’s men (and they’re nearly all men, save for a few thick-skinned warriors in Chanel) are treated to booze- and coke-filled bacchanals, complete with frathouse hazing rituals, dwarf-tossing, and hookers of many varieties and price points. It’s juvenile. It’s sexist. It’s criminal. And it’s also, in Scorsese’s view, capitalism at its essence.

The story of Stratton Oakmont has been told onscreen before—and well—in 2000’s Boiler Room, which approaches the outlaw investment firm from the perspective of a college dropout and math savant (Giovanni Ribisi) who joins other Wall Street misfits on the fast track to millions and McMansions. (In maybe the most telling image from either film, young brokers gather in a massive, virtually empty house to watch their hero, Gordon Gekko, work his dark magic in Wall Street.) But Scorsese doesn’t approach Belfort’s autobiography like Boiler Room’s moral tale, even though Belfort, now a bestselling author living high off motivational speaking, angles his book toward self-serving redemption. He and screenwriter Terence Winter are more interested in the culture and tactics of Stratton Oakmont and what they say about the rotten heart of America’s financial system—and about what types of business we consider “legitimate.”

In other words, Scorsese has made another gangster movie, and with all the spectacular élan expected from the director of GoodFellas and Casino. Like Robert De Niro’s “Ace” Rothstein in the latter film, Leonardo DiCaprio’s Belfort operates in settings where it’s socially acceptable for ordinary people to be lifted up by their ankles and shaken until all their money falls out. Las Vegas and Wall Street are institutions with the establishment’s faith and support, provided that they put a good face on the practice of ripping people off. The problem with guys like Rothstein and Belfort isn’t that they’re thieves—their problem is, they do a lousy job hiding it. To Scorsese, their transgressions are self-evident. It’s the hypocrisy that burns.

The early scenes of The Wolf Of Wall Street find Belfort starting at the bottom as a cold-caller on Wall Street, trying to hook the big fish for his bosses to reel in, but the stock-market crash of 1987 bounces him from that world as quickly as he arrived. But he takes away one important nugget during an infinite-martini lunch with his superior (Matthew McConaghey, in an electric five minutes), which is that his job is to separate investors from their money, not just hope his fortunes will rise with theirs. Young, hungry Belfort takes that Wall Street ethos to a penny-stock outfit in the suburbs, where bridge-and-tunnel types try to milk a few bucks from working-class dupes over worthless companies. Belfort believes he can apply that same “pump and dump” technique to wealthy investors, too, and his instincts and bravado quickly make him a millionaire. With script in hand, he and his cronies, including right-hand-man Donnie Azoff (Jonah Hill), build an empire on Long Island, daring the Feds to shut them down. (The Feds oblige.)

Subsisting on a diet of liquor, coke, mescaline, quaaludes, and good old-fashioned adrenaline, Belfort lives hard and fast in a culture where such indulgences are the spoils of war. Scorsese and Winter turn the hair-raising anecdotes from Belfort’s book—wild parties on the trading floor, cash runs to Switzerland (including a seafaring adventure much less dignified than the one in All Is Lost), a blackout episode on the legendary Lemmon 714 quaaludes—into a thrilling, immersive experience. As with GoodFellas and Casino, Scorsese brings the audience into the seductions of being an outlaw—to quote the former: “We were treated like movie stars with muscle. We had it all, just for the asking.”—rather than pretend that membership in Belfort’s million-dollars-a-week club doesn’t have its privileges. And since Belfort and his crew are complete knuckleheads, every bit the low-class slobs who bray like animals on the trading floor, The Wolf Of Wall Street may be the funniest film of 2013, rife with gross misbehavior, pranks, and tomfoolery.

Spread out over three hours, The Wolf Of Wall Street is an exhausting experience, perhaps too much in tune with one of Belfort’s sleepless, drug-fueled benders. But the length gives Scorsese, Winter, and their ensemble cast an opportunity to build setpieces of suitable extravagance, true to an antihero who installs a helicopter landing deck on his yacht just because he can. He’s living the American Dream, but it’s unsanctioned. If his yacht sailed under the bull-etched flag of Merrill Lynch, rather than a skull and crossbones, his story might have ended differently.