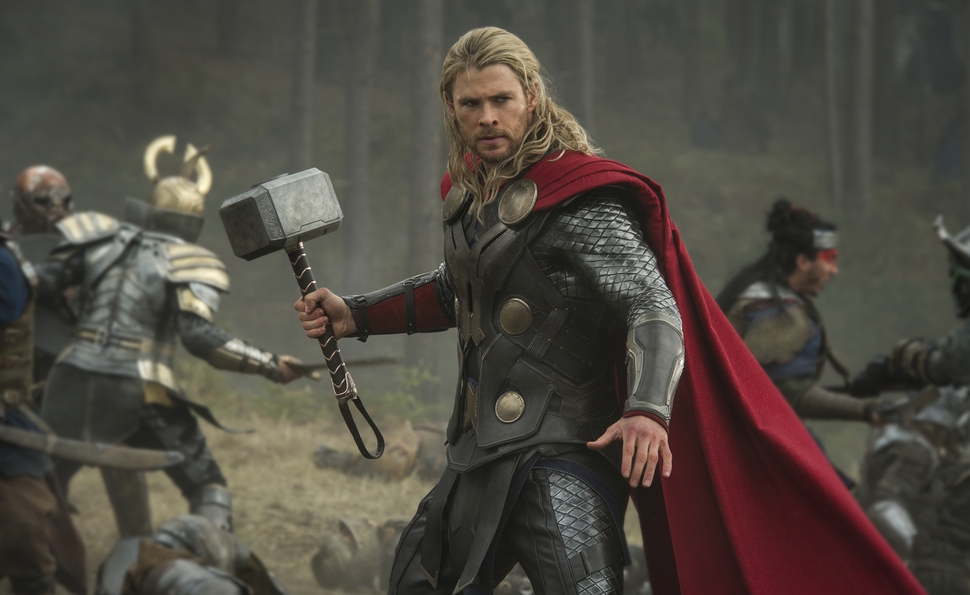 The plot of Thor: The Dark World, the second entry in Marvel’s Thor series, concerns a catastrophe-enabling, once-in-many-millennia alignment of the nine realms that make up our universe. Essentially, the conjunction is an excuse for another reality-threatening cosmic plot that requires the film’s hero to perform valiant acts in order to save everything. As such plots go, it’s pretty standard stuff. But it’s worth considering as a metaphor for all the disparate elements that had to align for Thor: The Dark World to happen: Writer Stan Lee and his brother Larry Lieber became enamored of Norse mythology. They were in a position to use it as fodder during the superhero renaissance Marvel Comics helped usher in during the early 1960s. Resident genius Jack Kirby was able to translate characters from centuries-old sagas into the visual language of contemporary comics. Their reinterpretations fit in surprisingly well alongside Captain America, Iron Man, and others. They endured and thrived over the years, thanks to smart creators like Walt Simonson, whose cosmic, fantastic 1980s run on Thor became a major influence on both Thor films. And finally, technology and tastes synced up in such a way that viewers developed a taste for comic-book-style spectacle in conjunction with the effects capable of bringing them to the big screen convincingly. It’s a strange process that’s made the ancient God Of Thunder a movie hero in 2013.

Fortunately for Thor, the movies seem to like him. As portrayed by Chris Hemsworth, Thor has a charisma capable of cutting through many of the problems of a film like Thor: The Dark World. While the sequel labors to push along a series of plot convolutions involving a mystical, magical, apocalypse-causing whatsit, it also boils down to a butt-simple confrontation between good guys and bad guys. In this case, the bad guys answer to Malekith (Christopher Eccleston, unrecognizable behind makeup and effects work), an ancient Dark Elf whose grudge against Thor and his family predates even the long reign of Thor’s father Odin (Anthony Hopkins) and mother Frigga (Rene Russo) over the realm of Asgard. The film lays out the conflict via a Tolkien-esque opening sequence during which Malekith loses his Aether, a powerful substance by which, under the right circumstances—like, say, some kind of cosmic alignment—he’ll be able to return the universe to his preferred state of darkness. Flash forward to the present day, when such an alignment is on the verge of happening. That means trouble. So, potentially, does Thor’s adopted brother Loki (Tom Hiddleston), who, early in the film, is imprisoned for his actions in The Avengers, and ushered off to dream of schemes that will get him back in the picture.

For most of Dark World’s early scenes, however, Thor remains unconcerned with such possibilities. Having helped rebuild Asgard and usher in peace and prosperity, he reluctantly prepares to assume the throne from a retiring Odin. But his attention keeps drifting back to Earth and Jane Foster (Natalie Portman), the astrophysicist who won his heart during his earlier adventure. Jane has her own problems, including a love life in which no potential partner measures up to Thor, obviously, and a neglected professional life working alongside pal Darcy (Kat Dennings) for Erik Selvig (Stellan Skarsgård), a brilliant mentor still shaken from his encounters with Loki. Jane keeps her eyes on the sky, but not necessarily trained on the stars she’s supposed to be studying. When Darcy stumbles onto what appears to be a portal to another dimension in an abandoned building on the outskirts of London, Jane investigates and becomes the Aether’s unwilling host. Concerned, Thor whisks her away to Asgard.

It’s a crowded place. Too crowded, frankly. Thor: The Dark World is filled with characters introduced in the first film that don’t really have much to do in the sequel. The script sets up the warrior goddess Sif (Jaimie Alexander) as a rival for Thor’s affections—and a potentially better match than the frail Jane—then does nothing with that conflict. Meanwhile, the Warriors Three (Tadanobu Asano, Ray Stevenson, and Zachary Levi) are largely reduced to the sidelines. Further narrative discomfort comes from the Thor/Odin split, which seems more contrivance than conflict, and from the way female characters tend to be the ones falling victim to whatever danger finds its way into Odin’s halls. Jane in particular, though strongly realized by a lively Portman, has little to do but be escorted from one moment of peril to the next. If there were train tracks in Asgard, she would no doubt find a way to get tied to them.

Happily, the film’s other elements more than compensate for its problems. Where other Marvel films have drifted toward a same-y visual style, Thor and its sequel—particularly the latter—benefit from a remarkable George Lucas-does-The Ring Cycle production design that works a potent combination of space opera and Norse mythology, one in which swordplay and laser blasts can exist side by side, and the dungeons of spacious halls boast powerful force fields. Apart from a short conversation during which Jane discovers that quantum mechanics has a lot in common with magic, the film doesn’t really explain how any of this works, but the world is so immersive—and, put simply, so beautiful, even as it skirts to the edges of CGI kitsch—it’s hard not just to follow where it goes.

And it goes to striking places. The credits list a small army of crew members, but director Alan Taylor (making his first feature since 2003, after a long stretch directing episodes of virtually every great TV show of the last decade) keeps his protagonists from getting lost within the chaos. He keeps returning to compositions that bring the action down to human (or at least demigod) scale, and gives his leads room to breathe amid the spectacle. Though many of the supporting characters sometimes feel like ballast—on Earth and in Asgard—the central triangle of Thor, Jane, and Loki remains compelling. Hemsworth and Portman have considerable chemistry, and Hiddleston remains an extremely sympathetic villain, seeming more hurt than menacing, no matter how villainous his actions. He needs to be brought down, sure, but he also clearly needs a hug and a sympathetic ear.

In the future, he and his companions will also need a story that feels unique to their world. Thor: The Dark World begins as high fantasy and ends as a blown-up episode of Doctor Who. It looks like no other movie, Marvel or otherwise, and it’s populated by characters compelling enough to support a more complex, richer story than this one. However unlikely it was, the galaxies have aligned in Thor’s favor so far. Maybe they’ll bless him with a movie fully worthy of his legend next.