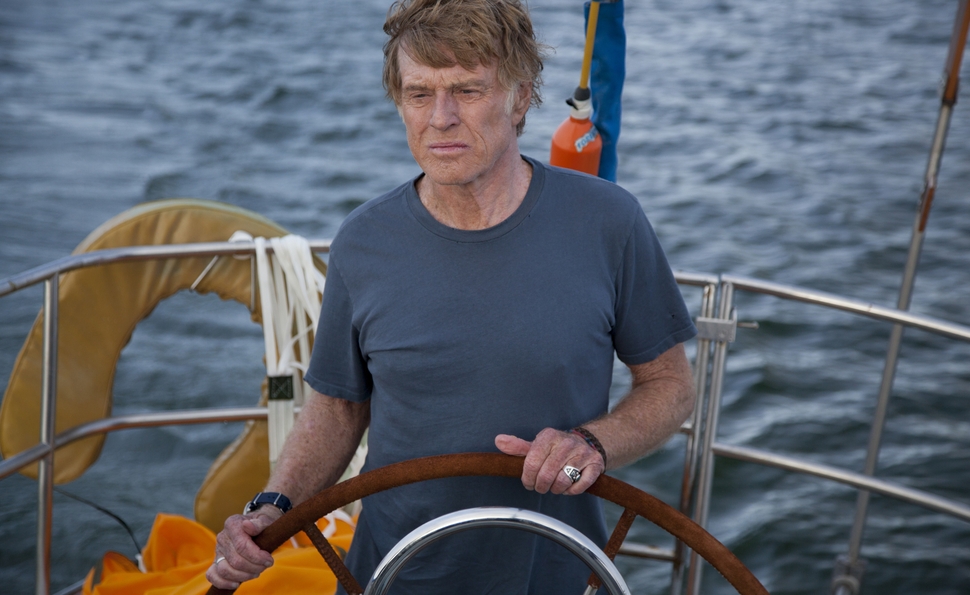 In All Is Lost, Robert Redford plays a yachtsman who remains unnamed until the credits, which dub him “Our Man.” That suits the film, which barely leaves its protagonist’s side over the course of its running time. It’s also a name the 77-year-old Redford has earned at this point in his career, having spent the majority of it as a movie star of the front rank. He’s one of the last of the titans; if he isn’t our man, who is? (And since Redford is the only cast in All Is Lost, it isn’t like he has a lot of onscreen competition for the title, either.)

Though All Is Lost would work without the history he’s accumulated over the course of a lifetime in front of the camera, Redford’s familiarity adds a layer of poignancy. Though Redford hardly looks infirm, or near it, it remains a film about struggling against the inevitability of death, and how age only intensifies that struggle. In one scene, using a handle improvised from the end of a broom, Our Man has to pump (and pump and pump) water from his yacht to keep from sinking, and Redford lets the physical toll of the task—and a growing sense of futility—register on his face.

It’s one of many moments in which Redford’s wordless performance conveys what’s going on inside his head. The film opens with a voiceover in which Our Man, sensing the end is near, pens an apology. All Is Lost never reveals to whom and for what, nor does it offer many hints, or suggest what brought Our Man to his solo sojourn in the middle of the Indian Ocean in the first place. (One possible reason for his isolation: In a later scene, he tosses back whiskey like it’s water. But the situation he’s in practically demands it, and it’s never out of the question that he simply enjoys being alone.) Apart from a couple of memorable exclamations, that voiceover is also the only time Redford speaks. Once the film flashes back to an abrupt awakening—in which he looks down to see a child’s shoe floating at his feet, then discovers his boat has collided with a shipping container—he becomes entirely a man of action.

In his increasingly desperate attempts to save his yacht, and his life, Our Man has no shortage of tasks to perform, starting with patching up the sizable hole the collision has left in his vessel’s hull. He goes about his work steadily and methodically, using the tools at his disposal, and improvising when necessary. This quickly threatens to turn impossible, with every act of progress undone by a setback—and sometimes more than one. As Our Man tries to maneuver toward some shipping lanes, where rescue is at least a possibility, he encounters storms, failing equipment, and the limits of his own expertise; he’s forced to take time out, mid-crisis, to study the book Celestial Navigation For Yachtsmen.

At least part of him takes it as a challenge. In one of the film’s most memorable images, he stands at the helm and watches the sun drop below the horizon, looking pleased to be at sea, no matter what the circumstances. Soon, when matters take a turn for the worse, his face makes that feeling just as clear, slipping into threatened determination with undertones of terror. What Redford does with the character syncs perfectly with what writer-director J.C. Chandor does behind the camera. Both convey just enough without overdoing it. All Is Lost is Chandor’s second film, after 2011’s Margin Call, and unmistakably the work of a director in precise control of what he wants to accomplish—and interested in immediacy above all. Without pausing to explain any nautical details, he conveys what’s happening, why the protagonist does what he does, and the ways his efforts fall apart. When the film moves away from Redford, it pulls up into the air or plunges down into the ocean just far enough and just long enough to reveal the direness of the situation.

The approach results in one scene of heart-in-throat action after another, with Chandor’s immersive approach shoring up Redford’s remarkable, understated performance. The audience knows nothing of the man, really, except that he possesses a will to live, and that he’s lived a life of some regrets. That’s enough. Redford and Chandor turn him into a fully fleshed-out character simply by showing him working, struggling, and staving off despair. Like Gravity, to which it compares favorably, it’s a classic tale of survival that draws on how movies, in the right hands, can make viewers see the world through others’ eyes, and to feel what keeps them grasping as it threatens to slip away.