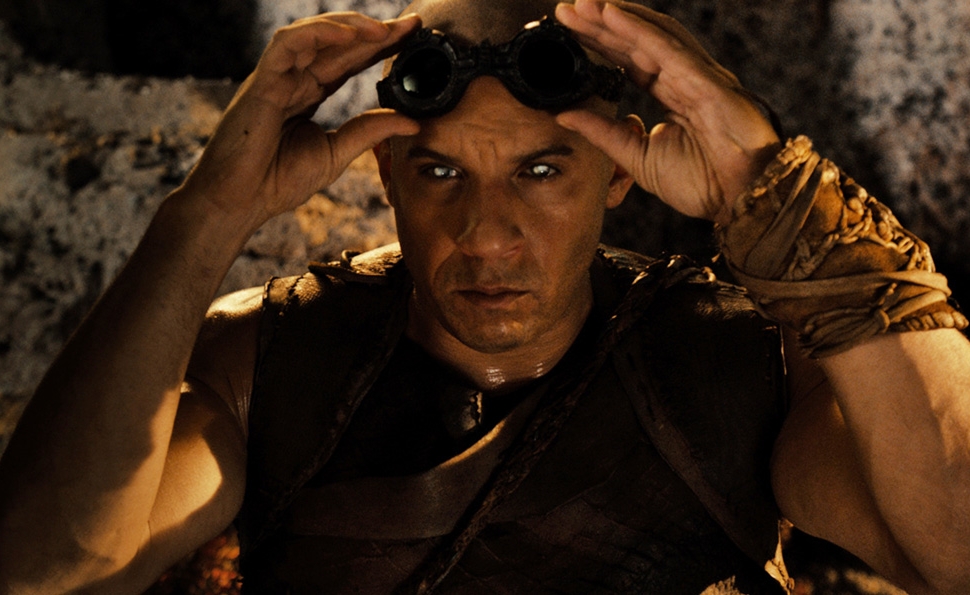 One of the most memorable non-monster moments in Aliens is a brief, iconic exchange between two tough-as-tungsten-carbide space marines played by Bill Paxton and Jenette Goldstein. Watching her do pull-ups, he sneers, “You ever been mistaken for a man?” “No,” she snaps back. “Have you?” It’s a funny moment, but it’s also shorthand for the marines’ relationships in general—a telling window into a military world of who’s-the-butchest banter and casual dominance-jockeying as entertainment.

Co-writer and director David Twohy essentially extends that two-line exchange into a two-hour movie with Riddick, the third installment in the series that began with 2000’s cult-hit monster movie Pitch Black and continued with 2004’s bombastic space opera Chronicles Of Riddick. Every moment of the new Riddick is a glowering contest of wills, punctuated by ultra-aggressive he-man gruntiness. Sometimes Riddick is fighting the environment. Sometimes he’s fighting other people. Sometimes he’s fighting alien critters. Sometimes he’s fighting his own body, when it momentarily falters—though Twohy still takes pains to emphasize its improbable, inhuman strength. No matter what, though, Riddick is fighting… or sitting back and chuckling from a position of dominance so profound, he doesn’t even have to bother fighting.

It’s a simple power-fantasy that invites viewers to imagine themselves in Riddick’s boots, as the biggest, most impervious, most unquestionably indomitable badass in the room. And for a while, it’s fun. But Riddick eventually runs out of other things to offer, and after two hours, the unrelieved monotony of macho one-upsmanship wears thin.

Last seen brooding on his throne like a battle-weary Conan at the end of Chronicles Of Riddick, convicted murderer and prison-transport escapee Richard B. Riddick (Vin Diesel) starts Riddick alone and badly wounded in a blasted alien desert, where he spends a lengthy first act fighting off predators and patching himself up as best he can, given the virtually no resources at hand. Twohy takes his time in flashing back to connect the narrative dots that brought Riddick to the desert, and in sending him on to the next step: finding and activating a distress beacon, which prompts two groups to converge on the planet, hoping to bring him in. One, a ramshackle bounty-hunting outfit led by the posturing Santana (Bad Boys II villain Jordi Mollà), wants Riddick dead, which will double the reward. The other, a more professionally geared military team under Boss Johns (Matt Nable) and his second-in-command Dahl (Battlestar Galactica’s Katee Sackhoff), has a separate agenda. More importantly, both teams bring plenty of barely characterized mooks for Riddick to thresh his way through.

Riddick’s most basic problem is that it tells too many stories with not enough variation. Twohy’s pacing is admirably languid, stylish, and distinctive, particularly in that opening act, which feels like Wall-E’s exploratory lead-in, but with more grumbling narration and CGI monsters. Even once Twohy gets to more standard material—the long sequence of Riddick hunting his hunters, and the lengthy climax that recapitulates Pitch Black, with endless alien critters stalking in darkness—he lets the material sprawl instead of rushing through it in a breathless, impressionistic hurry.

But Riddick is a character with only one mode. He’s a vicious, elemental predator. Diesel plays him with a relentless but usually banked energy, assisted by the special effect that gives him animalistic glowing eyes in darkness, and makes even his mildest expressions look opaque and feral. But there are only so many narrative possibilities for the guy who has to handily win virtually every encounter. Even when Riddick loses something he loves, or cauterizes his own wounds with a white-hot stone, or sticks spikes through his leg to pin a broken bone, Twohy’s camera has to push in close to catch the eye-twitches and lip-curls that pass for reaction. Even in chains, he tyrannizes his quailing captors. He’s always in command.

None of which stops his enemies from engaging in that Aliens dominance-jockeying—sometimes with him, but when he’s unavailable, or when he’s proven himself the insurmountable alpha, with each other instead. But since they, too, have to be unrelievedly bad-ass, they don’t provide much variation or humanizing detail. The supplementary cast of mercs and space-rangers feel like moonlighting Firefly extras; as with Joss Whedon’s space Western, the technology, set design, and costumes of Riddick’s world have an agreeably battered, well-used look, except when things are shiny and new to make specific points about their owners. Riddick’s enemies come in two distinct classes, the haves and have-nots, which suggests a bigger, more complicated, much more thought-through universe than this planet-bound installment allows for.

But while their gear distinguishes them, their characters are still all generic bluster and one-upsmanship, particularly where the violence-happy Dahl is concerned. (Dear filmmakers: You get no diversity points for sticking a “strong female character” into your film if she doesn’t actually do anything but lurk on the sidelines, punch people, strip for the camera, and eventually offer to change her sexual orientation for the protagonist after he charmingly offers to “go balls-deep” in her.) And in the end, they’re largely cannon fodder used as one more proof of Riddick’s dominion over all.

There are plenty of reasons for speculative-fiction fans to enjoy Riddick, which finds a careful balance between blockbuster action and arty distinctiveness, between generic crowd-pleasing adventure and franchise-forwarder set in a specific, idiosyncratic world. David Twohy has said in interviews that Riddick is a sidestep from his original plans for a Riddick trilogy, beginning with Chronicles and getting further into the character’s backstory and larger universe; he hasn’t actually said, though it seems evident, that Riddick is a consciously audience-baiting attempt to win back the fan base Chronicles alienated, in hopes that the trilogy can continue as planned. With that strategy in mind, it makes sense that Riddick would attempt to get back to the series’ roots with a long climax repeating the Pitch Black material that won viewers over in the first place.

But while Riddick is impressively textured in the small details that make up a world, its multi-story approach highlights the problems of a character whose supply of facial expressions doesn’t extend past “snarl” and “smirk.” Since every situation prompts the same reaction, the film’s second hour doesn’t feel much different than the first, no matter how much circumstances change. Riddick taps into a primal well of audience wish-fulfillment, but over the course of its unrelieved, monotonous length, it does its best to suck that well dry. And it’s hard to look forward to further franchise developments when this installment explores that well at such depth, but can’t find anything new at the bottom.