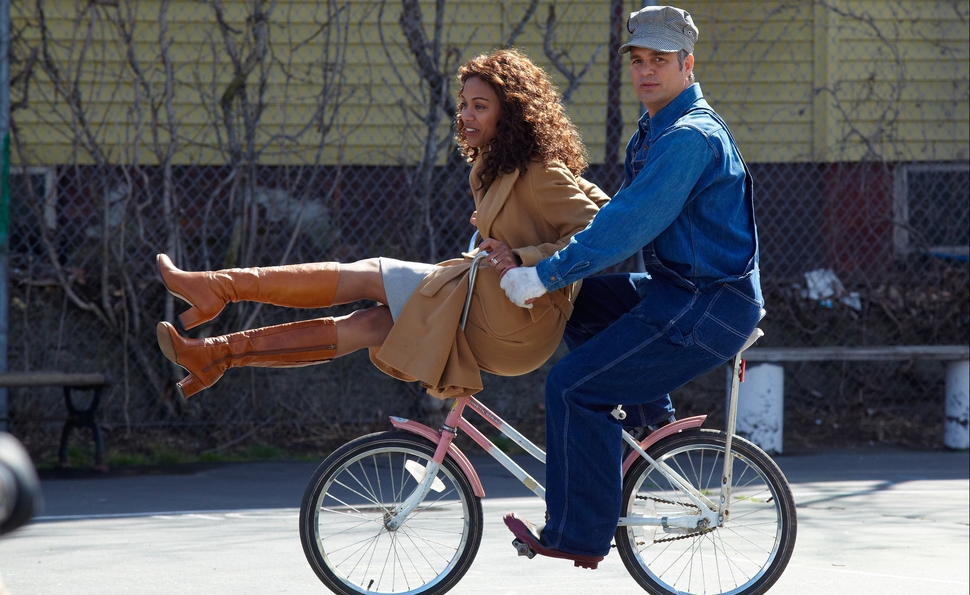 Unconventional childhoods make excellent fodder for the big screen. From the holiday-related hijinks of A Christmas Story to the fish-out-of-water humor of Mean Girls to a little classic Swiss Family Robinson fun, kids who have wacky upbringings are consistently fun to watch. (And for those whose experiences as a tyke were even remotely weird, they’re also relatable.) Marrying that lightheartedness with heavier tones and storylines can be tricky, however, as is the case with Maya Forbes’ autobiographical feature, Infinitely Polar Bear. Based on Forbes’ own experiences growing up with a manic-depressive father, the film lightly fictionalizes parts of her childhood to bring her unconventional upbringing to the big screen, with results that are mostly mixed, but beautifully portrayed.

Snappy editing from Michael R. Miller and a period-appropriate soundtrack keep the film moving along quickly, but both are particularly important during the film’s opening moments, which use quick cuts and cool sounds to steep the audience in the world of the Forbes family. Boston resident Cameron (Mark Ruffalo) has been diagnosed with manic depression, and while his longtime illness has made it difficult for him to hold down a job, it didn’t stop him from snagging a loving wife, Maggie (Zoe Saldana), and a couple of adoring kids. As the film opens, however, Cam’s inability to provide for his family has placed so much stress on him that he breaks down, forcing Maggie to make tough decisions about the future of their family, financial and otherwise.

Forbes juggles tone not just from sequence to sequence, but within single scenes, affording viewers a truncated, though well-intentioned, peek inside the ever-changing temperature of her own family life. Cam zings between highs and lows throughout the film. The ebbs and flows of his illness occasionally slow, but they’re never entirely eradicated. Ruffalo’s performance verges on the broad and theatrical, all the better to approximate the histrionics that seem so essential to Cam’s personality, but it gets better, gentler, and more refined as the film goes on.

The dueling parents are often saddled with an uncomfortable, constantly evolving good-cop/bad-cop dynamic, at least in their children’s eyes. And while Ruffalo’s part is more outwardly complicated, Saldana’s understated performance holds Infinitely Polar Bear together. (The film, which takes place in the late 1970s, also sets up commentary on their reversed gender roles, and while that does result in a very funny dinnertime conversation between Cam and Maggie as their gobsmacked daughters look on, it does feel shoehorned-in alongside all the other issues constantly threatening the family.)

Once Cam emerges from the fog of his breakdown—and some heavy drugs that dull him down and fatten him up—an underemployed Maggie hatches a plan: She’ll go to New York City to get her MBA at Columbia, which will hopefully allow her to grab a better job once she’s graduated. Meanwhile, Cam will move into their squished apartment to care for the girls. Although Maggie’s decision to head off to school makes sense in the grand scheme of things—she’s attempting to cobble together a better future for her daughters, who have already had their fair share of upheaval and disappointment—in practice, it’s nothing short of insane. Cam, despite his good intentions and his desire for stability, isn’t cut out to be the primary caregiver, and the film makes no good argument to the contrary. At best, he’s a fun dad; at worst, he’s ill.

The routine of caring for his daughters proves overwhelming, and Cam stumbles back into bad habits and bad thoughts with startling regularity. Changes are small, and victories, like Cam simply becoming more pragmatic than his children when it comes to domestic matters (like what kind of car they should own), are hard-won and believable. Forbes’ film is unencumbered by the sort of clichés so often represented in other films about mental illness, and although Forbes’ grasp on tone frequently wobbles, it never falls over.

As good as Ruffalo and Saldana are, the best parts of the film are the lovely, unpretentious performances by Imogene Wolodarsky (Forbes’ daughter) and Ashley Aufderheide as Cam and Maggie’s daughters. The charming pair believably flits between admiration and exasperation for both of their complicated parents, shifting allegiances, big tantrums, and all. The duo exhibit two of the best child performances of the year, and their ability to grapple with the film’s heavy subject matter and light tone in equal measure are more successful than the film’s ability to do the same thing.