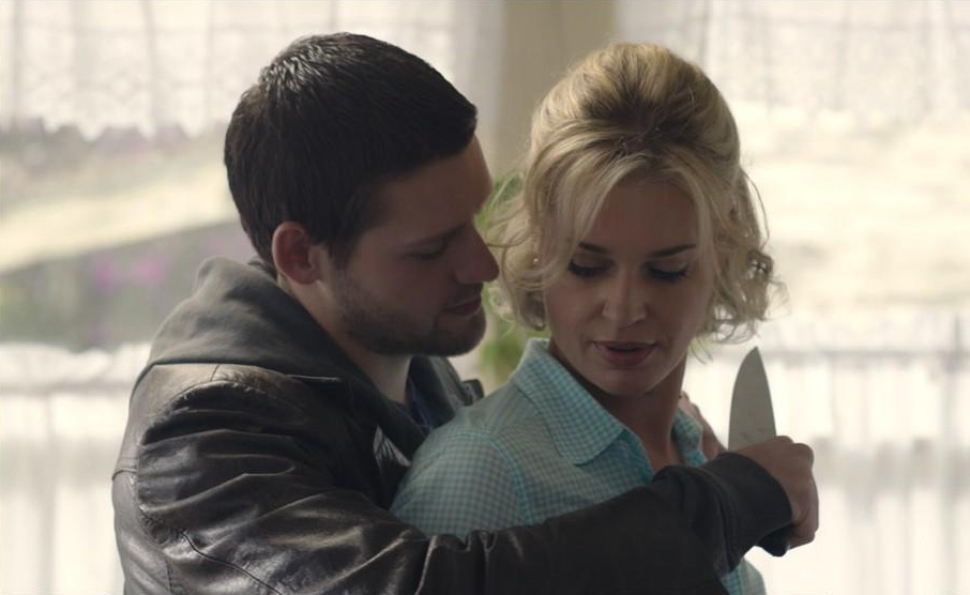 The best scene in Antonia Bogdanovich’s Phantom Halo seems like a guide to the film itself. A struggling kid (Thomas Brodie-Sangster) performs a pasted-together Richard III soliloquy on Santa Monica’s Third Street Promenade—the speech including “I clothe my naked villainy / With old odd ends stolen out of holy writ.” It’s the kind of slightly obvious high-culture/low-setting scene that might be found in a dozen films about a young man coming into his own. But there’s a payoff. His acting is a diversion from the real action: his older brother (Luke Kleintank) dexterously picking the pockets of the assembled audience. Phantom Halo tries to pull off a similar con, sending high-culture signals that comment on the gritty crime story that gives it structure. But while it has plenty of Shakespearian monologues (does it ever!) the stinger is nothing as graceful as a pickpocketing. It’s more like one of those Vegas grifters who tell endless, implausible stories of misfortune—flat tires, lost phones, stolen bus tickets—until the mark gives them $20 out of sheer exhaustion.

The problems start at the very beginning, with a voice delivering Macbeth’s “Tomorrow, and tomorrow, and tomorrow” speech over darkness. The voice belongs to Warren Emerson (Sebastian Roché), who seems to have checked in from a production of Long Day’s Journey Into Night next door. Emerson is a failed actor, a failed husband, and well on his way to being a failed father, and clues to all three washouts can perhaps be inferred from the fact that their two sons—the Promenade grifters—are named “Samuel” and “Beckett,” after the writer who came up with the memorable image of women giving birth astride the grave. (It’s a measure of Warren and his ex-wife’s commitment to this stunt that Beckett is the eldest—what if their next child had been a daughter?) Like James Tyrone in Long Day’s Journey, Emerson thinks his sons should remember their Shakespeare and forget the third-raters, and he isn’t above tearing up an issue or two of Samuel’s beloved Phantom Halo comic books to make his point. Most of the time, he’s too busy drinking and gambling away the rent money to be bothered with theater, but halfway through the film, he gives an encore performance of the Macbeth soliloquy for the benefit of any audience members who missed it the first time.

Against this backdrop of old odd ends stolen out of holy writ, Beckett and Samuel quickly get in over their heads with the Los Angeles criminal underground. Warren is in debt to a loan shark named Roman (Gbenga Akinnagbe); Beckett sees a way out when he discovers his insufferable old friend Little Larry (Jordan Dunn) has become a talented counterfeiter. They’re going to try to sell Larry’s bills to a mobster named Smashmouth (Tobin Bell) before Larry’s stepfather Donny (Ashley Hamilton) finds out he’s making a play for the big time. In a film in which hardly anything makes sense, the counterfeiting operation is a particular lowlight: a nebulous affair that constantly changes with the needs of the plot. Little Larry can already print perfect notes, but they get more perfect after he steals a Heidelberg press. It’s a disaster that Warren is gambling with $150,000 in fake bills, but no big deal that the boys have bought a Bentley Continental Supersports—sticker price $300,000—with the same counterfeit cash. Meanwhile, Samuel steals butter and eggs from yet another crime lord (Raymond Ma), costing him dearly, but sparking a strange connection with the enforcer who comes to collect (Susan Park). On top of everything else, there’s a chemistry-free romance between Beckett and Larry’s mom (Rebecca Romijn), which seems to have been airlifted in from a Douglas Sirk film—all faded wallpaper and sexually charged yard work.

It’s all as convoluted as it sounds: Phantom Halo is overstuffed even before Bogdanovich starts layering in the soliloquies and comic book metaphors. But despite the nonsensical plot and unearned allusions, the film has one saving grace. In the spirit of the thing, here’s a stolen phrase from a Samuel Beckett character with a stolen name: At 89 minutes, it’s a quick watch, God help us all.