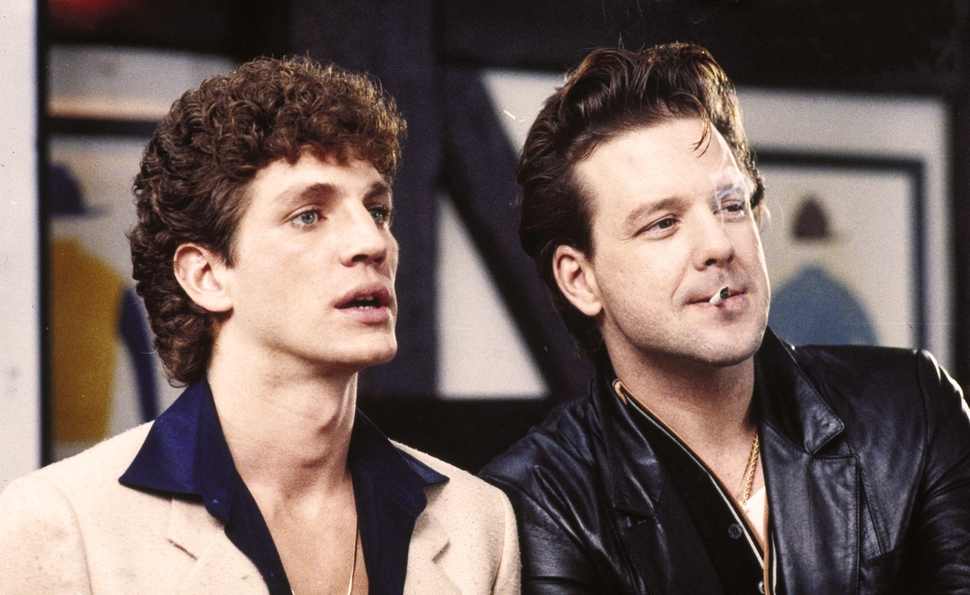 Following his attention-getting appearances in 1981’s Body Heat (in which he played a smoking-hot arsonist) and 1982’s Diner (an ensemble film where he handily out-handsomed his co-stars), Mickey Rourke had about a decade as a conventional—and conventional-looking—leading man before his acting career took a backseat to his detour into professional boxing. In a vintage featurette included on Shout! Factory’s release of the 1984 comedy-drama The Pope Of Greenwich Village, director Stuart Rosenberg predicts major stardom for Rourke and his co-star, Eric Roberts, who gets top billing in the film. Roberts also has the flashier role as motor-mouthed fuck-up Paulie, who’s always getting his cousin Charlie into one jam or another, but Rourke’s the one who makes the deeper impression.

Introduced dressing to the nines for his job as maître d’ in a swanky restaurant in the Village—a job he loses in short order thanks to Paulie’s penny-ante chicanery—Charlie dreams of someday running his own place in the country with his supportive girlfriend (Daryl Hannah), a dance instructor who openly wonders why he hasn’t cut his cousin out of his life yet. Whether it’s out of misplaced family loyalty or unconscious self-sabotage, Charlie goes in on what Paulie promises will be “a big score” with an unassuming safecracker (well-played by Kenneth McMillan, at the opposite end of the spectrum from his repulsive Baron Harkonnen in the same year’s Dune), little realizing the safe they’re robbing belongs to vindictive mobster Bed Bug Eddie (Burt Young), as is the $150,000 they find inside it. Further complicating matters is the dirty cop on Eddie’s payroll who catches them in the act and winds up dead at the bottom of an elevator shaft, adding murder to their list of potential criminal charges.

Based on the novel by Vincent Patrick, who also came on board to pen its screenplay, The Pope Of Greenwich Village benefits immensely from Rosenberg’s decision to film on location in Little Italy, which gives every scene a lived-in feel. As photographed by John Bailey—at the time, the go-to cinematographer for Paul Schrader (American Gigolo, Cat People, Mishima: A Life In Four Chapters, Light Of Day)—the city’s streets, restaurants, back rooms, and lofts are as much a character as Charlie and Paulie, a dreamer and a schemer trying to get ahead in a world where the chips are stacked against them.

Fairly late in the game, Charlie tells Paulie he’s “a very strange man,” but this should be obvious to even the most casual observer. With his permed hair and hyperactive body language, Roberts projects his character’s eccentricities to the cheap seats, leaving Rourke to turn in the more naturalistic and nuanced performance. The one that got attention at awards time, though, was Geraldine Page’s turn as the mother of the dead cop. Her two scenes (one of them opposite homicide detective M. Emmet Walsh, who effectively cedes the floor to her) were impressive enough to earn her an Academy Award nomination for Best Supporting Actress one year before she took home Best Actress for The Trip To Bountiful. Rourke’s next trip, on the other hand, was to Chinatown (or the soundstage equivalent thereof) in the epic crime saga Year Of The Dragon, his second film for director Michael Cimino after playing a small role in Heaven’s Gate. Their third and final collaboration—released as part of Shout! Factory’s double feature—was 1990’s Desperate Hours, a definite step down for both of them.

An overblown remake of William Wyler’s 1955 film The Desperate Hours—itself based on the novel and stage play by Joseph Hayes—Cimino’s Desperate Hours cast Rourke in the Humphrey Bogart role of a criminal on the lam who holds a suburban family hostage in their own home while he waits for his girlfriend to show up. Playing the mirror image of his breakthrough role as the soulful ex-con in Body Heat, Rourke is tightly wound as the violence-prone Michael Bosworth, who escapes custody during his high-profile trial with the aid of his attorney (Kelly Lynch), who’s head over heels in love and in over her head with him, his brother (Elias Koteas), who’s loyal to a fault, and his brother’s partner (David Morse), a loose cannon who’s more of a liability than an asset. As for the family they traumatize, in place of the stable unit from the original film, screenwriters Lawrence Konner and Mark Rosenthal (working from Hayes’ 1955 screenplay) substitute one fractured by the extramarital affair of philandering husband Tim Cornell (Anthony Hopkins), who’s initially less welcome in his former home than its scuzzball invaders.

Once the hostage situation gets underway, Tim’s estranged wife Nora (Mimi Rogers) is given little to do other than be terrorized and constantly on the verge of tears. That means it’s up to Tim—or “Timmy,” as Michael mockingly calls him—to keep it together long enough to somehow get the upper hand and protect his family. (Continuing the thread from Cimino’s script for Magnum Force through The Deer Hunter and Year Of The Dragon, Tim is revealed to be a Vietnam veteran, which explains why he’s so capable under duress.) Meanwhile, on the outside, Lindsay Crouse’s special agent has to fight her condescending male counterparts in the FBI every step of the way in an attempt to recapture Michael with a minimum number of casualties, the Cornells included.

Desperate Hours found Cimino working with producer Dino De Laurentiis for the second time, albeit with a lower budget than he enjoyed on Year Of The Dragon. (There would be no side trips to Thailand featuring hundreds of extras this time out.) As a result, the film feels smaller, which is understandable considering how much of it takes place in one location and is centered on a single family fighting for its survival. Cimino does occasionally get to take advantage of Colorado and Utah’s breathtaking landscapes, though, using them as the backdrop for the dramatic—and ultra-violent—apprehension of one of Michael’s accomplices.

If there’s a theme that links The Pope Of Greenwich Village and Desperate Hours together, it’s the strength of familial bonds above all others. (The latter’s tagline could have even been “The Family That’s Taken Hostage Together, Stays Together.”) Another is the sense of danger underlining just about every scene, which has as much to do with Rourke’s unpredictability as a performer as it does the subject matter. (On the behind-the-scenes featurette on Desperate Hours, Hopkins diplomatically calls him a “very intuitive” actor.) But where The Pope is more about the threat of violence—what might have been its bloodiest scene takes place entirely out of frame—Desperate Hours places it front and center, blood squibs and all. That it’s less exciting to watch than The Pope’s high-wire act is the difference between a job that requires actual acting and one that’s about going through the motions. With the prospect of more films like it in his future, Rourke’s decision to walk away from Hollywood while his star was still on the ascendant makes a lot more sense.

In addition to the aforementioned featurettes and trailers for both films, The Pope gets a few more extras, including separate “personality profiles” for Rourke and Roberts and a short piece on shooting in “New York City: New Hollywood on the Hudson.” The most honest moment, however, is saved for “The Anonymous Art of the Character Actor,” which focuses on McMillan, Young, and Page, who urges people not to go to the bathroom in the middle of the film lest they miss her.