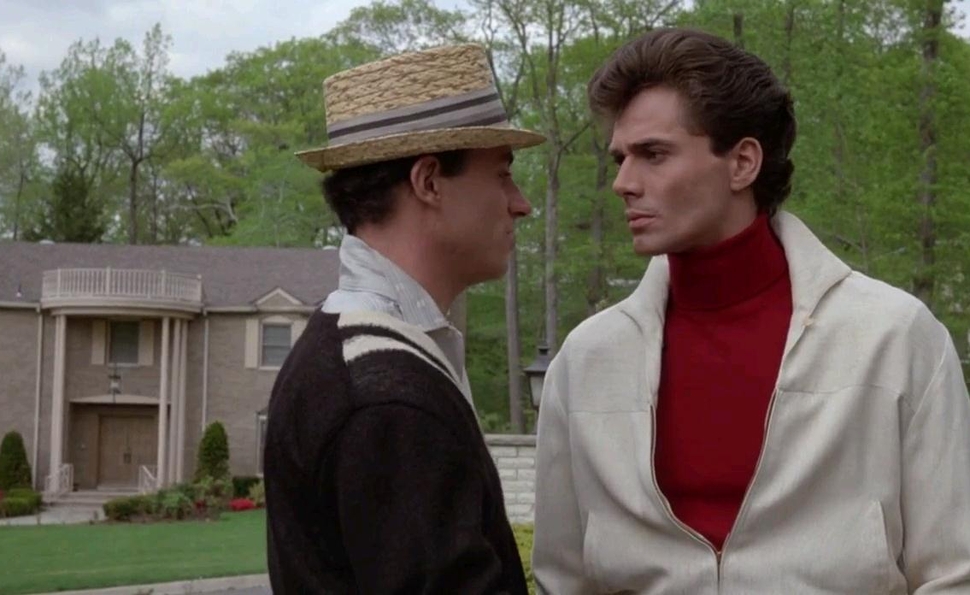 There are three idols in the 1980 drama The Idolmaker. The first is Tommy Dee (Paul Land), a lanky saxophone player who tries to become a rock ’n’ roll singer in the early 1960s, and quickly fills the void left in teen girls’ hearts when Elvis enlists in the Army. The second is Guido (Peter Gallagher), a timid pretty boy who changes his name to Caesare and agrees to do whatever it takes to become a star. And then there’s Vinnie Vacarri (Ray Sharkey), the mastermind behind Tommy and Caesare’s careers. Based on real-life music-promoter Bob Marcucci, Vinnie is the idolmaker of the movie’s title. But he’s also presented as a legend, as big as any of his clients. When he first appears in The Idolmaker—walking the streets of his Italian-American New York neighborhood in 1959—Vinnie has a stack of movie magazines under his arm, for research on what the public wants and how to give it to them. Though he goes a little overboard in pursuing his dreams, The Idolmaker never wavers from showing Vinnie as the shrewdest dude in the room.

The Idolmaker arrived maybe a few years too late, or way too early, for the kind of movie it’s meant to be. Producers Gene Kirkwood and Howard W. Koch Jr. met Marcucci—the man behind Frankie Avalon and Fabian—and found his story so compelling that they knew there was a movie there somewhere. Edward Di Lorenzo wrote a script that tried to capture the warts-and-all nature of showbiz, where money buys access and access helps sculpt the public’s taste. Taylor Hackford signed on to direct, looking to evoke the DIY quality of early rock ’n’ roll and the world of shady deals from which these characters emerge. The movie’s two main aims—to blow the lid off the music business and to exalt some of the unsung heroes of American pop culture—are somewhat contradictory, and haven’t been worked into a polished narrative. If it had been made during the “New Hollywood” of the early 1970s, The Idolmaker might’ve been more of a slice of life, with its shapelessness less of an issue. If it’d been made closer to today, it might’ve been edgier and cutting about the venality of pop music. As it stands, The Idolmaker is a rough three-way character sketch, taking the form of a series of filmed anecdotes.

But those anecdotes have an authentic quality that’s hard to fake. The music is all wrong—it’s more 1980 Top 40 than Fabian—but The Idolmaker is filled with scenes that are smarter than the average backstage musical. The movie is a two-parter, really, with the first part showing Vinnie supplicating himself to DJs, magazine editors, and financiers in order to get Tommy Dee onto the charts, and the second half showing Vinnie wielding his new power to get the music-business machinery to work for him on Caesare’s behalf. It’s fascinating to watch Vinnie manipulate the system, while molding his two boys into every teen girl’s fantasy: sexy, but not too sexy, and accessible, but still mysterious.

Much of that fascination is due to Sharkey’s performance as Vinnie. A powerhouse actor who died at 40 of AIDS complications (after possibly acquiring HIV through years of drug abuse), Sharkey might’ve been one of the all-time greats if he’d handled his private life differently, and The Idolmaker shows off his versatility. Sometimes the magnificence of Sharkey’s performance is in the small gestures, as when he expresses Vinnie’s confidence during a meeting with an agent by making a flawless caesar salad the whole time. Sometimes his moves are more bravura, as when he wins over Guido’s grandmother by speaking to her in Italian, in a scene Hackford leaves unsubtitled because Sharkey can convey the meaning of the words even to people who don’t know the language. The key shot of The Idolmaker has Tommy Dee onstage doing the moves Vinnie taught him, while Vinnie matches him step-for-step in the wings, and Sharkey is so graceful and natural that it’s impossible to watch anyone but him: the idol behind the idol.

There’s only one extra on the Idolmaker Blu-ray, but it’s substantial: a commentary track in which Hackford talks about the scenes he re-wrote himself, and the real-life origins of a lot of the characters and moments. Among his revelations: Phil Spector was supposed to do the music, but wasn’t coming up with good enough material, so the filmmakers went to a Spector associate, Jeff Barry, because they wanted the music to be more like the best of the early 1960s than the cheesier pop of Frankie Avalon. That choice costs The Idolmaker some realism, but at least it was a conscious choice, not a mistake made by people who didn’t know any better.