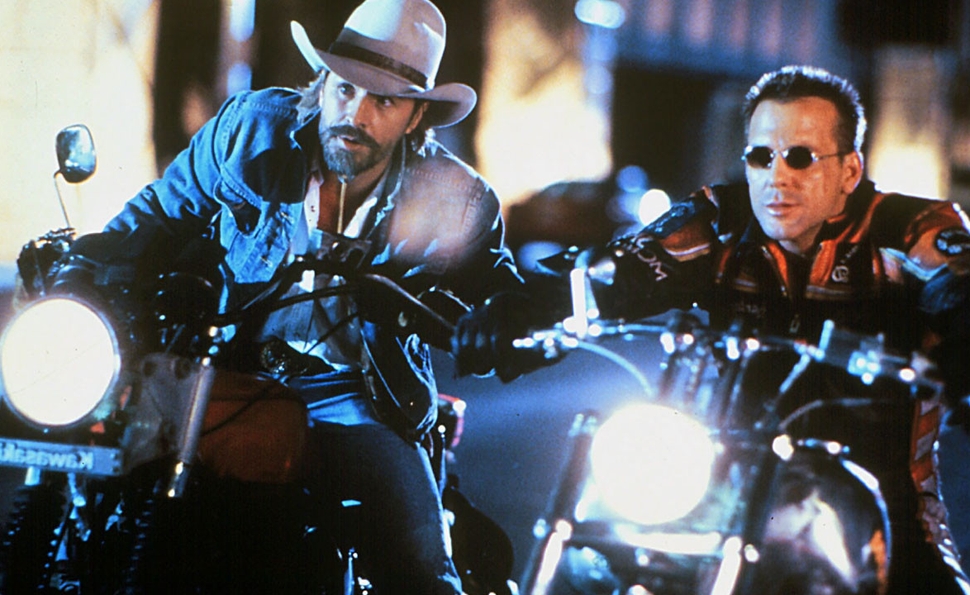 Harley Davidson And The Marlboro Man

What was cool back in 1991, according to Harley Davidson And The Marlboro Man? The Bon Jovi song “Wanted Dead Or Alive,” a kitschy retro-diner in Burbank featuring back-room arm-wrestling contests, bulky black leather trenchcoats that stretch to the ankles and wrap around the neck like one of Maggie Cheung’s cheongsams in In The Mood For Love. “It’s better to be dead and cool than alive and uncool,” says Harley (Mickey Rourke), who’s more philosophical than his buddy Marlboro (Don Johnson), but equally lacking in self-awareness. Though the film is set five years in the future for no discernible reason, it offers up avatars of cool that look like Hollywood extras who left the studio lot without changing out of their costumes. Part of what’s made this middling action movie so durable—besides its ready-made “Movies For Guys Who Like Movies” template—is how endearingly uncool Harley and Marlboro are, as a biker and a cowboy who don’t really belong to any particular time and place. Maybe that’s why Harley Davidson And The Marlboro Man takes place in the future: It’s science fiction.

Harley and Marlboro are the type of guys who live their lives one day at a time; screenwriter Don Michael Paul is the type of writer who puts that into the dialogue. The day these friends get back together for a night of fun in Burbank, they discover the bank wants to shut down their favorite bar and replace it with a skyscraper. So they decide to take action. Assembling a team of expendable roughnecks (including Breaking Bad’s Giancarlo Esposito), they decide to rob that same bank by hijacking an armored truck. But instead of finding cash, they come away with blue bricks of a new designer drug called “Crystal Dream,” a highly addictive hallucinogen that kills one out of seven users. Turns out that evil banker Chance Wilder (Tom Sizemore) is a big distributor. Chance retaliates by sending an army of machine-gun-strapped, slick-haired goons (led by Daniel Baldwin) after Harley and Marlboro, who do whatever it takes to survive, including leaping into a hotel swimming pool 20 stories down.

Harley Davidson And The Marlboro Man courts the type of audience that went for Road House two years earlier, doubling up on rugged, sexy, quietly circumspect men who like a peaceful night at the bar, but will clear the place if pushed. Neither Rourke nor Johnson have anything close to Patrick Swayze’s Zen charisma, however, and the film struggles to compensate with spasms of Walter Hill violence and a little bit of T&A. (Chelsea Field is third-billed as “Virginia Slim,” a police officer with a thing for Marlboro, but if not for a sequence that offers a high-speed motorcycle chase as foreplay, she’d have no place in the movie. Vanessa Williams and Tia Carrere have even less to do.) At least the film has a reasonably keen sense of its own vulgarity that helps it claim the “dumb fun” mantle, especially when Baldwin and Sizemore sleaze it up as the bad guys. It’s hard to hold too much against a film where Sizemore toggles between a teleconference with Japanese businessman and a mortal fight against our heroes like he’s clicking call-waiting on a telephone.

Still, the stupidity burns a little. Here’s a film that pits two self-styled rebels against corporate interests, but names them Harley Davidson and the Marlboro Man, in tribute to the companies responsible for their cool-guy image. In truth, Chance Wilder is the real rebel in the film, since the worst bankers usually involve themselves in white-collar crime rather than using the resources at their disposal to fund a ruthless designer-drug operation. The eventual victory of Rourke and Johnson’s characters isn’t a victory for individuality, but a triumph for brand loyalty. Sometimes riding hogs and smoking cigarettes is playing The Man’s game.

The original trailer builds off the “Rule number one, rule number two” rhetorical device that was popular in action films of the period. And a six-minute vintage featurette focuses heavily on the screenwriter, who’s strongly convinced he’s made the coolest movie ever, and Rourke, who concedes Johnson was an “okay guy” to work with.