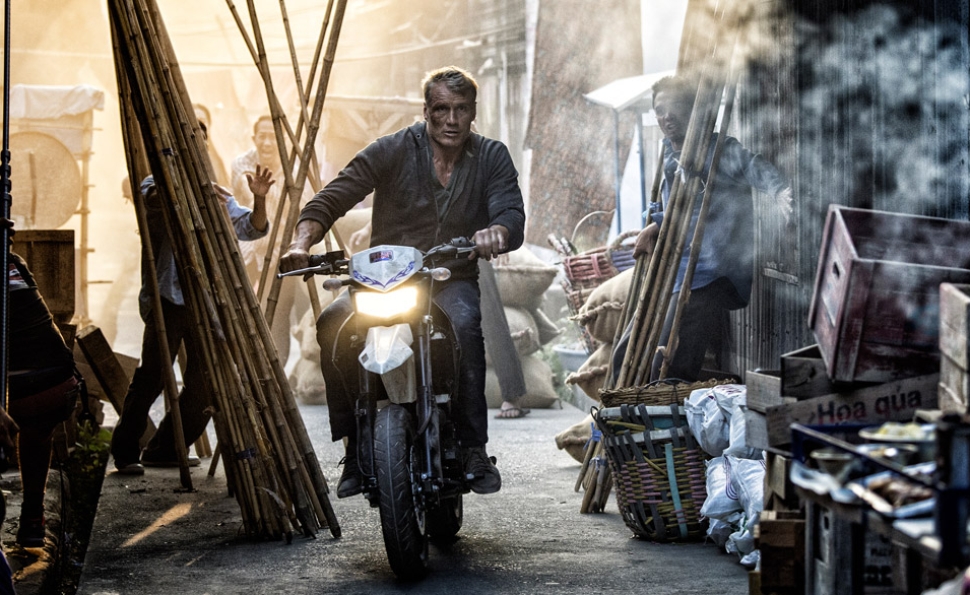 The international actioner Skin Trade closes with some sobering figures about human trafficking—how it sweeps up 20-30 million people worldwide, 98 percent of them women and children. Dolph Lundgren and Tony Jaa cannot save them all—though the door is left open for a sequel—but they’re determined to make a dent in the numbers, as well as the skulls of Eastern European gangsters operating out of Thailand and Cambodia. The stats on human trafficking are shameless window-dressing, a righteous premise for ass-whoopings more than a sincere appeal to the slumbering consciences of the action faithful. But that sliver of social import helps explain the neither-here-nor-there quality of the film: It can’t be an out-and-out exploitation movie, lest it undercut its message on the evils of sex slavery, but it’s not really genuinely interested enough to get the details right. It’s all a pretext to home-video-friendly mediocrity.

After a needlessly complicated setup that posits Skin Trade as the splashy global production that it transparently is not, the film focuses on New Jersey detective Nick Cassidy (Lundgren), who’s trying to bring down a Serbian gangster named Viktor Dragovic (Ron Perlman). Nick and his cohorts—including Michael Jai White and Peter Weller, part of a cast stacked with good character actors—stage a successful sting operation at a port where Dragovic is expecting his latest shipment of women from Southeast Asia. But Nick kills Dragovic’s son in the shootout, and when Dragovic is released on bail, he takes revenge by blowing up the detective’s house, leaving his wife dead, his daughter missing, and him in the hospital with several gunshot wounds. Once revived, Nick flies overseas to stop Dragovic’s business in Thailand and Cambodia, but that sets him against Thai detective Tony Vitayakul (Tony Jaa, of Ong-Bak fame), especially when Nick is framed for the murder of Tony’s partner. Both Nick and Tony want to fight human trafficking, but they have to fight each other first.

Lundgren has been a durable fixture in generic action fare since the 1980s, and with Skin Trade, he continues a recent trend of taking more of a creative hand behind the scenes. He wrote this film with two other credited screenwriters, Gabriel Dowrick and Steven Elder, and while the dialogue isn’t exactly Mametian—or Schwarzeneggerian, for that matter—he makes himself a noble hero and keeps the emoting mostly within his limited range. His physical contrast with Jaa is the main attraction here—Jaa a slight but exceptionally nimble martial artist, Lundgren a block of concrete—but the contrast is at least as dramatic in their performances, which are like balsa wood and oak. Their two big fight scenes are a treat, especially an extended showdown in a grain warehouse that approaches the absurdity of Roddy Piper and Keith David in the alleyway in They Live. But those sequences are an oasis in a desert of banality, livened up only by Perlman affecting a peculiar accent and playing his generic super-thug to the hilt. Everyone’s there to get the job done, Dolph Lundgren style, meaning Skin Trade is a throwback to the one-man-army actioners of the ’80s, sprinkled with updated stats on human trafficking. If the film happens to raise awareness, then that’s more bonus than objective.