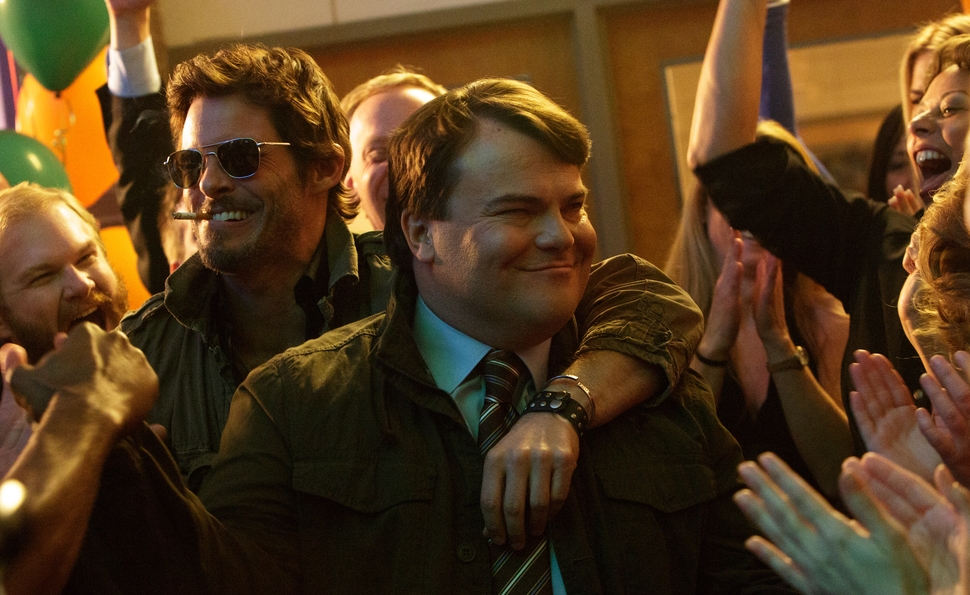 Life doesn’t offer many more obvious moments to pause and reflect than high school reunions. Once a decade they provide reminders of how much time has passed and how far life has taken you—and an occasion to ponder whether it’s taken you far enough. For Dan Landsman (Jack Black), it offers a chance to reflect on how little has changed in 20 years, even though he now has a wife (Kathryn Hahn, not given enough to do) and two kids. A member of the committee in charge of bringing the Class Of ’94 back to his Pittsburgh suburb, he makes call after call to ensure a healthy turnout. In the process, he hears from people who don’t remember him even once he stops using his self-appointed nicknames (“D Rock,” “D Smoove,” etc.). “No, I don’t think I still suck,” Dan tells one former classmate who sounds unlikely to put the reunion on the calendar.

Even his fellow committee members shun him, which prompts Dan to go big. Spying Oliver Lawless (James Marsden), their class’ Big Man On Campus, in a commercial for Banana Boat sunscreen (“for men”), Dan makes up a business meeting in Los Angeles on behalf of the struggling consulting firm where he works for his behind-the-times boss Bill (Jeffrey Tambor). His goal: Get Oliver to the reunion. But when Oliver agrees to meet him for a drink, the mission starts to drift. Still the coolest person Dan’s ever met, Oliver draws him in with casual talk of bisexual escapades and his professed friendship with Dermot Mulroney (who turns up in a cameo as himself). Over the course of a couple of drunken, drug-fueled trips through L.A.’s nightlife, the reunited acquaintances drift toward an evening that leaves Dan rattled and questioning everything he thought he knew about himself. Then Oliver shows up for the reunion, happily taking Dan up on his offer to stay at his house.

The directorial debut of Andrew Mogel and Jarrad Paul, a writing team best known for penning Yes Man alongside Nicholas Stoller, The D Train hangs some inspired ideas and winning comic moments on material that’s not strong enough to support them. Tambor and Black have several terrific scenes in which Dan takes advantage of his boss’ computer illiteracy to support the fiction of his L.A. trip, including his insistence that Google is an outmoded, unreliable way to search the Internet. Marsden’s best scene involves giving Dan’s teenage son tips on making it through his first threesome via an elaborate metaphor involving patio furniture and lawn care. Yet for a film about moments of reflection, it’s strangely unreflective. Dan rides a roller coaster of emotions after his L.A. trip, becoming newly confident then nervous then angry, but The D Train never offers much insight into why, and what the events of L.A. mean to him. Black’s performance attempts to fill in the blanks with a lot of familiar tics: the nervous blustering, the insistent stare, the rocker-dude inflections. After Bernie, it feels like a step back, but its shallowness keeps with the film around it. Marsden, who’s proven himself an able comic actor, hits a similar wall with his character, who seems to lose dimension the more time he spends on screen.

Produced by Mike White, whose script for School Of Rock gave Black one of his best roles and who also has a small part here, the film resembles efforts like Year Of The Dog and White’s HBO series Enlightened, which get their charge from their unwillingness to reveal how sincerely they take the sometimes extreme mid-life awakenings of their protagonists. The D Train attempts something similar, but without ever defining what’s going on. It’s never clear what Dan wants instead of the life he has, or what Oliver means to him. And while it’s to the film’s credit that it doesn’t play Dan and Oliver’s night together as a joke, it also doesn’t really have a take on what happens beyond it not being a joke. Like the night itself, The D Train feels half-considered.