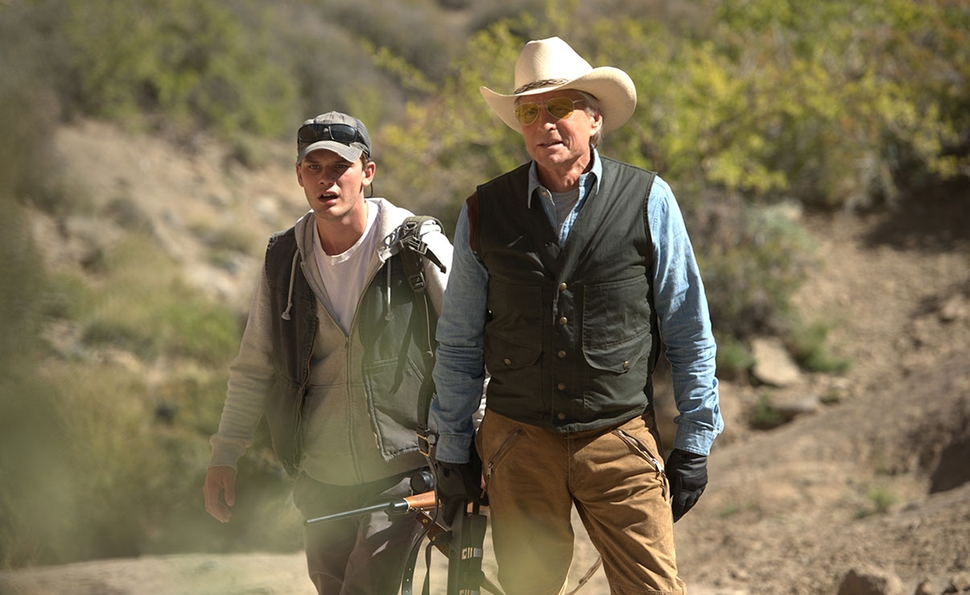 If even the best-laid plans of mice and men tend to go awry, poorly conceived plans hatched by thinly written characters don’t stand a chance in hell. Hell just happens to be at the center of Jean-Baptiste Léonetti’s Beyond The Reach, in the form of a baking-hot desert populated by two kinds of people: murderers and victims. Although the film, based on a 1972 young-adult novel with the far spicier title Deathwatch, aims to puts a compelling twist on the “most dangerous game” trope, its few good ideas are overshadowed by baffling character decisions and grating plot twists.

Ben (Jeremy Irvine) comes from a family of wilderness guides and animal trackers, but that didn’t keep his parents from succumbing to some sort of nameless tragedy during the course of their work, and it doesn’t keep him from having nightmares about the desert area where most of his gigs take place. Who can blame him, though? That desert area—called “the Reach,” because this film needed a title—is filled with all sorts of horrible things, and it’s only about to get worse. Despondent over his girlfriend’s departure for college, sulky, cash-strapped Ben agrees to accompany John Madec (Michael Douglas) out into the Reach to hunt bighorn sheep, the last large game Madec needs to complete a set that impressively includes rhinos and elephants.

But Ben isn’t all that impressed with the big-talking Madec, whose personality and style don’t much suit the guarded young guide. (Ben isn’t a big talker, which could be a product of Irvine’s increasingly poor attempts at a workable American accent, or his generally emotionless character.) Madec is a corporate big shot, the kind of guy who thinks nothing of occupying three parking spots with his one-of-a-kind Mercedes-Benz beast, complete with an espresso machine and a convection oven capable of turning out restaurant-quality steaks. He’s never encountered a problem that couldn’t be solved with money, and he thinks the rules don’t apply to him, because they don’t. Douglas revels in the role, zinging between salty bits of ham (including a genuinely unsettling Wall-E impersonation) and moments of menace that often elevate the film’s thinly written tension.

The mismatched pair head out into the Reach, ready to hunt. Madec is eager to bag his kill, and when the pair spots movement early on, Madec ignores Ben’s advice and fires without thought. (So much for those touted hunting skills.) Unfortunately, Madec hasn’t felled a sheep, he’s shot a local prospector. It’s obviously an accident, but Madec, who boasts that he’s a “fast thinker,” seems to believe a convoluted plan involving murder, blackmail, kidnapping, and other forms of mayhem is preferable to telling the truth. It’s a bad decision, one that’s hard to believe given Madec’s obvious status (doesn’t this guy have a lawyer?), and will only lead to still-more-baffling narrative jags.

Although paying off the shell-shocked Ben initially seems like a workable solution, Ben’s emotions (still flat, however) get the best of him, and the young guide makes the mistake of betraying a handshake deal that would have exonerated Madec. Intent on doing away with loose ends, Madec sends a nearly naked Ben out into the Reach, believing he can pass off the entire tragedy on his guide, who will presumably be found burnt to a crisp somewhere in the Reach while Madec watches from above.

Despite Madec’s apparent experience with big-game hunting, and his superior equipment, he isn’t very good when it comes to targeting his quarry. He’s given to impatience and cheap shots. (Douglas, at least, gets to have some fun in that massive Mercedes, and the actor doesn’t so much chew the scenery as drink it right up. He’s a thirsty man in that vast desert.) But where Madec is a bad hunter, Ben is a worse guide, unable to use his own wiles to approximate even basic survival. Instead, he’s beholden to a cache of vaguely helpful items that he only finds with the assistance of an actual treasure map.

Beyond The Reach is set up as a battle of wits that relies on the apparent skill-sets of its two lead characters. But the film barely allows either Madec or Ben to use their brains before piling on cheap plot points—like that treasure map, or a few handy sticks of dynamite, or a major business deal—to push its underwritten story forward. The film leans heavily on well-trod “most dangerous game” territory, but the insistence on inscrutable characters and cheap twists never lets it feel actually dangerous. It just feels vacuous.