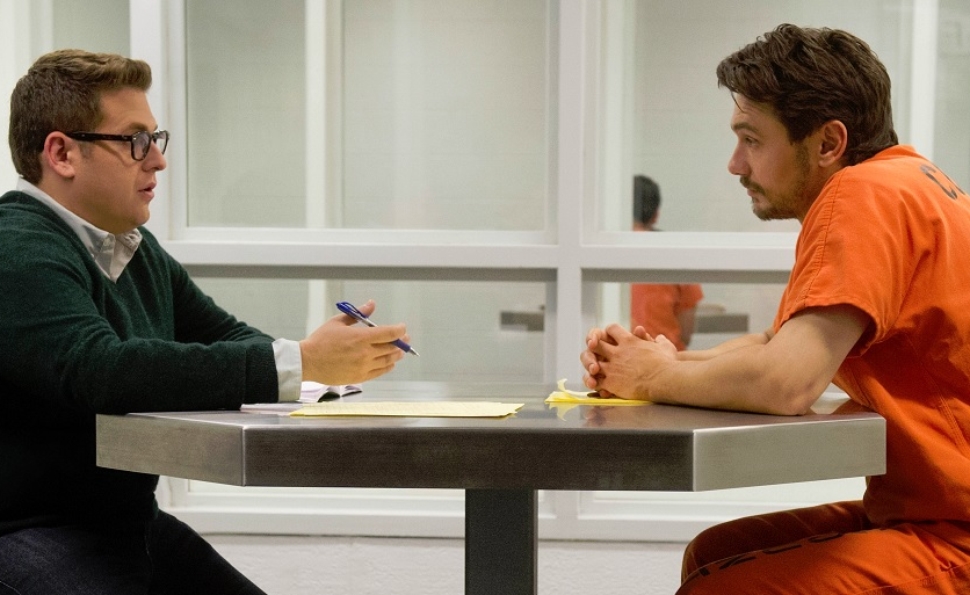 Making a movie out of Michael Finkel’s book True Story: Murder, Memoir, Mea Culpa is such a great idea that someone should try it again—someone with a stronger point of view and a more jaundiced eye. Finkel wrote the book at the low point in his professional career, after he was fired for building his latest New York Times Magazine cover story, “Is Youssouf Malé A Slave?,” around a composite character. Was this a one-time-only case of coloring outside the lines, or Jayson Blair revisited? Though a reasonable consensus points to the former, fabulists of any stripe are instant pariahs in the journalism world, whether they’re first-time offenders or serial liars, so Finkel was staring at a steep incline on the road to redemption. But the subject he wound up investigating for the book put him on inherently shaky ground: Christian Longo, a man accused of killing his wife and three children, who also happened to use Finkel’s name as an alias while hiding out in Mexico. This was a collaboration between an unreliable narrator and an unreliable narrator.

One stop removed from Finkel’s book, co-writer/director Rupert Goold has an opportunity to get a larger perspective on Finkel’s rehabilitation and play around with the self-serving narratives advanced by both men. True Story is about the slippery nature of truth, after all, and deception is one of cinema’s greatest strengths, given that the medium itself is rooted in illusion. But Goold, a highly regarded British theater director making his debut feature, lacks the panache to realize this twisted relationship onscreen. Instead he’s made a stolid, well-acted, intelligent drama that respects the complications of Finkel and Longo’s storytelling agendas without bringing them to life. Merely adapting Finkel’s book thoughtfully and respectfully isn’t nearly enough.

True Story starts with Jonah Hill as Finkel in Africa, collecting details for the Youssouf Malé story in a confusing swirl of facts and translated conversations that make it clear just how difficult it can be to do journalism right. Nonetheless, the piece gets called out after publication, and his Times editors issue an embarrassing correction and show him the door. After retreating to his Montana home, Finkel learns that Longo (James Franco) has been using his name and occupation as an alias in Mexico, so he decides to visit the now-captured Longo in Oregon before his trial. So begins a close collaboration between two men with agendas that coincide in some respects, and conflict in others. And it’s on Finkel to sniff out the truth; he’s like a bloodhound with a nasal infection.

Hill and Franco do fine work as Finkel and Longo, but their jailhouse meetings don’t have the Lecter/Starling psychological tension the film likely intended. Longo’s manipulations are sinister, but don’t carry the same menace. Goold tries to complicate the film with flashbacks from multiple perspectives, and by elevating Finkel’s girlfriend Jill (Felicity Jones) from thankless sounding board to a more active player in the narrative. But True Story nonetheless misses the chance to rise from solid true-crime time-passer to the Brian De Palma movie it might have been. Keep in mind: The real-life Finkel still talks to Longo on the first Sunday of every month. That fact alone is more troubling than anything in True Story.