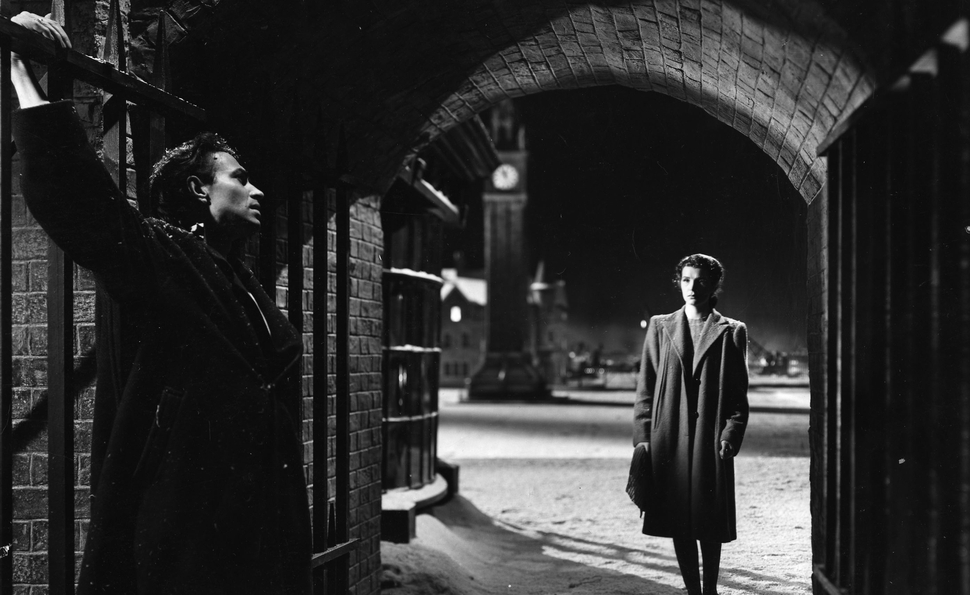 Anyone taking a third pass at a film adaptation of Lolita might want to pause and consider whether James Mason’s 1962 performance as Humbert Humbert could ever be surpassed. Whatever flaws Stanley Kubrick’s film has, Mason isn’t among them, thanks to his particular gift for making his every word and gesture—no matter how unreasonable—seem like the result of great deliberation. He was uniquely suited to embodying Humbert’s self-deluding romanticism. Mason could use his gentle, persuasive voice and soulful eyes to mask almost any kind of monstrousness, from his treachery in North By Northwest to the madness into which his character descends in Bigger Than Life. But he was just as skilled at using those qualities to portray genuine internal conflict, as he does throughout Carol Reed’s Odd Man Out. Even as reason starts to abandon him, he makes his character seem like a man attempting to figure it all out before it’s too late.

Set in an unnamed city in Northern Ireland, Odd Man Out casts Mason as Johnny McQueen, a leader of a militant political organization just as clearly modeled after the IRA as his city is modeled after Belfast—a source of inspiration some location shooting and the incorporation of famous landmarks does little to obscure. Hiding from the law, Johnny has spent months confined to a spare bedroom in the family home of Kathleen (Kathleen Ryan), a sympathizer who does little to hide her feelings for him. Addressing his cell as they prepare to rob a mill to raise money for their cause, Johnny shares his wish that they could achieve their goals without violence—then commits to the robbery anyway, even though those around him suspect he’s grown weak as a result of his isolation. The robbery itself seems to prove them right. Exiting the mill, Johnny hesitates, then gets drawn into a fight with a security guard that leaves the guard dead and Johnny shot and grievously injured, forced to take refuge in an air-raid shelter, then to seek safety as he grows increasingly weaker from the injury. The journey takes him from one end of the city to the other, doubling as as a tour of his home’s diverse citizenry—and providing repeated reminders that he may no longer have a place in it.

Odd Man Out opens with a curious, but accurate, title: “This story is told against a background of political unrest in a city of Northern Ireland. It is not concerned with the struggle between the law and an illegal organisation, but only with the conflict in the hearts of the people when they become unexpectedly involved.” The film’s politics couldn’t be fuzzier. Where, by all accounts, F.L. Green’s novel took a condemnatory point of view that sided firmly with the loyalists, Reed’s film never gets into the broad strokes of The Troubles, much less the particulars. He never comes down on one side or another. Johnny is very much the center of Odd Man Out, making it impossible not to worry about his well-being, even if he weren’t played by an actor as naturally sympathetic as Mason. Yet he’s also presented as a flawed man in the grips of inner turmoil, from the film’s first scene to its last. It’s a film about The Troubles that is, in a larger sense, not really about them at all, making Johnny a sort of everyman forced to navigate a morally murky post-war urban space defined by its shadows.

If that makes it sounds like Odd Man Out’s unnamed city overlaps with the territory of film noir, there’s good reason. Working with cinematographer Robert Krasker—with whom he re-teamed two years later for The Third Man—Reed uses the language of noir to define Johnny’s journey. He finds the city at night a place of stark brickwork, rain-slicked streets that reflect back the light of the street lamps, and in the film’s final third, gentle, insistent, ominous snow. What begins as an exercise in realism that includes an exceedingly quiet, civil robbery sequence, become increasingly expressionistic as it goes along. The mood shifts with the characters Johnny encounters as well, turning hallucinatory as he falls into the company of the mad artist Lukey (Robert Newton, best known for his pirate roles, and unafraid to go big here), who wants to paint him while his face holds the special qualities of a man on the verge of death.

That’s ultimately the other journey Johnny is on, one announced from the beginning by William Alwyn’s somber score. Reed’s film is about a man stumbling across a particular city at a particular time and place, but it never tries to hide its symbolic significance. Johnny loses his certainty even before he becomes injured. He weakens as he walks through a darkening cityscape, unsure of whether can trust what he’s seeing, and increasingly unable to make sense of it all. And though he has little coherent dialogue after a certain point, Mason is ideal as the embodiment of unsteadiness, physical and moral. Wandering the streets that made him, he struggles to steer away from the dead end he knows he’ll eventually hit.

Context helps frame a film like Odd Man Out, and film scholar John Hill helps provide it by positioning Odd Man Out in the continuum of films about The Troubles. An additional short documentary about the history of the film, and where it falls in Reed and Mason’s careers, helps as well, as does a look at Alwyn’s unusual compositional process, which involved writing pieces of score music before the film was shot, and working carefully with the sound team to synchronize music with diegetic sound effects. Mason also reprises his role for a 1952 radio adaptation. The longest feature, however, has little to do with Odd Man Out, at least directly. The 1972 documentary Home, James follows Mason as he returns to his Yorkshire hometown of Huddersfield. Yet, like Odd Man Out, it’s another depiction of the many ways people can be shaped by the world in which they grow up.