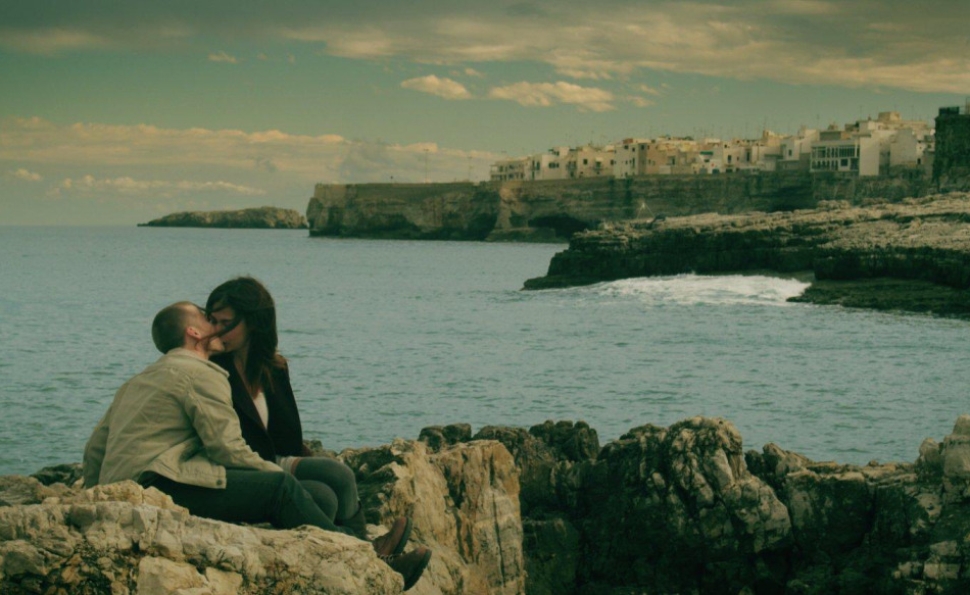 The directing team of Justin Benson and Aaron Moorhead are aware it’s been done before. That was the lesson—and the starting point, really—of Resolution, their fiendishly clever debut feature, an exercise in meta-horror that picked apart the genre’s tropes while serving as an effective example of them. Benson and Moorhead’s beautiful follow-up, Spring, accesses the popular realm of supernatural romance from the side entrance, conscious not to tread on the same ground flattened by Twilight, The Vampire Diaries, and other YA sensations. It’s made for a different species of young adult, for one, but more than that, Spring is only interested in the supernatural insofar as it serves as a metaphor for the dangers of intimacy. Long stretches of the film could be mistaken for one of the Before Sunrise movies, if it didn’t have that darker edge, that threat of a relationship getting smothered before it has a chance to turn into something real. Benson and Moorhead take the fear of commitment to a literal place.

Expressing grief, desire, and the particular confusion of a twentysomething whose shit needs sorting, Lou Taylor Pucci is superb as Evan, a college dropout who put his life on hold to take care of his ailing mother. When his mother passes, Evan finally has the chance to crawl out of his dead-end bar job, spurred along further by a fight that has the local police looking to bring him up on assault charges. With a fistful of inherited cash, Evan impulsively books a flight to Rome and meanders to an idyllic village on the Mediterranean, where he’s thunderstruck by Louise (Nadia Hilker), a beautiful, mysterious young woman who invites him to her bed, but resists his counteroffer for a date first. Louise’s motives are clarified later, but Evan wears down her defenses and the two have a hot-and-cold romance that confuses Evan until he discovers more about her.

After the homemade, mostly single-location video of Resolution, Benson and Moorhead use a larger budget to make a striking seaside locale of villas, cafés, hidden alleyways, and imposing cliffs seem simultaneously swooningly romantic and suffused with danger. Though there’s plenty of witty banter between Evan and Louise—and convincingly stupid banter between Evan and his bros—Spring is refreshingly sincere and emotionally direct in addressing his confusion and grief, her standoffishness, and the hiccups in their relationship. The film also carves out room for lovely subplot involving Evan and an old Italian widower (Francesco Carnelutti) who gives him a room in exchange for help tending to fruit trees. Spring’s overall balance suggests that Benson and Moorhead are students of Italian genre cinema and of human behavior; the film has insight and style to burn.

Though Spring is best experienced cold—this review has been as studiously vague as possible—its twists don’t define it. Where Resolution had a clever-for-its-own-sake quality embedded in its conceit, every development in this film serves the complications of its central relationship. The horror here is just a means to heighten the emotions and work the stress points of a romance where natural fears—of women on Evan’s side, of commitment on Louise’s—are rendered supernatural. When it comes, the explanation for what’s actually happening is absurdly elaborate, but even that pays off in a beautiful final scene that encapsulates the whole film’s sun-touched, feverish allure. This is YA that emphasizes the “A.”