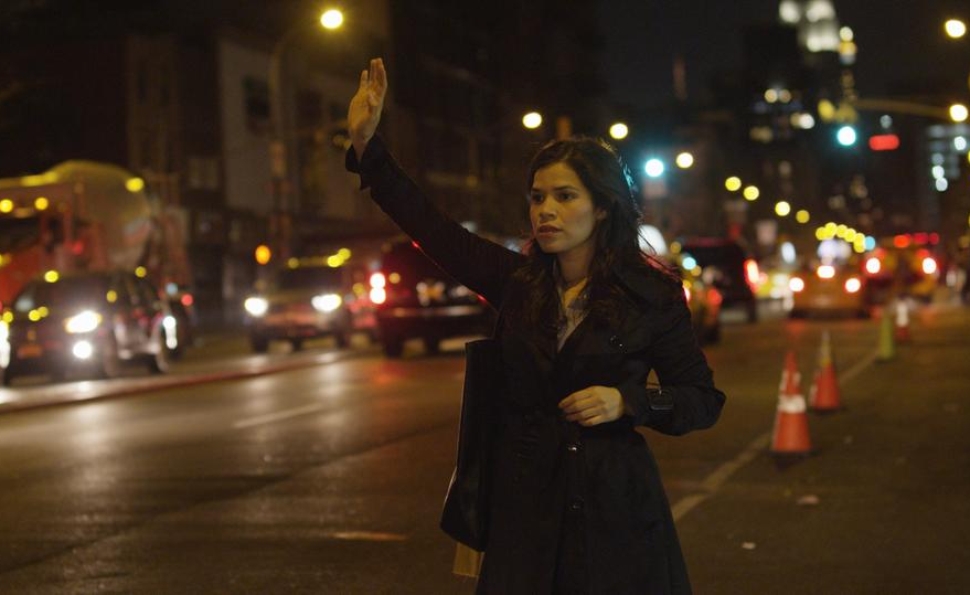 X/Y, a new moody yet staid indie romance from writer-director Ryan Piers Williams, begins with a sex scene between longtime lovers Mark (Williams) and Sylvia, played by America Ferrera, one-time star of The Sisterhood Of The Traveling Pants. (She and Williams are married). They grind on one another for a minute or so until Sylvia achieves orgasm and declares, “I’m done.” Mark notes that he’s not, and they continue to flop about for another halfhearted minute until he calls it quits, clearly aware that his partner has lost that lovin’ feeling.

A Whitman’s sampler of romantic fizzlings in the vein of Mark and Sylvia’s coitus givinguptus fill out X/Y’s svelte 82 minutes. Over the course of a handful of loosely interconnected vignettes, a quartet of good-looking thirtysomethings traverse a palpably recognizable New York in search of something they can’t put their fingers on. (Or more frequently, body parts located further south.) Williams suffuses the members of his lonelyhearts club with that vaguely poetic strain of alienation that germinates in urban centers, finding isolation in the sensation of being beset on all sides by strangers. The trouble is in Williams’ execution: His characters convincingly strive and struggle with love, but then go ahead and express their angst in the most typical, banal ways imaginable.

The film plays out in four segments, each demarcated with needless title cards that betray the hand of an unsure writer. Mark is first up: In response to a rough patch with Sylvia and a studio sanding the edges off his screenplay, he initiates an ill-begotten one-night stand with a stranger (Ferrera’s fellow pant-sister Amber Tamblyn). Next comes Jen (Melonie Diaz), who’s starting to realize she may not be as happy with her rotating carousel of no-strings-attached boytoys as she once believed. Jake (Jon Paul Phillips) torpedoes a date with a perfectly pleasant model because he isn’t entirely over his ex, then discharges his sexual energy in an unlikely outlet. Sylvia takes center stage last. Turns out a quickie in the supply closet with a sexy coworker (Common) can only provide her with so much satisfaction before uncomfortable questions come creeping back.

At best, the free-standing episodic structure emulates the feel of a good short story, with circumstances carefully building up to small moments of epiphany. At worst, it feels like a pack of student films halfheartedly strung together to feature length. The vignettes all follow a similar pattern: Characters feel frustration in their personal or professional lives, stumble into or out of possible liaisons, then (here’s where things get absolutely insufferable) spend a small eternity sadly staring off into space. It seems like an unfair criticism—how else is a director expected to convey sadness than to show his characters being sad?—but Williams’ formal shortcomings rob the film of what should be a solid emotional heft. A film with such a slim runtime has no excuse for spending so many frames treading water. There’s a fine line between “pensive” and “slog,” and Williams extends his toe over it too often. He also adopts a frightfully unimaginative visual language in these moments of solitude, stranding his actors with no life preservers save a filter filched from Instagram and the occasional well-selected needle drop. (Chromatics’ “Cherry” finally fulfills its destiny by soundtracking late-night metropolitan melancholia.)

Those moments notwithstanding, Williams shows a lot of promise as a writer and a director of actors. With clear eyes, he sees the way people repress and displace emotion, externalizing self-loathing and internalizing confusion, insecurity, and the universal drive for a warm body at the end of the night. He puts a lot of trust in his ensemble and they deliver, turning out surprising flashes of vulnerability. Ferrera rises to the top, giving an unshowy yet potent performance.

Williams has claimed he intended the title X/Y to refer to the awkward technological gap between generations, with the X-ers mostly settled down and Generation Y speaking Tinder like a native tongue. But the title is better read as a comment on the film’s undercurrent of disconnect between the sexes. Long-time lovers fall out of sync, steamy hookups turn into missed connections, and, as is the case in all indie dramas featuring characters between the ages of 20 and 40, everyone’s just trying to figure things out right now. As a director, Williams has a lot going for him, but ultimately, he’s still finding himself, too.